The Cross in Our Life 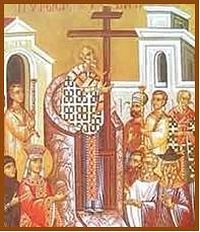 Many heretics of our time don’t believe in the cross, even if they may call themselves Christians. Some pop stars and actors wear the cross, but by the witness of their lives we can assume that they don’t put much value in the cross except as an empty symbol. There is nothing new under the sun and there have always been accusation against our Church. In the second century, Christians were accused of practicing incest, of being cannibals, of being ignorant and of being bad citizens. The most dangerous accusation was that the Christian teaching was unreasonable. This idea purported that the incarnation was nonsense; God would not lower Himself to become a tiny baby or to be crucified as a common thief.

At the peak of these accusations was that Christians worshipped a crucified animal. In the excavation of the old city of Rome, a stone was discovered which pictured a crucified person, who had the head of a donkey. This picture was drawn to ridicule the Christians who worshipped someone who had been crucified.

In response to all these accusations, Christians pointed to the injustices. There were no secrets among Christians. Christians were good citizens and Christianity was a reasonable belief. The death of Christ was the supreme sacrifice! The cross is not just a symbol or piece of material in our life. “For the message of the cross is foolishness to those who are perishing, but to us who are being saved it is the power of God” (1 Cor. 1:18).

Without the Holy Cross of our Lord and deep understanding of our faith, we manifest the same accusations. Faith and knowledge must go together. Faith alone leads to superstition and knowledge alone is limited to facts. The process is called Transformation which means transfiguring ourselves to a better understanding of faith and a better life in light of the Holy Cross.

Our prominent St. Ignatius, Bishop of Antioch (AD 115), struggled to disprove and refute two contemporaries of the Christian faith:

1. Orthodox Judaizers, who were relapsing to the Old Testament thinking that Jesus was merely a prophet who was above passion and crucifixion. They found the Old Testament a relaxing religion in which the cross did not exist.

2. The so-called Docetism, which asserted that Christ had not really come in the flesh and was not really crucified; He only appeared to be crucified.

These two heresies resisted Orthodoxy throughout the history of Christianity taking different forms. History reveals how foolish and scandalous the cross seemed to many religions; to Jews, Judaizers, Gentiles and Moslems.

These heretics still exist in our age because many are convinced that the prophets and the Son of God are above the punishment of crucifixion. To them, only condemned personas are affixed to the cross to await death. These tendencies were always disproved by the fact of Jesus’ birth in the flesh and Jesus’ death on the cross. Jesus’ death on the cross marked the end of the Law of the Old Testament (Gal 3:13).

Jesus was lifted up on the cross as Moses lifted the serpent in the wilderness. What is this serpent which was lifted up by Moses? What is the meaning of the typology? If we go back to the Book of Numbers in the Old Testament, we will see that the people became impatient in the desert and that they spoke against God. Thus, the fiery serpent was sent among the people so that many of them died. These poisonous snakes were a kind of divine judgment on the people’s rebellion against God. So, Moses prayed for the people. And the Lord told Moses to make a bronze serpent and set it on a pole. Everyone who was bitten when they saw it would live. This could be seen as spiritual testing; persecution, difficulty, trial. This whole process is one of self-denying.

Jesus used the symbol of the healing snake as representing His crucifixion and resurrection which heals us from death and sin. The verb “lifted up” has a double meaning. It refers to the cross of Jesus and to His glorification in His resurrection and ascension.

From His analogy, the crowd understood that Jesus spoke about His death, but for the masses of people, Messiah and death were incompatible. When Jewish nationalism was on the rise, the expectation of a Messiah acquired political overtones. The people expected Jesus to be a national leader, a mighty king who would deliver the people from the Roman yoke and restore the earthly kingdom of Israel. The crowds and even the disciples that gladly listened to Jesus shared in the understanding of Messiah. They continued to hold these hopes until the very end. The people wanted Jesus to be a king who would not hesitate to use the sword for the realization of their nationalistic dreams.

Christ’s death on the cross brought salvation (Col. 2:14; Eph. 2:16) and hence, it was the basis for Christian hope. It is the sign of the supreme sacrifice and the resurrection; it signifies life rather than death.

By His divinity He made the cross the sign of the new life. Our cross is through baptism and repentance. For this reason we become communicants of His cross by our baptism, life, struggle and suffering for the sake of Jesus. We cross ourselves all the time – before kissing an icon, when we pray, before we eat, to express the daily experience of the cross. It is the power of God! The cross to the unbelievers is foolishness, but to us believers it is the power of God. Every action of Christ, including all His working of miracles, was truly great and wonderful. But of all things the most wonderful is His honorable cross. For by nothing else, except by the cross of our Lord Jesus Christ, death has been brought low, death has been despoiled and resurrection bestowed. The power given us by the death of Christ, that is to say the cross has clothed us with the wisdom and power of God. This we have been given as a sign on our forehead, just as Israel was given circumcision. For by it, we faithful are set apart from the skeptics and we are recognized apart from unbelievers.

So that honorable and most truly venerable cross, upon which Christ offered Himself as a sacrifice for us, is itself to be adored because it has been sanctified by contact with His sacred body and blood. We have splinters of this most honorable wood as a relic because it touched the humanity and the sacred divinity of our Lord.

We also adore the likeness of the honorable and life giving Cross, even though it is made of another material. We do not honor the material, but the likeness as a symbol of Christ. We preach Christ crucified. Therefore, the sign of Christ in the Cross is to be adored, for wherever the sign may be, there He will be too. If the form of the cross should happen to be destroyed however, the material from which the cross was composed is not to be adored, even if it was of gold or precious stones. We honor the material as a sign of Christ, for wherever the sign is, Christ is there. We also trace this sign upon our bodies and thereby bless ourselves. Thus we adore everything that has reference to God, although it is to Him that we direct the worship.

Deny yourself and carry your cross daily. To build a godly life you must understand the depth of carrying your cross daily. Read the Bible, but don’t read the Bible by itself. Communicate with the person of Jesus! This is your life! Read the Bible slowly and carefully. Read it and pray it at the same time. The experience of Church is in the Bible! The life of the Church is in reading, living and praying altogether. Christ remained silent when Pilot asked Him about the accusations against Him, because He presupposed that Pilot did not understand His theology. Silence has the greatest power to teach. It is the strongest defense. This kind of theology needs peace and silence. The Holy Theotokos kept silent. Protect your families by keeping silent. Carry your cross of poverty, sadness, agony, anxiety, despair or sickness. Carry your cross of the vices gluttony, fornication, avarice, anger, negligence or pride. We must struggle and not give up. Give a work of encouragement. The same Grace is given to all in baptism and in communion. God can heal all. These crosses lead us to confusion, disillusion and pain, but His cross, the TRUE CROSS, leads us to joy and salvation. The Lord’s Way of the Cross
Bp. Alexander (Mileant)

The Lord’s Way of the Cross
Bishop Alexander (Mileant)
And at the ninth hour Jesus cried with a loud voice, saying, "My God, my God, why has Thou forsaken Me?" The word "God" in Aramaic is pronounced "Eloi" or "Eli," as written by the Evangelists. This cry was the expression of the God-man’s deepest sorrow. In order for the sacrifice for salvation to occur, it was necessary that the God-man drink the full cup of human suffering.