Pope: A society that doesn't want children is 'sad and gray' 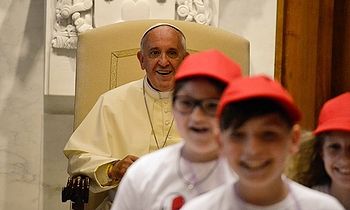 Pope Francis said Wednesday that children are a joy-filled gift for the Church and the world, and cautioned against an overcast society that lacks life because it has rejected and run out of children.

“Children give life, joy and hope. They also give worries and sometimes problems, but this is better than a society that is sad and gray because it has run out of children. Or doesn't want children,” the Pope told pilgrims gathered in St. Peter’s Square for his March 18 general audience.

It is the second time Francis has spoken about children in his general audiences this year. On Feb. 11, he told pilgrims that a society which is “not surrounded by children, that considers them a problem, a burden, has no future.”

On that occasion he also spoke of how children are a gift, calling them “the joy of family and society.”

Children, he said, “are not a problem of reproductive biology, or one of many ways to realize oneself in life. Let alone their parent’s possession. Children are a gift. Do you understand? Children are a gift!” and went on to talk about the free aspect of love they bring to the world.

In today’s audience, Francis reiterated what a “great gift” children are, and said that their weakness and fragility is a reminder for everyone that we are always dependent on others.

“A society can be judged by the way it treats its children,” he said, explaining that they make us realize that “all of us are always children, in need of help, love and forgiveness, which are the conditions in order to enter the Kingdom of God.”

Francis noted that children also help to “dismantle the idea of believing we are autonomous and self-sufficient.”

In his birth, Jesus himself reminds of how we have all at one point in time been totally dependent on the care of others, the Pope said, noting that in his ministry, Jesus gave special praise to the “little ones” who need help, especially children.

Another reminder children give is that we are always sons and daughters, and that as we age, rather than being in “complete control” of our lives, “we never cease being radically dependent on others,” Francis said.

Children “challenge us to see things with a simple, pure and trusting heart, to receive and to offer warmth and tenderness and to laugh and cry freely in response to the world around us,” which is something that can often be “blocked” in the elderly, he noted.

Francis closed his audience by recalling how Jesus, in the Gospel of Mark, beckons the children to come to him, saying that we must all become like a little children in order enter into the Kingdom of Heaven.

“Let us welcome and treasure our children, who bring so much life, joy and hope to the world. How sad and bleak would our world be without them!” Become Children
Fr. Silouan Benedict
Today, after my morning prayers, I had to drop my daughter to school. This is an everyday job, but of all days, my daughter asked me today – Daddy, when I look at the sky, I see the blue sky and the Moon following me, why is this happening ?