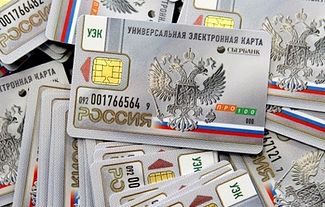 Thousands of citizens of Russia, the Ukraine, Belarus, Moldova and other countries are sending appeals addressed to His Holiness Patriarch Kirill of Moscow and All Russia and the Moscow Patriarchate’s Department for Relations between the Church and Society, reports Patriarchia.ru.

The letters express their concern about use of electronic documents and innovative technology in interaction between citizens and the authority, which leaves no alternative.

The Church is talking about these issues with government agencies, urging them to take into account and understand the position of the faithful, calling upon them to respect the voluntary nature of identity provision and to give people the opportunity to opt for traditional methods of identification. The Church representatives have stated that respect must be shown for citizens’ constitutional rights and that those who refuse to accept electronic methods of identification must not be discriminated against.

In many cases the state authorities heed the words of the Church and the citizens, taking specific steps aimed at ensuring of the equality of rights and respect for religious convictions of believers.

Thus, in November 2014 a citizen of the Chelyabinsk region A. V. Kurilova made an appeal to His Holiness Patriarch Kirill of Moscow and All Russia with the request to help her obtain free medicine for her little son without registration of Insurance Number of Individual Ledger Account.

This document was forwarded to the Department for Relations between the Church and Society for execution. A petition, signed by the Department’s chairman, was sent in to the governor of the Chelyabinsk region B. A. Dubrovsky with the request to assist in obtaining the medicinal product.

At the end of February the Department for Relations between the Church and Society received a response from the first deputy governor of the stating that the boy will be provided with the drug preparation until the end of 2015”. Russian Civic Chamber proposes to ban state funding for abortions
According to Alexander Lyulka, leader of the school of Orthodox missionaries at the Synodal Missionary Department, everybody admits that an abortion means killing. Electronic control to be discussed in the Russian Civic Chamber Religious representatives in Russia express their concern over the introduction of electronic cards
On March 24, 2011, during a hearing in the Civic Chamber of the Russian Federation on "The problem of citizens' refusal of electronic identification documents and provision for their rights," representatives of traditional religions in Russia expressed their general concern over the large-scale project to introduce universal electronic cards (UEC), which could begin in Russia as soon as the year 2012, reports Patriarchia.ru.
Comments
×