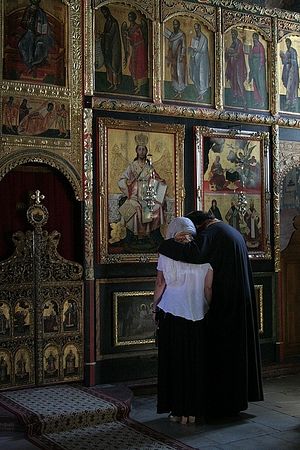 Everywhere he goes, he meets his equals. All of the world is open to him, bidding him enter in, take what he wants and go his way. Early on he learns to negotiate his way through competing crowds of others, jostling for position, asking for attention, making his way forward. His direction is a matter for decision – first this way and then that. He migrates at will, following an inner guide that says, “Go there. Take that. Move on.” He becomes what he wants to be and learns what he wants to know. He chooses his mate and negotiates his marriage, contracting for his happiness. If he chooses, he will have children. If not, he has none. He will turn back disease, and even replace parts and improve his lot in life.

This is the Democratic Man.

Can such a man find God, or even be saved?

That may sound like a strange question, but it lies at the heart of the modern religious crisis. For God is not a choice. He is not just one more product waiting to be consumed or ignored. He is decidedly not democratic. This is a difficult problem, for the habits of the democratic man are utterly unsuited to the spiritual life. In the true spiritual life, you cannot have what you want, or simply go where you would. You cannot choose what you will become or even say just anything. You are free but with a freedom that is a stranger to democracy.

The modern Christian is generally a democratic man. It is a habit of the heart formed by the culture we live in. It forms and shapes us for unbelief and the god of unbelievers. The democratic man cannot believe in God.

He cannot believe in God because the democracy of his heart has no place for true faith. He has the mind of a consumer and wants to choose his faith like he chooses everything else. But we cannot choose to believe or what to believe. Faith is not a choice.

The encounter with God is an encounter that is beyond us. God cannot be known unless He makes Himself known. Faith cannot summon Him or make Him appear. He cannot be managed or made to behave. Even when democratic man convinces others to join in his cause and unite their collective will, God will not be theirs.

The various denominations often represent nothing more than the natural forces of religious democracy. A God whose teaching and revelation morphs and changes and shifts with the culture, now this, now that, and always more accessible and accommodating, is no God at all. He is merely the good god who obeys mankind.

I was recently in an Orthodox Church that was very “old world.” Its habits were formed and shaped in centuries devoid of democracy. The splendor and solemnity of hierarchy were everywhere. Quietness reigned. Certain precincts were off limits. Behavior took on the ritual of a royal court and the hiddenness of certain things was palpable. And strangely, the presence of God was obvious.

“Didn’t you feel it when you first walked in?” A woman whispered to me as we stood in the nave. Yes, I did. And not for the first time. Entering this wonderful cathedral called for leaving democracy at the door. In a few minutes a priest came to me and told me to follow him. I went “into the altar,” passing through the iconostasis that separates the nave from the Holy Place. It is a privilege given to priests – to enter the altar and to serve. But it is never a privilege that can be assumed or demanded. I have no rights. Once in the altar, the priest directed me to his Archbishop, who blessed me and told me that I would be taking part in the service and that I would serve “in English.” He did not ask, he directed. I obeyed.

The democratic heart cannot obey and cannot know the “obedience of faith.”

Christians in the contemporary world struggle with these contradictions. It is clear to most that God cannot be their own invention, and yet they have great difficulty overcoming the inventiveness of their hearts. Where tradition and custom are overthrown, only democracy can reign, and the hardness of the heart begins.

I recall that in the process of my conversion to Orthodoxy – God loomed large, and in a way He never had even though I had served as an Anglican priest for 18 years. The strange conundrum was that every spiritual path in my Anglicanism was still “my” spiritual path, a private “spirituality,” an expression of my Christian style. I was always forced to assert a “position.” I defined myself. Self-definition is an exercise in solipsism, which always excludes God. I could hope that my choices and my style were pleasing to Him, but they were always first and foremost, pleasing to me!

And then came Orthodoxy. But even there the democratic heart finds room for itself. If it were crushed, it would be oppressive. These habits we always find little ways in which to indulge themselves even when they are hedged about with greater boundaries. I sit with fellow priests and share stories of our parish life: “war stories” – battles with parishioners, battles between parishioners, redoubts and trench works dug deeply. Wherever a choice can be made or the ego accommodated, the spirit of democracy will find its way, and there God will be harder to find.

My salvation comes with the increasing loss of my democracy. Wherever my democracy goes, sin reigns. With my neighbor in my parish, my home, my job, I can assert my democratic rights and privileges and create an area where God cannot be known. For in a democracy, I am always god. On the other hand, every encounter can become the Holy Place – that Place where I cannot enter of my own will. There the neighbor can invite me, and I can yield, and so find God.

This writing is a very conscientious og great valuable teaching.

With immense gratitude to the gifted author.