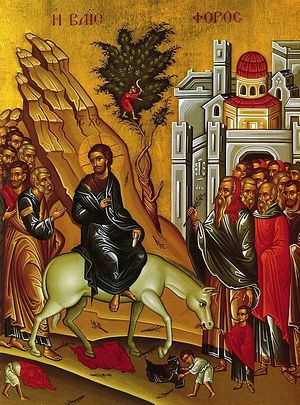 This year while Protestants and Roman Catholics have already celebrated Palm Sunday, for Orthodox Christians Palm Sunday still lies ahead.

Palm Sunday is a familiar event for many Christians but it is a profound multi-layered event that has much to teach us about our God and Savior Jesus Christ.

In Matthew’s Gospel we read a quote from the prophet Zechariah:

Behold, your King is coming to you, Lowly, and sitting on a donkey, A colt, the foal of a donkey.

Early Christians viewed Jesus’ death and resurrection from the standpoint of Christus Victor (Christ the Conqueror). But all too often we forget or overlook that Jesus Christ is unlike worldly conquerors. 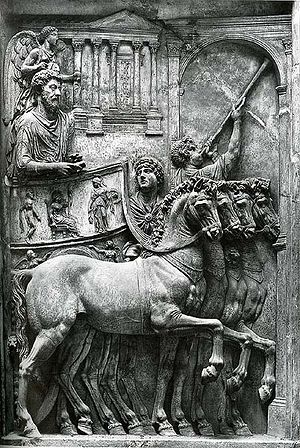 Cyril of Jerusalem in his Catechetical Lectures used Zechariah 9:9 to drive home the point the uniqueness of Christ’s kingship.

Kings are many; of which do you speak, O Prophet? Give us a sign which other Kings have not. If you say, A king clad in purple, the dignity of the apparel has been anticipated. If you say, Guarded by spear-men, and sitting in a golden chariot, this also has been anticipated by others. Give us a sign peculiar to the King whose coming you announce. And the Prophet makes answer and says, Behold! Your King comes unto you, just, and having salvation: He is meek, and riding upon an ass and a young foal, not on a chariot. You have a unique sign of the King who came. Jesus alone of kings sat upon an unyoked foal, entering into Jerusalem with acclamations as a king. (Lecture 12.10)

The Orthodox Matins Service for Palm Sunday has an interesting allegorical interpretation of Jesus riding the foal. 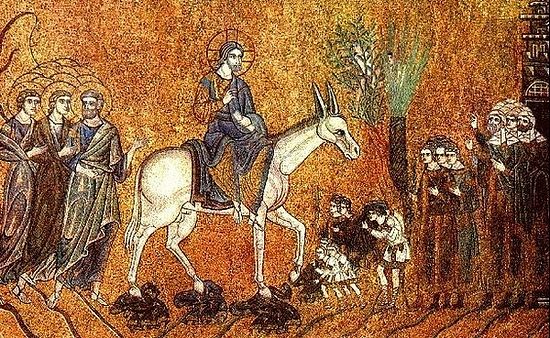 O Thou who ridest on the cherubim and art praised by the seraphim, Thous hast sat, O gracious Lord, like David on a foal, and the children honored Thee with praise fitting for God; but the Jews blasphemed unlawfully against Thee. Thy riding on a foal prefigured how the Gentiles, as yet untamed and uninstructed, were to pass from unbelief to faith. Glory be to Thee, O Christ, who alone art merciful and lovest mankind. (Lenten Triodion p. 492)

Thus, there is in Jesus’ entry into Jerusalem a missionary message — that Christ came to save not only the Jews but also the Gentiles. With Christ’s entry into Jerusalem the Old Covenant of Moses reaches its conclusion and a New Covenant commences. The Old Israel is superseded by the New Israel:

Let us also come today, all the new Israel, the Church of the Gentiles, and let us cry with the Prophet Zechariah; Rejoice greatly, O daughter of Zion; shout aloud, O daughter of Jerusalem; for behold, thy King comes unto thee . . . . (Lenten Triodion p. 489)

In his Catechetical Lectures Cyril also sees Jesus entry into Jerusalem as fulfilling another prophecy in Zechariah 14:4, a favorite verse among Evangelicals who view it in light a literal 7 year Tribulation, the Antichrist, and the Second Coming. (See Calvary Chapel’s founding father Chuck Smith’s dispensationalist commentary.) Cyril of Jerusalem in hisCatechetical Lecture notes:

But He might perchance even sit upon a foal: give us rather a sign, where the King that enters shall stand. And give the sign not far from the city, that it may not be unknown to us: and give us the sign plain before our eyes, that even when in the city we may behold the place. And the Prophet again makes answer, saying: And His feet shall stand in that day upon the Mount of Olives which is before Jerusalem on the east. Does any one standing within the city fail to behold the place? (Lecture 12.11)

Palm Sunday is an invitation to worship Jesus Christ. Just as the Jews and the city of Jerusalem were given the opportunity to receive Christ as King so too the opportunity is given to all today. We find in Canticle One Palm Sunday viewed from the Christus Victor motif:

Out of the mouth of Thy servants, the innocent babes and sucklings, Thou hast received praise. Thou hast overthrown the adversary and by Thy Passion on the Cross Thou hast avenged Adam’s fall of old; with the Tree Thou hast raised him up, and he sings to Thee, O Lord, a hymn of victory. The Lord’s Entry Into Jerusalem
Metropolitan Anthony of Sourozh

The Lord’s Entry Into Jerusalem
Metropolitan Anthony of Sourozh
Nothing embitters a person so much as a lost, a disappointed hope; and that explains why people who could receive Him like that, who witnessed the raising of Lazarus, who saw Christ’s miracles and heard His teaching, admired every word, who were ready to become His disciples as long as He brought victory, broke away from Him, turned their backs on Him and a few days later shouted, “Crucify Him, crucify Him.” Palm Sunday Sermon
But we know that a week later, the same crowd will call for his crucifixion, a dramatic turn around as the one who was proclaimed king and savior, is traded for a thief named Barabas and sentenced to death by crucifixion as a criminal. What happened in this span of less than a week? Homily on Palm Sunday
St. Ignatius (Brianchaninov)
Here is another meaning of the colt of an ass. It is an image of every person who is led by irrational desires, deprived of spiritual freedom, attached to the passions and habits of fleshly life. Christ’s teaching looses the ass from its attachment; that is, from fulfilling its sinful and fleshly will.
Comments
×