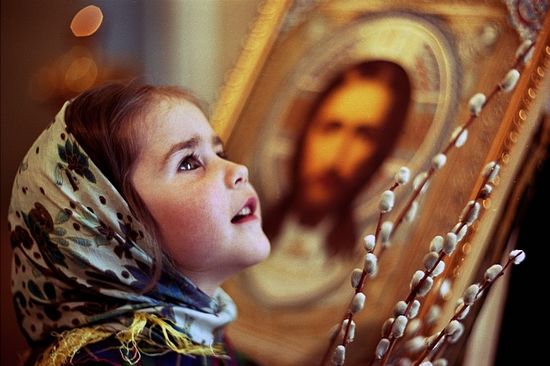 Great Lent has once again come to an end, and once again we are entering Great and Holy Week, following the triumphal feast of Lazarus Saturday and Palm Sunday. Fr. Seraphim Holland from the St. Nicholas Church in McKinney, Texas answers some basic on Holy Week and Palm Sunday.

ANSWER 1. Technically, Holy Week is outside of (after) Great Lent.

QUESTION 2. When does Great Lent end?

ANSWER 2. In general, the weekends are considered to be somewhat outside Great Lent, as the Horologion has rubrics for the Hours which refer to "Great Lent", and these are ignored on Saturday and Sunday. Fasting is relaxed - Orthodox may eat olive oil and drink wine on Saturday and Sunday during the Great Lent "period". The Friday evening before Palm Sunday, when the Vigil for the Raising of St. Lazarus is celebrated actually ends Great Lent, as the first sticheron at Lord I have cried says:

"Having completed the forty days that bring profit to our soul, / we beseech Thee in Thy love for man: /
Grant us also to behold the Holy Week of Thy Passion, / that in it we may glorify Thy mighty acts / and
Thine ineffable dispensation for our sakes, / singing with one mind: // 'O Lord, glory to Thee." (Tone 1)

Holy week is a special time liturgically, and is wholly outside of Great Lent, but of course, fasting and even more rigorous and edifying services continue.

QUESTION 3. Usually, Feasts of the Lord are several days long. The feast is celebrated in some way after the main commemoration. There is one great feast of the Lord that only lasts one day. Which is it? Speculate why.

ANSWER 3. The Entry of the Lord into Jerusalem, one of the "Great Feasts of the Lord", also called "Palm Sunday" only lasts one day, because Holy week, with it's many services in preparation for Pascha, begins the next day.

QUESTION 4. Which TWO separate feasts use the same troparion? Why?

ANSWER 4. The Saturday of Lazarus and Palm Sunday both have the same troparion. These two historical events occurred within less than a week of each other. The troparion shows the link between the two events:

In confirming the common Resurrection, O Christ God, /
Thou didst raise up Lazarus from the dead before Thy Passion. /
Wherefore, we also like the children, /
bearing the symbols of victory, /
cry to Thee, the Vanquisher of death: /
Hosanna in the highest, /
blessed is He that cometh //
in the Name of the Lord.

QUESTION 5. What Gospel(s) is the Raising of Lazarus recounted in? What day is the Feast celebrated? Why? Who were Lazarus' siblings? What happened to St. Lazarus after his resurrection?

ANSWER 5. The story of the Raising of Lazarus is only given by St. John the Theologian. The Feast is celebrated the Saturday before the Entry of the Lord into Jerusalem, because it actually did occur just before Palm Sunday in actual fact, and because the resurrection of Lazarus is a 'type" of the resurrection of Christ (the troparion and many hymns from the feast emphasize this point). Lazarus had two sisters, Mary, and Martha. After the giving of the Holy Spirit at Pentecost, St. Lazarus eventually became bishop of Crete.

QUESTION 6. Why did Christ ride into Jerusalem on the foal of an ass?

ANSWER 6. This was prophesied by the Prophet Zechariah:

Rejoice greatly, O daughter of Zion; shout, O daughter of Jerusalem: behold, thy King cometh unto thee: he is just, and having salvation; lowly, and riding upon an ass, and upon a colt the foal of an ass (Zechariah 9:9).

The Fathers teach that mystically, the ass, being an unclean animal according to Jewish law, represents the Gentiles. Jesus led the Gentiles into "Jerusalem" as well as the Jews, and this was made apparent after Pentecost.

QUESTION 7. It is traditional for the faithful to hold Palms during the Palm Sunday liturgy. when are these palms given out? What other plant is popularly used, especially by Russians? In the historical Palm Sunday, how were the palms used?

ANSWER 7. The palms, and possibly pussy willow branches, which Russians especially favor, are blessed in the matins service at the vigil for Palm Sunday on Saturday night. They are given out to each person after the Gospel is venerated, which is read in about the middle of matins. The scriptures tell us that when Christ entered Jerusalem, the people saluted Him:

On the next day much people that were come to the feast, when they heard that Jesus was coming to Jerusalem, Took branches of palm trees, and went forth to meet him, and cried, Hosanna: Blessed is the King of Israel that cometh in the name of the Lord (John 12:12-13).

QUESTION 8. Why did so many people greet Jesus when He entered Jerusalem?

ANSWER 8. The Gospel reading for the matins states:

And when he was come into Jerusalem, all the city was moved, saying, Who is this? And the multitude said, This is Jesus the prophet of Nazareth of Galilee (Matthew 21:10-11).

Some of the same people who would later yell "Crucify Him!", and "His blood be on us, and on our children" wanted to see Him, because of His notoriety. It is clear from St. John's retelling that the entire area knew about the raising of Lazarus:

Much people of the Jews therefore knew that he was there: and they came not for Jesus' sake only, but that they might see Lazarus also, whom he had raised from the dead. But the chief priests consulted that they might put Lazarus also to death; Because that by reason of him many of the Jews went away, and believed on Jesus. On the next day much people that were come to the feast, when they heard that Jesus was coming to Jerusalem ... (John 12:9-12).

QUESTION 9. What, in general, is the Typicon for the celebration of Palm Sunday? Which service books are used for the vespers, matins and Divine liturgy. Try to be comprehensive.

ANSWER 9. The Typicon calls for a vigil service with the blessing of the five loaves (Litya) on the Eve of the Feast, Saturday night. All Great Feasts of the Lord and the Theotokos, with the exception of the Annunciation, and Pascha, are celebrated this way.

The “Vigil” service is vespers and matins, celebrated in the "vigil format", and the first hour. The Divine Liturgy of St. John Chrysostom is celebrated on Sunday morning, after the third and sixth hours.

As in all Great Feasts of the Lord, none of the hymns that would be normally sung from the Octoechos to commemorate the resurrection are sung, and the Magnificat is omitted, with the entire 9th Ode of the Canon being sung instead.

The Lenten Triodion is used for all the variable parts of the service, such as the stichera at "Lord I have cried", the aposticha, the troparion and kontakion, etc. It also contains the prayer for the blessing of the palms.

As in all the services of the church that are part of the "daily cycle" (in this case, vespers, matins and divine liturgy), the "Horologion" provides the "common" parts and the main service framework.

The Psalter is read at Vespers and Matins.

The Old Testament is read at Vespers, the Gospel at matins and Divine Liturgy, and the Apostolos (book of the epistles) at divine Liturgy.

After the Divine Liturgy, a procession is made outside.

QUESTION 10. What rules about food does everyone remember for Palm Sunday?

ANSWER 10. On Palm Sunday, fish may be eaten, which otherwise is not eaten during Great Lent, except on the Annunciation. Nobody ever forgets this! Holy Week: An Explanation
Great Lent and Holy Week are two separate fasts, and two separate celebrations. Great Lent ends on Friday of the fifth week (the day before Lazarus Saturday). Holy Week begins immediately thereafter. Let's explore the meaning of each of the solemn days of Passion Week. Lazarus Saturday and Palm Sunday
The main troparion of Palm Sunday is the same one sung on Lazarus Saturday. It is sung at all of the services, and is used at the Divine Liturgy as the third antiphon which follows the other special psalm verses which are sung as the liturgical antiphons in the place of those normally used. Jesus' Entry into Jerusalem - Palm Sunday
The meek and humble entry of Our Lord Jesus Christ in to Jerusalem was a symbol of peace and humility, for it represented a complete contrast to the triumphal processions of kings at that time.
Comments
×