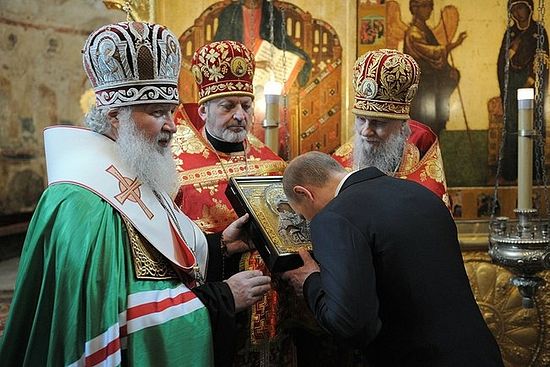 In today’s upside down world, Russia, which for seventy years had aggressively exported atheist materialism, both overtly and covertly, is becoming the defender of the principles that used to be the badge of the Christian West, while a composite swathe of authorities in the West are now openly promoting the disintegration of the family, the sexualization of children from the tenderest of ages, the creeping promotion of euthanasia, the limits to freedom of conscience, to the point of including even the regulation of speech.

In June of last year, for the twentieth anniversary of the International Year of the Family, the U.N.Council on Human Rights issued a resolution in defense of the family with such uncontroversial statements as “it is the responsibility of the family to raise and protect children” who “must grow in a family environment made up of happiness, love and understanding”. Resolutions of this nature are not normally expected to raise eyebrows, yet only 26 out of the 47 nations that sit on the Council voted in favour of it. Who would vote against protecting the family and its role in society? Well, for example, all of the countries representing the once Christian West: the U.S., Britain, France, Germany, Austria, Ireland and Italy. Their “No” vote signalled their insistence on expanding the word “family” to include “and other types of union” or “regardless of their structure” (a parlance Secretary General Ban Ki-moon seems intent on mainstreaming into use).

The battle, to be sure, rages on both sides of the world, but while the upholders of natural law and traditional values in the West increasingly find themselves outnumbered by the people in the Courts or in Government, usually elected for reasons other than to overturn the ethical thinking that is native to humanity itself, in the East those who would rebel against the ethical reversal that is being urged on the people often find support, in words and visibility, in their elected authorities.

The most unexpected example comes from Russia, once the quintessential source and financer of covert operations to inundate the free world with Marxist atheist propaganda. Nobel Laureate Mikhail Gorbachev, who raised great expectations when he revealed to the world that he had been baptized, is actually more of a pantheist with New Age leanings. But today’s Russian President, Vladimir Putin, has repeatedly spoken up in defense of common assumptions which the West is no longer able to take for granted, in the name of what many in Russia are starting to consider their country’s God-given mission to lead Europe back to its Christian roots. It is well-known that Putin’s background is that of a former KGB (and FSB) agent, and the allegations against him with respect to political assassinations such as the death of Anna Politkvskaia or Aleksandr Litvinenko have never been laid to rest. Nevertheless, whether he be motivated by cynical expediency or an actual bonafide change of heart, his opposition to the culture of relativist and materialist secularism is a bulwark that the secularists can not simply wish away. Putin’s defense of the family cost Russia the Western leaders’ boycott of the Winter Olympic games in Sochi in February 2014, and among his most controversial acts are: the banning of all pro-abortion ads, forbidding the subjecting of minors to gay propaganda or to statements that condone “nontraditional” relationships, the prohibiting of the adoption of Russian-born children to couples or single persons living in countries where same-sex marriage is allowed, down to lesser politically incorrect stances such as criticizing other countries for even thinking about legalizing marijuana. On the occasion of the 1,025th anniversary of the conversion of the Russian people to Christianity, Putin stated that “If Russia has become a world power, we owe it not to a czar, a war or a political party: we owe it to Christianity.” Conversely, at a meeting at the Valdai Foundation last year, when Russia was still a respected member of the G8 superpower consortium, he assessed the West’s “moral bankruptcy”, pointing to, among other things:

“the excesses of political correctness have reached the point where people are seriously talking about registering political parties whose aim is to promote pedophilia. People in many European countries are embarrassed or afraid to talk about their religious affiliations. Holidays are abolished or even called something different; their essence is hidden away, as is their moral foundation. And people are aggressively trying to export this model all over the world. I am convinced that this opens a direct path to degradation and primitivism, resulting in a profound demographic and moral crisis.”

This willingness to call a spade a spade from a stage visible to the entire world, while the leaders of the West most willing to put up a fight are currently outflanked, has drawn new attention to President Putin. It also suggests that Nato’s trade sanctions on Russia, together with the unprecedented moral, financial and strategic support it suddenly started allotting to Ukraine, may actually owe more to the same ethical reasons that had cost Russia the Sochi boycott a month before – Putin’s stand on the issue of of gay rights – than to Western concern for keeping the Ukranian territory intact (also considering the fact that the EU has always consistently rejected Ukraine’s repeated and longstanding pleas for admission).

Russia’s policies are also echoed in those of its neighbouring countries. Belarus, which inherited abortion and a 50 percent divorce rate from Soviet times, has adopted pro-family policies such as shouldering 25 percent of the rent due by families with three children, and handing out apartments entirely for free to families where the children are four. Even in the Donbass area of Eastern Ukraine, where the war of secession is going on, the issues at stake go beyond the economy or the patriotic sense of belonging of the ethnic Russian population, to openly include the concern at the EU’s relentless drive to impose a secularist ethic on member countries. The prospective Constitution drawn up for their hoped for new republic of Donetsk contains the following stark provisions: article 31.3 prohibits any and all forms of “perverse” unions between people of the same sex, article 9.2 declares the Orthodox faith professed by the Russian Orthodox Church to be the religion of State, Article 6.5 declares that all political authorities are to respect the traditional religious, social and cultural values of the “Russian world”, while articles 3 and 12.2 ensure the right to life from the moment of conception, i.e.forbid abortion.

The message came loud and clear in the words of separatist rebel leader Aleksandr Matyushin, leader of the anti-EU rebellion in the Donbass area, who stated at a public rally that:

“in Europe they have sodomy, they have same-sex marriage, they have a fully degraded society. On the Continent the most widely used name for new born babies is Mohammed. Europeans are too worried about human rights and are always afraid of offending someone. In France the immigrants are getting more and more arrogant. This is what is going to happen here too. Europe will be our undoing; we risk being invaded by Islam, which is already spreading out in Crimea. I am in favor of Russian nationalism, for the love of my people”

How Russia could have rediscovered its Christian roots so far as to become a rallying point for upholders of Christian morals, and the EU governing bodies the symbol of the exact opposite, can only be explained by taking a sober look at the events that followed the demolition in 1989 of that quintessential symbol of tyranny, the Berlin Wall.

As soon as freedom was at hand, all of the ex-Warsaw pact countries were eager to clamber onto the EU ship, viewing admittance to the roster of EU member states as a guarantee against ever being sucked back into the Russian fold. But in 1992, the Maastricht Treaty morphed the European Common Market into the EuropeanUnion, whose structure, outlook and coercive attitudes look a lot like those of the defunct Soviet Union. As people on both sides of the continent are coming to realize, Maastricht effectively closed the gap once symbolically marked by the Berlin Wall, joining the worst of the West, its hedonistic materialism, to the dialectical materialism still entrenched in the intentions of the ex-totalitarian regimes. Thus the Eastern countries find themselves wedged between two versions of what increasingly appears to be much the same thing (which goes to explain the Hamlet-like uncertainty of ex-Ukranian Premier Yanukovich between the enticements from both East and West that contributed to initiating the current confrontation). Russia’s ‘Orthodox Jihad’
A caution to readers: don’t mistake my posting all this as an endorsement of Putin. I genuinely don’t know enough about the complexities of Russian politics to make an informed call. I’m just presenting this for the sake of discussion. Vladimir Putin says he would never be able to live outside of Russia
“The fact that Russia is my whole life is absolutely obvious. Not for a moment could I imagine myself outside of Russia." ChiRho11/18/2015 9:44 pm
Excellent, excellent post Pravoslavie! THIS is what so many Westerners are ignorant of. This is what the Mainstream Media won't tell.
If only more Christians knew these things. The Media in the West has become like the Soviet propaganda machines. It is almost as if Russia and the Western countries have switched places from last century.
I hope the Easterners realize that there are still many Westerners who are not represented by what their governments are doing, and I hope that more Westerners wake up to the things pointed out in this article.
Glory to Russia.

tonyr omabarian4/29/2015 3:34 am
It is possible for someone to be correct in one regard (moral values) and wrong in another regard (dishonoring Russia's signature on the Budapest Memorandum).
×