During World War II many people in the Soviet Union turned to Christ. 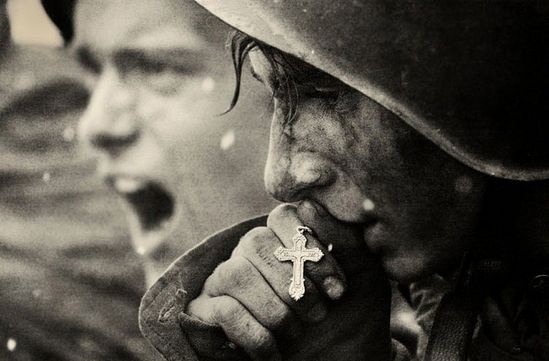 “The Smolensk region’s archival documents to some degree refute the preconceived idea that in the war period it was mostly people of the older generation and particularly villagers who were drawn to the Church. In fact there is data confirming that very many young people then attended churches and participated in sacraments and rites,” said executive secretary of the Executive Office of the Moscow Patriarchate Hieromonk Seraphim (Amelchenkov) on Monday at the international conference in the Russian Academy of Sciences, reports Interfax-Religion.

According to him, the need for the Church and for a spiritual guidance was immense at that time.

“This is indicated by numerous appeals by Soviet citizens to the authorities with requests to opening the churches. This phenomenon demonstrates the national trend,” said the priest.

He also recalled that the Soviet government used all available resources toward victory, including a temporary correction in the Bolshevist policy towards the Church.

“Use of the religious factor for implementing the state’s plans on the liberated territory was very significant. The Church’s efforts to solve the problems of shelter for orphans, care for the wounded, and food collection enabled the state to concentrate its efforts on important military tasks,” the representative of the Patriarchate noted.

Concurrently, the Church was given a unique opportunity through the expansion of patriotic activity to restore its structure and strengthen its position in society, he stated.

However, he said, as the party-state system grew stronger and victory grew near, suppression and persecution of the Church resumed. Three-Fourths of Russian Residents Believe that Russia Needs Orthodoxy
The Sreda Sociological Service provides information on the opinion of Russian citizens about the necessity of Orthodoxy for the country:
Comments

Sally Iloff5/2/2016 9:23 pm
God called for test and it was. But after that a testimony came - soldiers turned to Christ the lord and served Him, not communists. Blessed be the name of the Lord!
×