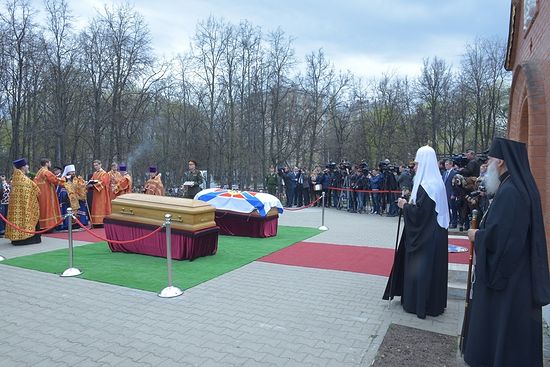 On April 30, 2015, His Holiness Patriarch Kirill of Moscow and All Russia participated in the ceremony of the reburial of Grand Duke Nikolai Nikolaevich the younger, and his wife, Grand Duchess Anastasia Nikolaevna. Having died in exile and first buried at Archangel Michael Church in Cannes, France, they are now being reinterred in Moscow at the Bratsky Military Cemetery in Sokoly. Participating in the ceremony was Mr Sergey Naryshkin, Chairman of the State Duma of the Russian Federation; Mayor Sergey Sobyanin of Moscow; His Eminence Metropolitan Ilarion of Volokolamsk, President of the Department of External Church Relations of the Moscow Patriarchate; His Eminence Archbishop Michael of Geneva and Western Europe; General Pankov, Deputy Minister of Defense of the Russian Federation; Duke Dimitri Romanovich, Chairman of the Union of the Romanov Family; representatives of the Moscow government and academia.

Mr Naryshkin noted that Grand Duke Nikolai Nikolaevich and his wife have now returned to the Fatherland, their names obtaining a worthy place in the memory of Russian society. “The achievements of the Grand Duke as a military and state leader, as the Commander-in-Chief of the Army and Navy of the Russian Empire, are difficult to fully evaluate. He was described by General Brusilov simply: ‘The entire Russian Army had trust in Nikolai Nikolaevich.’

“During the First World War the name of the Grand Duke became a symbolic for Russian soldiers and generals, for our compatiots, for Russian society and for all those who connected the victories of Russia with their own national emancipation, and after the revolution, for those who found themselves abroad. The final years of the life of Nikolai Nikolayevich were spent in France, which is also symbolic. The French knew and understood well that the endurance and bravery of Russian soldiers on the Eastern Front prevented the enemy from reaching Paris.

“We remember this today: only 3 days ago in Paris a ceremony farewell with the remains of the Grand Duke took place in Paris with military honors and in accordance with Orthodox tradition. He had done a great deal for military fraternity between Russia and France. Our alliance strengthened later, during World War II, in our struggle against an even more serious enemy, we will now begin to celebrate the 70th anniversary of victory in that war.

“On behalf of the leadership of the Russian Federation, on behalf of the citizens of Russia, I would like to express profound gratitude to the federal and municipal authorities of the French Republic for their cooperation in returning the remains of the Grand Duke and his wife to their homeland.” 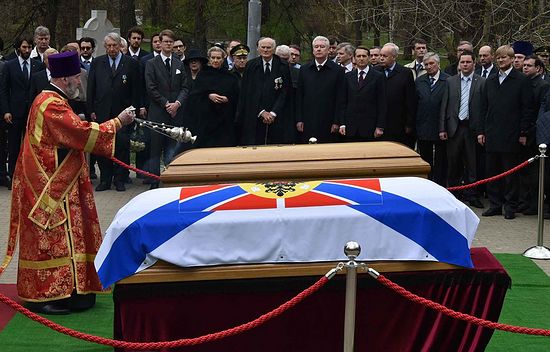 Naryshkin emphasized that Nikolai Nikolayevich and his wife were not able to return to Russia during their lifetimes, but the Grand Duke’s finals wish, preserved in family tradition, was that his final resting place be in his homeland, in his beloved great land of Russia, beside his soldiers. And today the will of Grand Duke Nikolai Nikolayevich is fulfilled, he said.
Mayor Sobyanin also spoke, stating that today's events are important for Moscow and for Muscovites. “Today the Commander-in-Chief of the Russian Army during World War I returns to his soldiers… may his remains lie in peace.”

Addressing the participants of the ceremony, His Holiness Patriarch Kyrill said “We are present at a symbolic act--a once fractured country and people have found the strength to come together, to overcome historic differences and to unite in earnest. The reestablishment of canonical unity within the Local Russian Orthodox Church bears witness to this.

“The desire of those eminent sons and daughters of Russia who lived outside of the borders of their homeland, is being fulfilled. We are witnessing today the re-interment of the remains of the Commander-in-Chief of the Russian Forces of World War I, Grand Duke Nikolai Nikolaevich and his wife. It is remarkable that this is taking place on the 70th anniversary of the victory over fascist Germany, and what happened between 1941 and 1945 is connected directly to the events of World War I. For this was a unified tragedy of the 20th century which saw no equal in the history of mankind, governments fell apart, peoples were rent asunder, tens of millions were killed. What we do now, today, is in part a symbolic act of overcoming the chaos, the division which our people suffered last century.

“Let us pray for the repose of the departed souls the servants of God, the bodies of whom now lie here, on the sacred land of this military cemetery, where the remains of soldiers and officers who defended our homeland during World War I also lie. Eternal memory to them!”

Metropolitan Hilarion, Protopriest Nikolai Balashov, Deputy President of the DECR and Protopriest Vasily Baburin, Rector of the Church of All Saints in Vsekhsvyatsky performed a funerary litany for the couple, as the Moscow Synodal choir sang.

Saluting soldiers the fired 3 rounds in memory of the Russian Commander-in-Chief. The remains of the Grand Duke and his wife were then lain to rest in their new graves. Sts. Martha and Mary Convent in Moscow to Celebrate the Feast-Day of its Foundress
July 18 is the feast-day of the Holy New Martyrs Grand Duchess Elizabeth (Romanova) and Nun Barbara (Yakovleva). On this day everybody is welcome to take part in the festive events, dedicated to commemoration of the Holy Grand Duchess, which will take place at the SS. Martha and Mary Convent of Mercy in Moscow. The Holy Royal Martyrs in the Light of History and God’s Providence
His knowledge of his fate was truly prophetic. “I have more than a presentiment, – he used to say, – that I am doomed to terrible trials, and that I will not be rewarded for them in this world.” Beginning with Russia’s defeat in the Russo-Japanese war, which was followed by the revolution of 1905-1907, which diminished the Tsar's power and freed the forces of anarchy and outright evil, the foundations of Russian sovereignty tottered more and more.
Comments
×