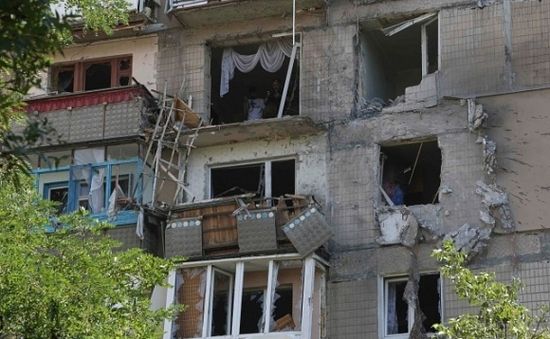 With the blessing of His Holiness Patriarch Kirill staff members of the Synodal Department for Church Charity and Social Ministry for the fifth and sixth times visited the dioceses situated in the Southeast Ukraine, reports the Department’s press service.

On invitation from Metropolitan Hilarion of Donetsk and Mariupol as well as Metropolitan Metrophanes of Lugansk (Luhansk) and Alchevsk the Department’s staff workers visited in April the Donetsk and Lugansk Dioceses. Food was purchased with the church funds: buckwheat, rice, pasta, canned stewed meat, canned fish, condensed milk, tea, sugar, vegetable oil, and milk baby formulas for newly-born children and infants up to one year. Residents of the Donetsk and Horlivka Dioceses were given 41.5 tons of food. An additional 37 tons of food were handed over to the Lugansk and Severodonetsk Dioceses. The Shakhty Diocese’s social department was responsible for purchase of food, shipment, loading and unloading.

Staff members of the Department for Church Charity stayed in the Donetsk Diocese from April 14 to 17. On the church funds the Shakhty Diocese’s social department purchased food to the total sum of 3,781,693 rubles (72,782 USD).

On the territory of the Horlivka Diocese the aid will be received by parishes in Horlivka, Uglegorsk and Debaltseve. Free dining-rooms are arranged at these parishes where 4,000 people will be given hot meals daily. Around 2,500 civilian residents will receive food parcels.

On April 16, dean of the Yasynuvata district of the Donetsk Diocese Archpriest Vitaly Bakun familiarized the Church Charity Department representatives with the work of church social refectories.

The Department workers stayed in the Lugansk Diocese from April 21 to 25. For residents of the Lugansk and Severodonetsk Dioceses a consignment of food weighing 37 tons on the sum of 2 million 736 thousand 228 rubles was formed.

On April 22 the humanitarian aid was delivered to Lugansk, on the territory of the storeroom of the newly-established diocesan humanitarian department. On April 23-24 around 20 tons of aid were distributed from the storeroom to parishes of the Lugansk and Severodonetsk Dioceses where free refectories were organized. Thus, batches of food were received by parishes of Lugansk, Aleksandrovsk, Alchevsk, Perevalsk as well as villages of Yubileiniy, Stakhanov, Bryanka, Pervomaysk and Malaya Vergunka. Owing to this aid around 7,000 people will be provided with hot meal daily for the next month.

More 17 tons of food will be used for arranging of 2,500 individual food parcels, which will be distributed among the most needy residents of the Lugansk Diocese.

This is already the sixth working visit of the Church Charity Department’s staff members to the Southeastern Ukraine. In total 169.5 tons of humanitarian aid have been handed over to the Donbass civilians by the Department for Church Charity since late December 2014. Over 30,000 people have been provided with foodstuffs, including baby food, as well as free hot dinners in church social dining-rooms.

You can donate funds in support of the Ukrainian civilians on the official website of the Synodal Department for Church Charity and Social Ministry.

By April 24, 128 million 81 thousand rubles to help the Ukrainian civilians were donated to the account of the Church Charity Department. Of them 75 million 819 thousand rubles have been expended. Reports on raising and expenditure of funds are published on the Department’s website. Over 3,000 Lugansk residents receive humanitarian aid
3,500 food hampers were purchased with Church funds and handed over to the needy. The total weight of the humanitarian aid was 16 tons.