Israel returns an ancient church to the Orthodox Patriarchate of Jerusalem

Despite all the bureaucratic impediments arranged by the executive authority of the state of Israel, the process of return of the Church property in the Holy Land has recommenced, reports the Linga portal with the reference to the press service of the Orthodox Patriarchate of Jerusalem. 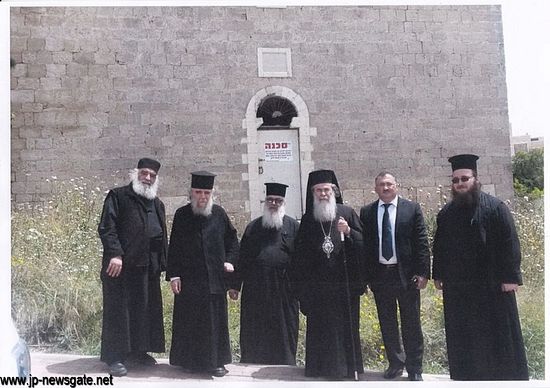 Ahead of the feast-day of Greatmartyr George the Victory-Bearer (May 6) the Israeli authorities returned the church that once had been built in honor of the Greatmartyr of Lydda to the Orthodox Church.

The ancient temple located on the territory of the Shlomi village which had been built on the ruins of the small Palestinian town of Basia was closed following the expulsion of Arabs from there in 1948.

On Monday, April 27 this year, Patriarch Theophilos III of Jerusalem in the presence of the Patriarchate’s secretary Metropolitan Aristarchos and local clergy signed an agreement on transfer of the church into possession of the Orthodox Church of Jerusalem. Local authorities were represented by head of the Shlomi administration Jubi Neiman. In accordance with the laws developed by the Israeli Antiquities Authority, the clergy and the flock will be able to embark on reviving the liturgical life of the St. George’s parish already in the near future. In its turn, the village’s executive authority pledges to give the faithful protection against attacks of various extremists.

Also the Patriarchate’s legal consultant Munir Kamal has discussed with chief of the local developer company the terms of restoration of the church building which has not been renovated for nearly 70 years. It is stressed that specialists will start carrying out such work at the end of May. Sixth century Byzantine church unearthed In Acre, Israel
Discovery of public structure in north Israel city is a breakthrough. For the first time a Christian structure has been unearthed in Acre, a city said to have been highly influential in early years of Christianity.
Comments