The last and oldest cleric of the Chinese Autonomous Orthodox Church, Priest Michael Wang Quansheng, has reposed in the Lord, report the sources from his close circle. He served as a priest for more than fifty years. 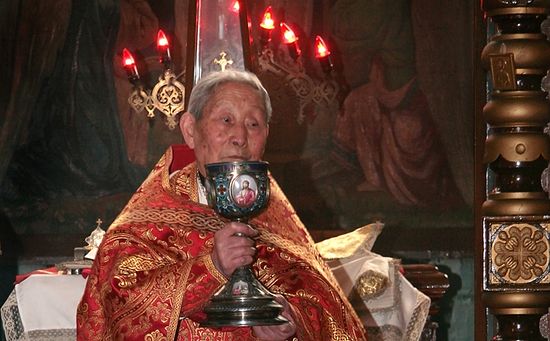 Michael Wang Quansheng was born in about 1925 (the exact date is unknown), reports Rublev.com.

In 1958 he was ordained a priest by Bishop Simeon (Du) of Shanghai – the first native Chinese Orthodox hierarch and afterwards the last bishop of the Chinese Autonomous Orthodox Church.

After the repose of Bishop Basil (Shuan) of Beijing (d. 1962) and then Bishop Simeon (Du) of Shanghai (d. 1965) the Chinese Autonomous Orthodox Church was deprived of arch pastoral leadership. The persecutions that followed during “the Great Proletarian Cultural Revolution” made full-fledged Church life impossible.

Easing of restrictions on Orthodox Christianity by the Chinese authorities began in the 1980s.

In 2008, on the feast of Pentecost, Priest Michael Wang with the authorities’ permission for the first time participated at the service at the consulate general of Russia.

In August 2009 in Labdarin (in the Inner Mongolian Autonomous Region of northern China) the senior Orthodox Chinese cleric consecrated the Church of Holy Hierarch Innocent of Irkutsk (built in 1990). It is one of only four churches that have an official status in the People’s Republic of China. The iconostasis, the necessary vessels and the liturgical vestments were donated to the church by the diocese of Chita and Zabaikalsk which is in charge of this parish (according to decision of the Russian Church’s Holy Synod).

In May 2013, Fr. Michael Wang concelebrated with His Holiness Patriarch Kirill during the first visit of primate of the Russian Orthodox Church to China. The Divine Liturgy on that day was celebrated in Shanghai, at the Cathedral of the “Intercessor for Sinners” icon of the Most Holy Theotokos. 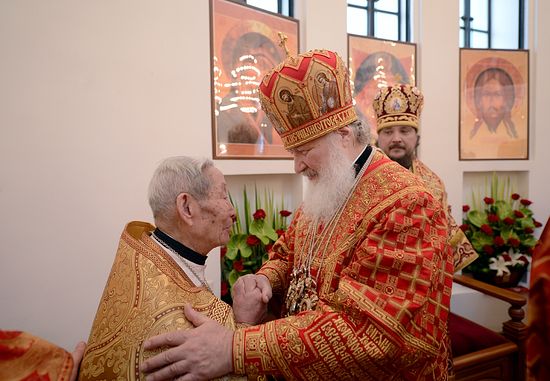 The cleric spent the final years of his life in Shanghai. By the 2010s he became the oldest clergyman and the only priest of the Chinese Orthodox Church—a Chinese by origin.

There are currently around 15,000 Orthodox Christian believers living in China. Most of them reside in Beijing, Shanghai, Heilongjiang province, and the Xinjang and Inner Mongolia autonomous regions. Some clerics of the Moscow Patriarchate serve in the country. They carry out their ministry in the parishes of Beijing, Shanghai and Guangzhou. Hong Kong has Russian and as Chinese clergy.

May Almighty God rest the soul of His newly departed priest, Fr. Michael Wang, and grant him Eternal memory! The Astonishing Popularity of Christian Faith in Today's China
Martin Conway
For those of us privileged to have some firsthand awareness of the situation and struggles of Christians in today’s People’s Republic of China, the way Christian faith has won the hearts of millions of people in a land so often considered by earlier missionary strategists to be one of the most difficult in the world, is nothing less than a revelation of the power and truth of God’s Holy Spirit.
Comments