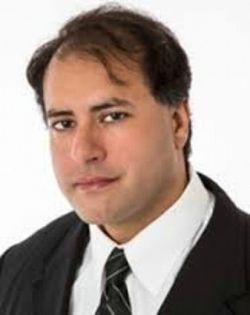 Raymond Ibrahim is author of Crucified Again: Exposing Islam’s New War on Christians.
Earlier this week a news report unwittingly demonstrated how Turkey—once deemed the most "secularized" Muslim nation—is returning to its Islamic heritage, complete with animosity for the infidel West and dreams of the glory days of jihadi conquests:

A group of devout Muslims from across Turkey prayed before the city's historic Hagia Sophia on the 562nd anniversary of the Turkish conquest of Istanbul [Constantinople], demanding that the site be turned back into a mosque.

Men and women from across the country gathered before the Hagia Sophia museum early May 31, as part of an event organized by the Anatolian Youth Association (AGD) with the motto "Break the chains, Open Hagia Sophia," and prayed the morning prayer with a call for the reconversion of the museum into a mosque.

In fact, this is an annual ritual. Thousands of Turks surround Hagia Sophia every May and call for it to become a mosque—often to Islam's war-cry, "Allahu Akbar!"

This is not about a "minority of radicals." In a survey conducted with 401 Turks, more than 97 percent wanted Hagia Sophia to be turned into a functioning mosque. Nor is this about Muslims needing a place to pray. As of 2010, there were 3,000 active mosques in Istanbul alone.

Rather, this is about Muslims wanting to revel in the glory days of Islamic jihad and conquest.

Unlike historically-challenged Westerners, Muslims fully understand the significance of Hagia Sophia. Hagia Sophia—Greek for "Holy Wisdom"—was, in fact, Christendom's greatest cathedral for almost one thousand years. Built in Constantinople, the heart of the ancient Christian empire, it was also a stalwart symbol of defiance against an ever encroaching Islam from the east.

After parrying centuries of jihadi thrusts, Constantinople was finally sacked by the Turks under Sultan Mehmet II on May 29, 1453. Its crosses desecrated and icons defaced, Hagia Sophia—as well as thousands of other churches—was converted into a victory mosque, the tall minarets of Islam surrounding it in triumph.

Reading the primary historic texts from the period is not unlike reading current headlines concerning Islamic State atrocities—the massacres, beheadings, rapes, enslavement of Christian "infidels" and the defilement of their churches. Writes an eyewitness to the 1453 Turkish conquest of Constantinople:

The enraged Turkish soldiers . . . gave no quarter. When they had massacred and there was no longer any resistance, they were intent on pillage and roamed through the town stealing, disrobing, pillaging, killing, raping, taking captive men, women, children, old men, young men, monks, priests, people of all sorts and conditions… There were virgins who awoke from troubled sleep to find those brigands standing over them with bloody hands and faces full of abject fury… [The Turkish jihadis] dragged them, tore them, forced them, dishonored them, raped them at the cross-roads and made them submit to the most terrible outrages…

Tender children were brutally snatched from their mothers' breasts and girls were pitilessly given up to strange and horrible unions, and a thousand other terrible things happened. . .

Temples [including Hagia Sophia] were desecrated, ransacked and pillaged . . . sacred objects were scornfully flung aside, the holy icons and the holy vessels were desecrated…. Immense numbers of sacred and profane books were flung on the fire or torn up and trampled under foot.

This is what Turkey's Muslims are proud of. Salih Turhan, head of the Anatolian Youth Association, the group that annually organizes mass demonstrations around Hagia Sophia, boasts that, "As the grandchildren of Mehmet the Conqueror, seeking the re-opening Hagia Sophia as a mosque is our legitimate right."

Turks know full well that Mehmet was the scourge of European Christendom; that his hordes seized and ravished Constantinople, forcibly turning it into Islamic Istanbul; that he had the fallen corpse of the Christian emperor, Constantine, who refused to forsake his besieged city, beheaded, mutilated, and mocked. Openly idolizing Mehmet and other sultans, as many Turks do, is tantamount to their saying, "We are proud of our ancestors who slaughtered, beheaded, enslaved and raped people and stole their lands simply because they were Christian 'infidels.'"

More contemporarily, it's tantamount to their saying "We are proud of our fellow Sunni Muslims of the Islamic State—who are currently slaughtering, beheading, enslaving, and raping people simply because they are Christian "infidels."

Such pride in Islamic atrocities goes all the way to the top in Turkey, to President Erdogan, who claims that the jihadi conquest of Constantinople was the true "time of enlightenment."

Still, none of this stops Turks from claiming victim status. The Anatolian Youth Association still manages to blame the West: "Keeping Hagia Sophia Mosque closed is an insult to our mostly Muslim population of 75 million. It symbolizes our ill-treatment by the West."

So keeping a historically Christian/Western building—that was stolen by bloody jihad—as a museum is seen as "ill-treatment by the West."

Similarly, last April, after Pope Francis accurately referred to the mass slaughter of Armenians by Ottoman Turks as "the first genocide of the 20th century," Ankara's highest Islamic authority responded by saying that the Pope's remarks "will only accelerate the process for Hagia Sophia to be re-opened for [Muslim] worship."

Such is the Islamic world's double standards: when Muslims conquer non-Muslim territories, such as Constantinople and its churches—through fire and steel, with all the attendant human suffering and misery—the descendants of those conquered are not to expect any apologies or concessions—not even a building.

However, once the same Muslims who would never concede an inch of Islam's conquests are on the short end of the stick—Palestinians vis-à-vis Israel, for example—then they resort to the United Nations and the court of public opinion, demanding "justice," "restitution," "human rights," and so forth.

It's a testimony to the blindness and historic ignorance of the West that more people are not onto this old Muslim game yet.

Raymond Ibrahim, a Middle East and Islam specialist, is author of Crucified Again: Exposing Islam's New War on Christians (2013) and The Al Qaeda Reader (2007). Ibrahim's dual-background—born and raised in the U.S. by Coptic Egyptian parents born and raised in the Middle East—has provided him with unique advantages, from equal fluency in English and Arabic, to an equal understanding of the Western and Middle Eastern mindsets, positioning him to explain the latter to the former and making him a much sought after expert. OrthodoxCrusader8/3/2018 6:52 am
The orthodox army is marching and our holy war will reclaim our beloved church the agia sophia and our property. The head of the snake islam and its ordogan that boasts about their past savgery will fall beneath our feet. WE ARE COMING AND THE POWER OF OUR LORD JESUS CHRIST AND THE SAINTS AND THE ANGELS AND THE MARTYRS WILL BE WITH US. WHO EVER DENIES THE SON IS A LIAR!!! EVERY TONGUE SHALL CONFESS THAT JESUS IS LORD EVEN ORDOGAN.

Maria4/11/2016 12:42 pm
Christians, and others, were murdered, raped, and enslaved since the earliest days of Islam, following the direct teachings and practices of Mohammed. These violent practices can be observed in 1400 years of history.

No valuable dialogue can occur with a 'moderate' or 'peaceful' Muslim while that individual believes its faith is inherently nonviolent. The true radicals of Islam are those that preach and practice tolerance in the face of what Mohammed taught.

If reformation is to occur in Islam, moderates must forsake the false notion that Islam is not inherently violent at its core.

Lord Jesus Christ, Son of God, have mercy on us and save us.

Erdogan brings US Muslims home to new mosque
Monday, April 4, 2016
By Shahzad Abdul, AFP
LANHAM, Maryland ­­ Beneath a majestic
Ottoman dome, waving Turkish flags outside
their brand new mosque, a group of U.S.
Muslims — the faithful and the curious —
jostled Saturday to welcome a president.
Hailing the beauty of its location near the capital
Washington, Turkish President Recep Tayyip
Erdogan officially inaugurated the Diyanet
Center of America.
Ankara's leader, whose country bankrolled the
massive project at a cost of US$110 million, said its presence in the small town of Lanham
— and during a U.S. election year that has seen Donald Trump call for a ban on Muslims
entering the country — made sense.
“Unfortunately, we are going through a rough time all around the world. Intolerance toward
Muslims is on the rise not only here in the United States but also around the globe,” said

Bonhomme Richard4/8/2016 12:19 am
The Turks have remained a nation of genocide and hatred towards Christians. They should not be part of NATO and their behavior is no different from when the first Islamic armies brought terror and slavery from Spain to India. Their behavior along with the of ISIS is ripped right from the pages of the Koran. No Greek, Armenian or Eastern European Christian will ever forget their Muslim savagery.

Ibrahim4/7/2016 4:12 pm
Daesh is the truest form of Islam. And all the so-called "peaceful" muslims' silence rings as full assent.

Nam126311/29/2015 2:40 am
Turkey and Islamic state DO NOT represent true Islam.It's as simple as that. I'm a muslim.Whatever they did and continue to do contradicts the Qur'an.