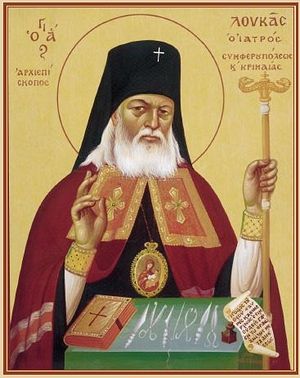 Saint Luke the Physician, Archbishop of Simferopol, was born in 1877 in the Kerch Peninsula of Crimea. He married Anna Vasilievna, who reposed at the age of 38, so the Saint took the full responsibility of raising his four children. In 1920 he was elected Professor of Topographic Anatomy and Surgery at the University of Tashkent. His research on the issue of purulent infections were innovative and he wrote the manual still used today. He was ordained a Priest in 1921, Bishop of Tashkent in 1923, and in 1946 he was promoted to Archbishop of Simferopol in Crimea. He remained in this position until his repose, on 11 June 1961. From 1922 till the end of his earthly life he suffered arrests, exiles and horrific tortures. Many times they attempted to kill him, but God protected him. Throughout the last nine years of his life he was blind from glaucoma, but in this also he showed Job-like patience.

His life and conduct gives us the opportunity to highlight the following:

First, studying the life and conduct of Saint Luke, Archbishop of Simferopol, one cannot distinguish the Bishop from the physician. Saint Luke was both together everywhere. He would heal patients with the use of medical science, but also through prayer. Also, his pastoral ministry included him being a physician, since he tried to heal people both physically and spiritually. Because of his great love for God, he loved others, all without exception, without discrimination. He had fiery zeal and great self-denial. As he himself confessed, he loved martyrdom. Besides, all his life was a continuous martyrdom and a thunderous testimony for Christ. However, he also tasted of many spiritual joys and heavenly blessings.

What is striking was his great obedience to Christ and the Church. When the Bishop invited him to become a Cleric, immediately he responded with great eagerness, because he considered the call to have come from God Himself, although he had not previously considered it and although he was a successful physician-surgeon with a great reputation. He notes in his autobiography: "I know there are very many people that wonder how I managed, having gained fame as a wise and great surgeon, to leave science and surgery to become a preacher of the Gospel of Christ. Those who have such thoughts, make a big mistake thinking that it is impossible to reconcile science and religion... The history of science teaches us that even the genius sages Galileo, Newton, Copernicus, Pasteur, and our great physiologist Pavlov, were deeply religious people. And I know that among our professors, our contemporaries, there are many who believe. Indeed, they even ask for my blessing." And then he stresses, through experience, that both the work of a Cleric and a physician is one of healing and the relieving of suffering among our fellow human beings: "Without realizing it, the Lord in my tender youth led me to the priesthood, which I never thought about, since I passionately loved being a surgeon and I was dedicated to it with all my soul. This service fully satisfied my ambition I always had to serve the poor and suffering, and I disposed all my strength to alleviating their pain and to aid their needs."

Second, Saint Luke as a true shepherd nourished his rational flock entrusted to him by Christ through the Church with the pure milk of Orthodox teaching. He never ceased to preach and catechize the people of God, despite the recommendations, prohibitions and harsh measures of the state power. His words were not the result of reflection, but the radiance of his pure and fiery heart, since what he taught was primarily his personal experiences. Throughout his life he practiced what he preached, which is why his words resonated in people's hearts and caused true repentance and spiritual regeneration. His words were fiery, because they came from a heart full of the fire of the Holy Spirit, that did not consume his listeners, but refreshed them and gave them strength, courage and consolation. His homilies, which have been preserved and published, continue today to teach, comfort and inspire all those who wish to live according to God's will.

In what follows, we will have a small taste of his inspired words:

"It has become a bad habit, that once we learn something about our neighbor, we go to trumpet it everywhere. Our tongue burns us and we rush to tell others what we saw or heard. We forget that we have no right to judge our neighbor because it is not our business, but God's, Who is the Supreme Judge, and Who knows the heart of man and can yield a just judgement. But we condemn our neighbor and often with strong words. We do not consider that our brother may repent and perhaps already left his sin, because he deeply repented."

"One of the most important goals of our lives is to learn to be patient... If you have terrible pain that torments you and you cannot endure any more, look upon the Son of God with His head bowed wearing a crown of thorns. Think how many times they struck his head, think of the pain they caused the Savior with the thorns, and you will learn to endure your pain."

We will achieve the purpose of our life, which is our communion with God and the acquisition of eternal life, if we lift our cross till the end without murmuring, and if we drink from the cup of patience till its empty. Elizabeth Robinson8/29/2015 9:36 pm
I have only recently come across the wonderful and uplifting story of this true confessor Archbishop Luke of the Crimea. Not only is he all a doctor should be but all a hierarch should be and I love to read about this wonderful saint. Thank you!
×