Today, the fourth Sunday after Pentecost, we celebrate the memory of all the saints of the Pskov-Caves Monastery in Pechory, Pskov Province, Russia. This monastery became especially important to the Russian Orthodox people during Communist times, because it was the only men's monastery in Russia that was never closed by the atheist regime, becoming an oasis of Orthodox life in a socialist desert. 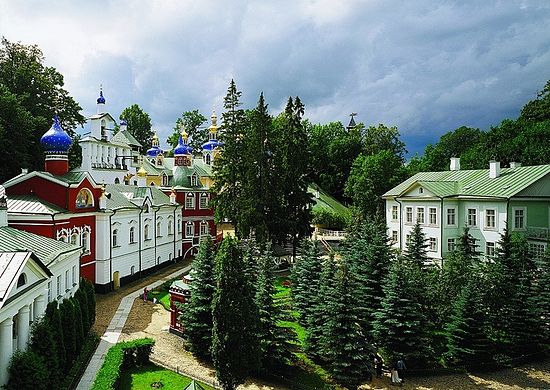 The Holy Dormition Pskovo-Pechersky (Pskov-Caves) monastery is located on the historically Russian land, 50 kilometers to the west of the city of Pskov, near the very border of Estonia and 340 kilometers from St. Petersburg.

The date of the monastery's foundation is considered to be August, 15/28,1473. It was on that day that the monastery's founder, St. Jonah (Shesnik) consecrated the church of the Dormition of the Most Holy Mother of God—a church which was built into the hillside. But the monastic life had actually begun there much earlier, when a few hermits, seeking solitude, came to live in the caves. The holy relics of one of them, St. Mark the desert-dweller, still rest in the caves and many people come to venerate them. The monastery's chronicle relates that "the Most Pure Virgin herself chose this site in the valley of the Kamenets spring, blessed it, exalted it through her chosen people and has been protecting it ever since. Five centuries have passed, and the monastery has seen both glory and tragedy, but never have the holy lampadas gone out, nor prayer ceased in this blessed place.

The monastery gradually grew in size and reputation. The 16th century was the time of its flourishing, when under Abbot Cornelius the Annunciation and St. Nicholas Churches were erected as well as the stone belfry and the monastery was fortified around by a stone wall with bastions, and the brethren numbered up to 200. Abbot Cornelius collected a rich library, established chronicling and founded an icon-painting workshop. The monastery became an important missionary center and stronghold of Orthodoxy on the western border of Russia. Tradition has it that, slandered by envious people, Abbot Cornelius was beheaded by Tsar Ivan the Terrible on the 20th of February, 1570 and now numbers among the hosts of holy martyrs.

In the 16th and 17th centuries the monastery suffered from numerous attacks by the "Latins"—Polish and Lithuanian troops, as well as by the Swedish and German soldiers. The most serious attack was lead by the Polish King Stephan Batory in the autumn of 1581.

In 1920 the town of Pechory, in accordance with the Tartu Agreement, was given to Estonia, and the monastery found itself outside Russia. This new situation did not affect the church services in the monastery—they never ceased; however, the new authorities caused a lot of problems and distress to the brethren.

After the Second World War, in the 50s, the revitalization of the monastery began, and Archimandrite Alipi (Voronov, +1975) contributed much to it. It was under his abbacy that all the churches were repaired and the stone wall and bastions were restored to their original appearance.

During those years the spiritual life of the monastery also flourished. Under the Holy Protection of the Most Pure Mother of God were gathered many ascetics and elders. Through their prayerful pastoral labours lived the great tradition of Orthodox asceticism and eldership. This tradition is still carried on in the monastery by Archimandrite Adrian (Kirsanov). 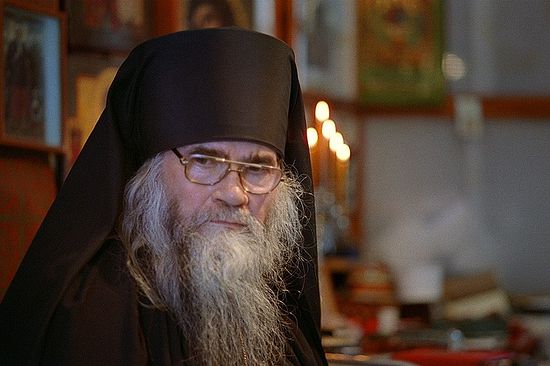 Now there are ten churches in the monastery. It is in the oldest gold-domed Dormition church that one can see and venerate the miracle-working icon of the Dormition of the Most Pure Mother of God and the relics of the Holy Martyr Cornelius. Currently the monastic community numbers over 90. The brethren celebrate daily morning and evening services, perform perpetual psalter reading and spiritually guide a large number of people seeking their wise spiritual counsel. The monks also labour in the monastery fields and stable. There are an icon-painting and an icon-restoration workshops and a Sunday school. The monks run a House of Mercy which comprises a Pilgrim's house and a hospice for aged monastery workers. The monastery is also renowned for its children's choir.

In 2013 the monastery marked the 540th anniversary of its existence and salvific work in the Orthodox Church. The years pass, governments and empires rise and fall, but the monastery ever remains a firm stronghold of Orthodoxy in a restless world. 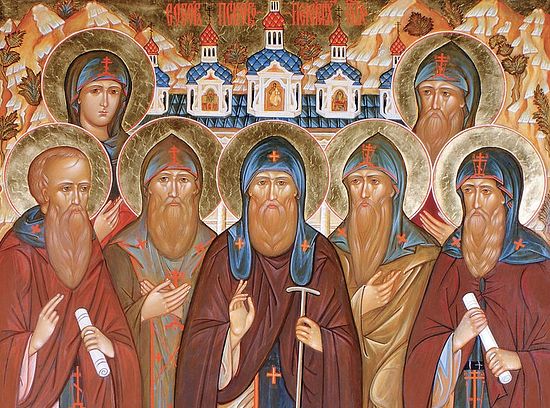 The icon of the Saints of the Pskov-Caves Monastery depicts the founders and early saints of the Monastery (left to right): Jonah, Vassa (St. Jonah's wife before they both became monastics. Vassa lived outside the Monastery walls, and aided the brethren by gathering berries and mushrooms), Lazar the Clairvoyant, Cornelius, Dorotheos, Mark, and Vassian. 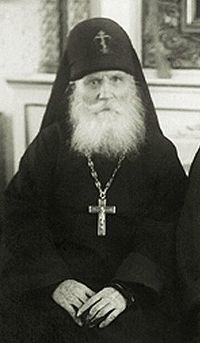 St. Simeon
Canonized in more recent times are St. Simeon (1869-1960, canonized in 2003), and Holy Hieromartyr Alexander (Petrovksy, 1851-1940), who died in prison after being sentenced by the Communists for his faith.

Although not yet canonized, there are a number of contemporary ascetical fathers of the Pskov-Caves Monastery, who are especially revered by the brethren and faithful. These include:

—Metropolitan Benjamin (Fedchenkov, 1880-1961), who represented the Moscow Patriarch in both France and America, but ended his days as a brother of the Pskov-Caves Monastery. 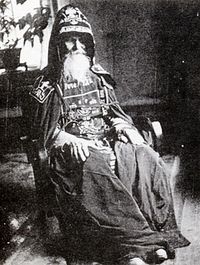 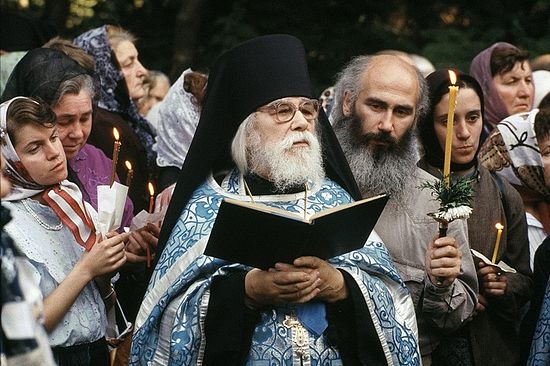 Also numbered among the ascetics of piety of the Pskov-Caves Monastery is Righteous Matthew of Isborsk. Isborsk is an ancient town not far from Pechory, with its later settlement, Maly, located nearby. Righteous Matthew was bed-ridden for forty-five years, and reposed in 1905, after bringing much spiritual help to those who came to him.

The Pskov-Caves Monastery remains an important place of pilgrimage for the Orthodox faithful in Russia and the world over. Thousands have found there healing and transformation, good counsel and support, through the prayers of its saints and holy elders. Fr. Abbakum and the Pskov Religious Affairs Commissioner
Archimandrite Tikhon (Shevkunov)
That is just how it was. From early morning, at his post by the Holy Gates, Fr. Abbakum, demanded that every person entering the monastery read the Nicene-Constantinople Creed, composed by the fathers of the first and second Ecumenical Councils in the fourth century. His calculation was ingeniously simple: every church-going Orthodox person knows this text by heart. About Archimandrite John Krestiankin
Archpriest Mikhail Pravdoliubov
On February 5, 2006, Russia's beloved elder, Archimandrite John (Krestiankin), reposed in the Lord. The Pravdoliubov family, full of priests and even new martyrs, lived in Ryazan Province, where Fr. John served for many years as a priest in various parishes. This family has produced even more priests, one of whom serves in the Resurrection Church in Moscow, and has written his recollections of a life-long relationship with the wise spiritual instructor. Mean Old Fr. Nathaniel
Archimandrite Tikhon (Shevkunov)
During those atheistic years, soviet workers who came to the monastery expected to find any sort of reactionary, sly money-grubber, ignorant and not quite human; what they did not expect was what they actually saw—slightly peculiar but very interesting, educated and clever, extraordinarily brave and inwardly free people who knew things that the guests had never even guessed. After but a few minutes it would be clear to them that they had never met anyone like these monks in their whole lives.
Comments