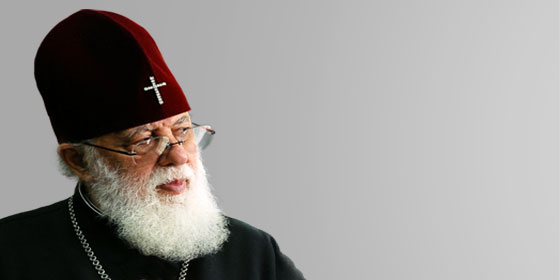 Head of the Georgian Orthodox Church, Patriarch Ilia II, said in his Sunday sermon that the U.S. Supreme Court’s ruling legalizing same-sex marriage throughout the United States was a “big mistake.”

He raised the issue when speaking about freedom in his sermon in the Holy Trinity Cathedral in Tbilisi.

“Freedom has a huge power; freedom is a test in which a person sees spiritually the path,” Patriarch Ilia II said. “Often freedom is misused by people and this is disastrous for spirit. Neither ten commandments, nor laws and customs would have been required if people were given complete freedom.”

“There are cases when people and countries legalize illegality. You know from the media and the press that the United States of America has decided to allow same-sex marriage in all the states – this is a big mistake and even the American spiritual figures say it; and we too reiterate that this is a big mistake,” he said.

“A Georgian should distinguish between good and evil; between acceptable and unacceptable; we ask God for opening our minds and hearts to let them see good and evil,” he added.

A film on Patriarch Ilia II released (in Russian)
The annotation about the film reads: “He has been primate of the Georgian Orthodox Church for 37 years now. Any believer may call on him for prayer and a piece of advice, and homeless people find their refuge right in the office of the Patriarchate. He visits prisons and arranges free dinners for the destitute... For modern Georgia he has become someone like a real Biblical patriarch."
Comments

Violet Pretty7/2/2015 2:32 am
Father it is important to listen to their needs. But all the guy persons and courts and jury's must understand it is not in the best interests of the orthodox churches world wide. If they really want to marry suggest they detour elsewhere. As thes guy people have their rights, We Orthodox also have the right to disclosure this right through our churches world wide/internationally. Explain we are really sorry we are not able to preform such Union in our churches. Is is not anyone's judgement to change he laws of God. Only God himself may change this. If it was intended it would have been so written in king James Bilbe and in scriptures. As we have nothing to gain as we would loose our identities as orthodox Christians by permitting guy marriages in in temples. We are sacred believers shall uphold our beliefs and relious practice of orthodox Christians. nor should we pursuant to be pressured and bullied for our beliefs/ religion to change for others beliefs. It would be like asking a Hindu to change to the Koran. To us our religion is scared. We could not live with this type of changes as we are not coped to deal with guy rights issues as we do not March the streets with signs for guy right. The courts must abide the law of orthodox as it is a right as too a mother and protecting her child in law. It is our law there is no such act to be preformed within our culture or religion. Amen
God Bless
×