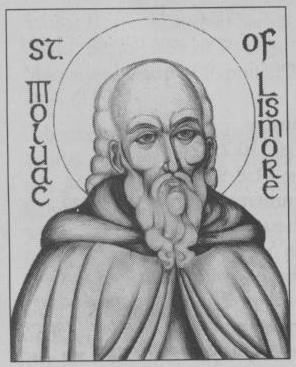 St. Moluog (also known as Moluoc, Moluag, Molua, Molloch, Lugaidh and under other forms)[1] was an Irishman destined to become one of the most venerated saints in Scotland. He was born in about 530 in what is now Northern Ireland to a noble family. His first monastery was Bangor in Ireland; and about the year 562 he crossed the Irish Sea and founded a monastery on the Scottish isle of Lismore. According to tradition, the rock on which the saint stood on the Irish shore miraculously separated itself from the mainland and drifted towards Scotland, delivering Moluog right to the isle of Lismore. It is recorded that another Irish saint, St. Comgall, who was Moluog’s spiritual father, came to Scotland together with him. Moluog became the first abbot of Lismore, and made this monastery the center of his mission in Scotland. Lismore was also the long time burial place of the Pictish kings. 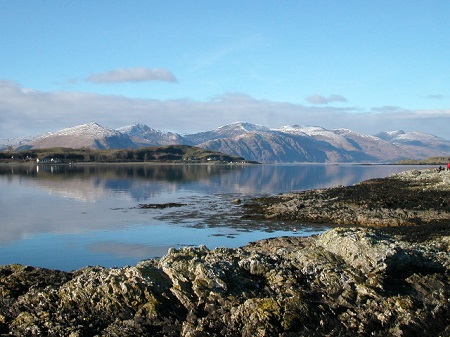 Isle of Lismore and hills, Scotland
From there the saint made missionary trips to the Isle of Skye (the most northerly island in the Inner Hebrides), to the Outer Hebrides group and to the Great Glen in the east. He mainly preached in the areas which were predominantly Pictish; as we see, the saint travelled far and wide, visiting islands around Scotland and the Scottish mainland alike. The holy missionary established Christian communities and settlements at Fort Augustus in Inverness and in the glen called Glen Urquhart near Loch Ness, preaching also in the Black Isle peninsula in the Highlands. Due to Moluog’s efforts, the preaching of Christianity in eastern Scotland was very fruitful, and churches were founded in a number of districts there. Moluog may have also been a bishop in Scotland, possibly in Lismore itself.

The saint’s two other principle monastic foundations, along with Lismore, were the Monastery of Rosemarkie in Ross and Cromarty, and the Monastery of Mortlach in Moray—both in northern Scotland. (Mortlach, like Lismore and Rosemarkie, later had a bishop’s see. Today, the name of this tiny town is Dufftown). The saint in fact established three main monastic centers and then founded countless smaller dependent churches and communities in districts adjoining each of them. He arranged the Church life of the newly-baptized Picts in such a way that both pastoral care and education at a high level would be provided first of all to every community. One late source claimed that Moluog “founded one hundred monasteries in Scotland”; obviously this is an exaggeration, but all the same it is indicative of the extremely influential missionary and teaching activities of this saint of God in the country. No doubt through his disciples 100 monasteries were established. 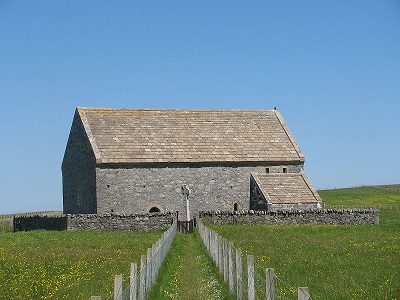 St. Moluog's Church in Eoropie, Lewis and Harris
St. Moluog was the contemporary of another great apostolic figure in the Celtic Christianity of the time—St. Columba of Iona. It is also likely that Moluog had some connection with St. Brendan the Navigator, both of them being prominent voyagers. Moluog reposed in the Lord on June 25/July 8, 592, probably at Rosemarkie, though an old tradition claims he passed away in a tiny hamlet of Ardclach in Nairn (in the Highlands) where an ancient church was later dedicated to him. With time his holy relics were translated to Lismore, where they were much venerated in the Cathedral dedicated to the saint.

Today, numerous churches in several of the main regions of Scotland are dedicated or at least connected with this saint (some of them were re-dedicated to other saints when Scotland became Roman Catholic, or otherwise after the Reformation). In many cases it is difficult to say if one or another church was originally erected by Moluog himself or by one of his disciples of the first or second generation. According to a popular tradition, in Lewis (Outer Hebrides) the name of St. Moluog was invoked against madness, and many lunatics were healed there. Moluog’s staff, made of blackthorn and gilded with copper, is kept in Lismore to this day. The saint’s personal bell, another relic associated with him, existed until the Reformation when it disappeared. However, afterwards in Argyll a very ancient bell was discovered, which was presumably recognized by some to be that same bell of Moluog! St. Moluog is considered by many to be one of the chief apostles of the Picts in Scotland. For many centuries he was officially venerated as the patron-saint of Argyll. Lismore (now situated in the Argyll and Bute administrative area), founded by him, was a significant center of Celtic Christianity in western Scotland. In the Middle Ages it also had a large and prosperous diocese, with St. Moluog as its patron. 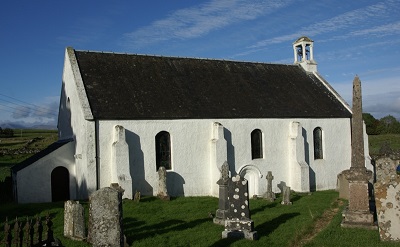 Former St. Moluag's Cathedral in Lismore
Since ancient times, many churches in Scotland have been dedicated to this holy man. First of all, there is the former Cathedral of St. Moluog—“Kilmoluag” (“Church of Moluag”) situated in Lismore on the site of the saint’s main monastery. The national Presbyterian Church of Scotland, as we know, has no bishops, so the surviving part of this Cathedral is now used as a parish church. After the Reformation most of the ancient Scottish cathedrals were either partly or completely destroyed or converted to parish churches. From Lismore Cathedral only the choir survives more or less intact. Lismore is now an isle with a total area of just over 9 square miles and a population of just under 200 people. Its name means either “great garden” or “vast enclosure”. In the golden century of Western European Orthodoxy, Lismore was a prominent monastic and missionary seedbed within the Celtic world. 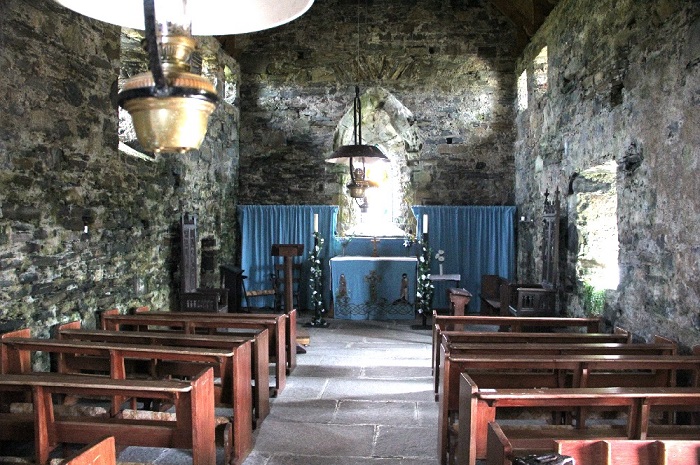 A thirteenth century church in the small village of Eoropie in Lewis (the most northerly village in the Isle of Lewis) is dedicated to St. Moluog. Most probably the saint named Ronan (who later lived on the isle of Rona) built the original church that stood on this site. The church has two side-chapels, and there are also ruins of two other ancient churches nearby, to the northeast and southwest respectively. It was in this church that madmen were cured through the prayers of St. Moluog throughout the centuries, even after the reformation. Not only lunatics, but those afflicted with various other ailments received healing there. According to tradition, the sick who were unable to reach this remote island village sent small wooden figures of their diseased organs and limbs to the church—and nevertheless were miraculously cured. According to evidence from the seventeenth century, such wooden figures were still lying on the altar of this church, and miracles were occurring there at that time. 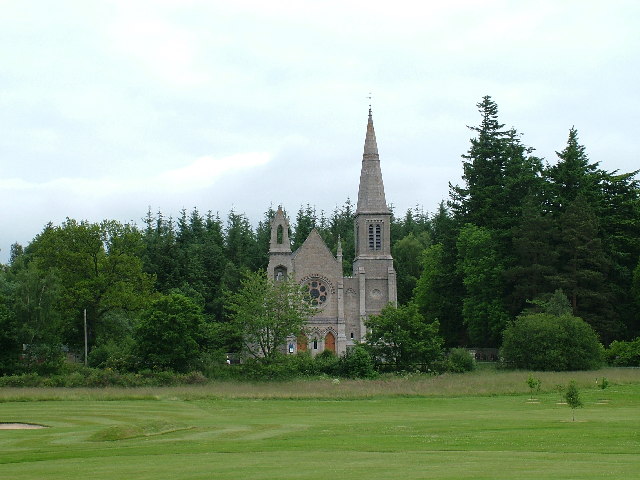 An early church in the ancient village of Tarland in the county of Aberdeenshire is dedicated to St. Moluog, and this is not the only church dedicated to our saint in this county. Once Tarland hosted an annual fair in honor of Moluog as did the village of Clat in the same county—there the fair lasted for eight whole days. A church in Clat is dedicated to him as well. 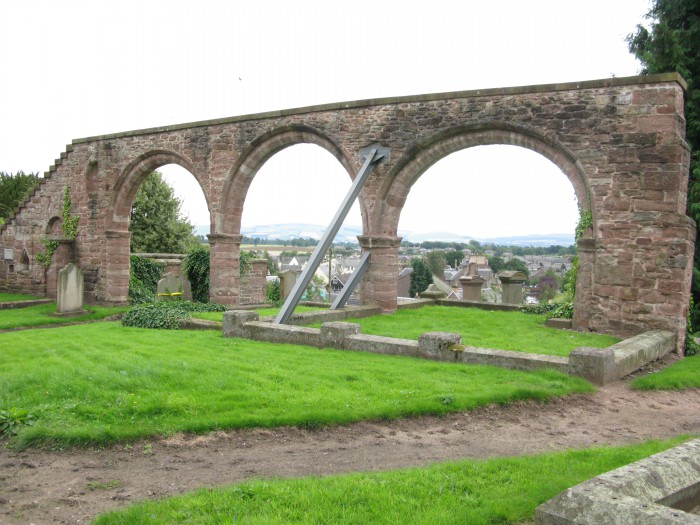 Ruins of St. Moluog's medieval Church in Alyth, Perth and Kinross
The village of Alyth in Perth and Kinross is also closely associated with this saint. The first church on this site was built by the saint himself and later it bore his name. Now this church is in ruins. In the nineteenth century, a new church was built nearby that stands there today. As a relic this church’s porch holds a unique eighth century Pictish cross that was discovered buried. There was a fair in this village in memory of Moluog many years ago.

Dufftown, where Moluog founded one of his great monasteries, is now famous as a producer of scotch. From time immemorial Moluog was the main patron of the area. In 1010 a new monastery was erected (or the old one re-founded) here as a sign of gratitude by the Scottish king Malcolm II, who prayed to him to protect the Scottish army at the battle of Mortlach against the Danes, and received his help. It is believed that from that time a portion of the saint’s relics was preserved there. 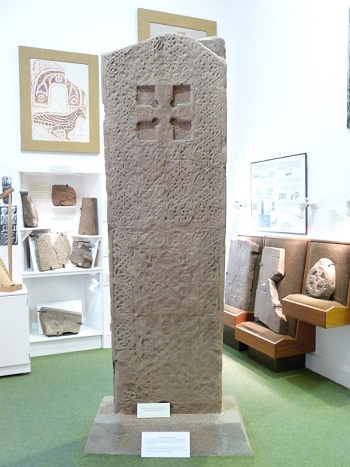 A Pictish stone in Rosemarkie (8th century)
The name of the today’s village Rosemarkie (where the saint built one of his chief monasteries) means “headland of the horse stream”. It lies on the south coast of the Black Isle peninsula in the north of Scotland. Nowadays it is mostly famous for a large number of so-called “Pictish decorated stones” that were discovered there. It is almost certain that these “stones” came from the Celtic monastery founded by or linked to Moluog. Many of these “stones” are pieces of fine, carved figures as well as slabs of ancient crosses, tombs and fragments of the early monastery’s fabric. It is also believed that the tombstone above the grave of St. Moluoc (a sandstone slab) can still be found in Rosemarkie. Notably, another great preacher who lived in the seventh to early eighth centuries is associated with this village as well. This is St. Boniface Curetan who had an episcopal see in Ross.

Churches dedicated to St. Moluog can also be found on the Scottish islands of Skye, Tiree, Mull, Pabbay and Raasay. A huge number of place-names across Scotland comprise diverse forms of his name (sometimes corrupted) and thus bear evidence to his or his disciples’ activities. For example, two settlements on the Kintyre peninsula in western Scotland in Argyll and Bute are called “Kilmoluag” indicating that churches in his memory were once founded in these places. Also ancient churches or chapels established by St. Moluog exist or formerly existed in Morvern, Inverary, Ballagan, Rhynie, Peffray, Cromarty, Clova, New Machar, Migvie and other sites. The Martyrology of Oengus, probably compiled by St. Oengus the Culdee, calls St. Moluog a pure, bright and pleasant man, and “the Sun of Lismore”. 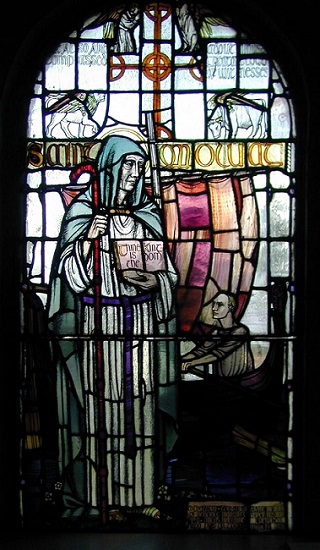 A window depicting St. Moluog inside his church in Lismore

Holy Father Moluog, pray to God for us!

[1] It has been suggested by researchers that the original name of the saint was Lugaidh but later it was transformed to “Moluoc”, i.e., “my Lugaidh/Luoc”. These affectionate forms of names were common in the Irish tradition.

Holy Hierarch David, Patron Saint of Wales
Commemorated: March1/14
Dmitry Lapa
The abbot led the same simple life as his monks and worked as hard as any of them. All the community members wore simple clothes and all their belongings were held in common. Voluntary poverty and the refusal of all possessions were among the main rules of the monastery. St. David himself, like many other Celtic saints, used to retreat to the river to read the whole Psalter, standing in cold river water even in winter.
Comments
×