The Tears of the Apostle Paul

His Eminence Metropolitan Seraphim of Kastoria 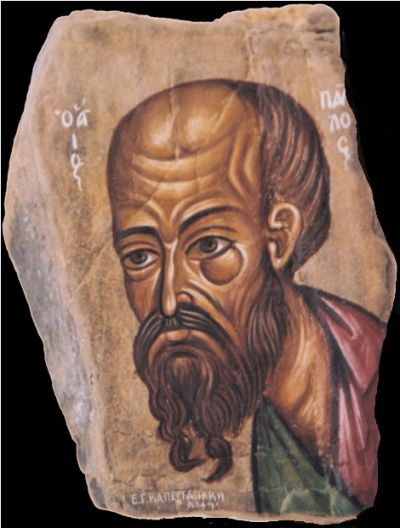 On the Apostle Paul, "the lofty and great ... who was almost incorporeal and the prisoner of Christ's love," the governor of the Church and the corrector of the ecumene, the educator and father, the tent-maker and landless, as he was characterized by Saint John Chrysostom, will this poor and insignificant discourse deal with.

Who was the Apostle Paul? The golden-tongued John describes him:

It is he who ran around the world preaching.

He overcame his natural needs.

He lived as if he had no body.

Even his clothing was able to heal.

The devil trembled at his voice and shadow.

Even the beasts revered him, and the rough sea feared him.

He was a citizen of Paradise.

He was raised to the third heaven.

He was the chosen vessel.

He was the bride leader of the Church.

He ran over land and sea.

Everywhere he set up trophies of his own bravery.

He was a passionate lover of Christ, hotter than fire, stronger than iron, harder than a diamond.

We are moved by such a figure. He is the Apostle of our Greek Nation, the Apostle of Europe which is constantly torn apart and its land painted in blood. At this eleventh hour it is worth pausing on a phrase of the great Apostle that captures his anguish as well as his crying and tears on the paper of his epistle:

For, as I have often told you before and now tell you again even with weeping, many live as enemies of the Cross of Christ (Philip. 3:18).

1. "I weep for the enemies of the Cross of Christ."

It is not the first time the Apostle uses such salvific pastorship. For he advised, begged and urged, because he was indeed concerned for all the churches (2 Cor. 11:28), and his sensitive heart resorted to salvific tears which like precious daisies arrived as supplications before the Divine Majesty. We also encounter the tears of the Apostle in the book of the Acts of the Apostles: So be on your guard! Remember that for three years I never stopped warning each of you night and day with tears (20:31). And this cry of the Apostle was for those Christians who rather than choosing the Cross of Christ, which the winged Apostle boasted in (May I never boast except in the Cross of our Lord Jesus Christ, through which the world has been crucified to me, and I to the world. Gal. 6:14), they chose the spacious path that leads to the loss of eternal life. Not only were they not co-cyrenians of Christ, carrying on their shoulders the Cross, but they became His enemies.

2. "I weep for the enemies of the Cross of Christ."

In the time of the Apostle Paul there were Judaizers and false brethren—those who preferred circumcision, which was a dead type, without caring about the substance of their salvation. They were those who preferred the life of comfort and not the life of the Cross; the mindset of the Cross which is asceticism, sacrifice and the mortification of the passions. They were those who had no consequence in their lives and, instead of living wisely under the shadow of the Cross, they spoke of Christ with comfort, in order to attract more followers. Good-times, comfort and worldly evolution were the objectives of these "Christians", for whom fiery tears ran from the eyes of the Apostle. For them, and for each of us, the words of Saint John Chrysostom are characteristic: "Your Master is crucified and you seek convenience? Your Master is affixed with nails and you seek delights? And where in these is a brave soldier?"

3. "I weep for the enemies of the Cross of Christ."

If this general of the Church was among us today, again his tears would run endlessly from his eyes. Tears:

—for those who abuse and blaspheme the Cross of Christ,

—for those who are ashamed to make the sign of the Cross and not love the life of the Cross,

—for those who do not walk according to the citizenship of the Cross,

—for those who with their temporary power test the patience of the people, and oppress and tyrannize the human person, being scornful and disrespectful towards the unrepeatable divine image in man,

—for all sorts of heretics who like wolves do not spare the flock and speak perverse things in order to draw away disciples after them (Acts 20:30),

—for those who create schisms and divisions, putting the spotlight on themselves and supposedly work to present themselves as saviors instead of the true Savior Christ.

4. "I weep for the enemies of the Cross of Christ."

They are all those who, while supposed to be leaders of God's people, became rearguards. So, when they should have been a city set on a hill (Matt. 5:14), they forgot their mission and the salt, according to the word of Christ, dissolved in their hands. They were characterized by fraud, lies, falsity, lack of integrity, lack of militancy, and thus have reached disrepute after they went bust in the minds of people and became unreliable.

They are those who by their own ideology and philosophy, stood as enemies of the faith and with the poison of denial and slander irrigate the hearts of the people and try through deception and lies to impose their views using excellently the art of impressions.

They are those whose motto is to delete God from the vocabulary of their lives and they say to Him: Depart from us; for we desire not the knowledge of Your ways (Job 21:14).

And, while after so many years of the living presence of Christ in the world and in history there ought to prevail love and peace which surpasses all understanding, instead we are dominated by lies and falsehood, hate and the worship of idols and above all the worship of money.

For all these and for all of us, but also "for Europe that took the Cross of Christ from her heart and sewed it to her back and made the bloody symbol of freedom into a bloodthirsty weapon of tyranny that ravaged countries and peoples to reign on this earth," the Apostle Paul weeps and laments.

These tears are therapeutic, paternal and loving, like the tears of the Prophets of the Old Testament for the apostate people, like the sacrifices of Righteous Job on behalf of his sons.

These tears of the Apostle, of the Saints of yesterday and today, pleadingly toward God, will save us.

Today, therefore, with the difficulties our country faces, his memory is honored, and his words are again interventional and therapeutic.

They are the same words given to the jailer of Philippi: Believe in the Lord Jesus Christ, and you and your household will be saved (Acts 16:31).

Faith in the person of Christ will be our salvation and the sunrise of a new life, both earthly and primarily heavenly.

Paul, Apostle of the Nations, Teacher

Enlightener of our Nation and of all Europe,

Implore Christ the Savior for the salvation of God's people

For the salvation of our country, at this last hour. The Christian Parthenon and St. Paul
Nun Nectaria (McLees)
St. Paul was the &#64257;rst Christian missionary to preach in the celebrated intellectual stronghold of the Greco-Roman world. Indeed, Athens still reigned as the university of the Empire; she lived on her reputation as the city of the philosophers, and her streets were &#64257;lled with the arguments of Platonists, Stoics, and Epicureans. Other intellectual centers had arisen in Rome, Alexandria, Antioch and Tarsus, but Athens remained indisputably the queen. Akathist to Saints Peter and Paul

Akathist to Saints Peter and Paul
O most glorious Apostles Peter and Paul, who laid down your lives for Christ and beautified His pasture with your blood! Hearken unto the prayers and sighs of your children which are now offered up with contrite heart. For, lo! we have darkened ourselves with iniquities, and for this cause have we been covered with misfortunes as with showers; and we have become exceeding poor in the oil of a good life, and we cannot fend off the ravening wolves which boldly strive to lay hands on the inheritance of God. Sermon on the Holy Apostles Peter and Paul
Archpriest Andrew Phillips
It is also claimed that not only did the apostle Peter found the Church of Rome, but that somehow this gives the Church of Rome some special supremacy and superiority over all the other Churches. This is clearly not true, for the Church of Antioch, which was founded by St Peter, has never claimed any superiority. In reality, when our Lord says in the Gospel: ‘Thou art a rock and on this rock I will build my Church’, it refers not to some special authority given to Peter, it concerns all who confess Christ as the Son of the Living God. All who make this confession have authority, all who confess Christ truly are rocks and are granted the keys to the kingdom.
Comments