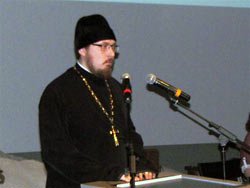 The deputy chairman of the Synodal Department for Church-Society Relations, Priest Roman Bogdasarov, has called for protection of the rights of the adherents of the Ukrainian Orthodox Church of Moscow Patriarchate (UOC MP) at an Organization for Security and Co-operation in Europe (OSCE) meeting on the freedom of religion and belief.

"During a number of events held on the sidelines of major formal meetings, presentations were held of biased reports about the oppression of members of schismatic organizations in Ukraine, about alleged instances of violence on the part of UOC MP priests, about pressure on the part of the Russian political power on the official churchdom in Ukraine," Father Roman told Interfax-Religion.

In response to these allegations by representatives of nonprofit organizations, the priest cited statistics about the rising number of seizures of the UOC MP churches by schismatics "with the tacit approval by the Ukrainian authorities," about the torturing of priests of the canonical Orthodox Church of Ukraine, about the stealing of church property and violence against the UOC laity and clergy.

The Russian Church representative stressed particularly the invariably peaceful position of Metropolitan Onufry of Kiev and All Ukraine and told about the prayers being made with the blessing of Patriarch Kirill at all Russian Orthodox churches for the fratricidal conflict in Ukraine to end.

At an OSCE conference in mid-May 2015, Priest Dimitry Safonov, the head of the sector for interreligious liaisons at the Russian Orthodox Church's Synodal Department for External Church Relations, said that 77 churches and monasteries had been damaged or demolished during the armed conflict in eastern Ukraine. A month later the UOC Synod stated that schismatics from the so-called Kiev Patriarchate had recently seized 23 churches of the canonical Church.