“For Thine is the Kingdom, and the Power, and the Glory forever. Amen.” 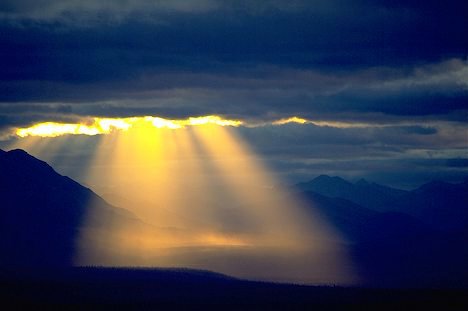 The Lord’s prayer is truly wonderful beyond description. It lifts us up to “our Father Which art in Heaven.” It calls us to become perfect living temples in which the name of the Lord is hallowed. It encourages us to be angelic in obedience to His will. It instructs us to seek nourishment in His word and through His divine mysteries. It exhorts us to become exemplars of forgiveness, humility, and trust in God. And when the last petition about seeking deliverance from the evil one has been made, we on earth glorify “our Father Which art in Heaven” even as do the angels on high, saying “For Thine is the Kingdom, and the Power and the Glory forever. Amen.”

This short epilogue to the Lord’s prayer is reminiscent of King David’s words as he offered treasures unto God, saying “Thine, O Lord, is the greatness, and the power, and the glory, and the victory, and the majesty: for all that is in the heaven and in the earth is thine; Thine is the kingdom, O Lord, and thou art exalted as head above all (1 Chronicles 29:11). The treasure we have just offered, however, consists not of earthly jewels, but of the fundamental virtues that grace the Christian who has prayed this prayer: an inclination to obedience, forgiveness, and humility. “Thine is the kingdom, and the power, and the glory” teaches us to conclude every prayer with thanksgiving and praise to God. It is not only a doxology. It is also a confession of faith that though we be weak vessels of clay, nevertheless, we are also under a powerful and glorious King (Saint John Chrysostom, Homily 19 on Matthew). Saint Augustine notes that when “in heaven the angels praise God, they see the very form of truth, without any darkness of vision, without any admixture of unreality: they see, love, praise, and do not become not weary” (On Psalm 57). “Thine is the Kingdom, and the Power, and the Glory” is thus a confession of the very truth of reality that brightens our vision with angelic clarity and illumines our hearts with the light of heaven.

And so we exclaim, “Thine is the Kingdom and the Power and the Glory.” And what we confess with our lips, we are also to manifest with our way of life (Saint John Chrysostom, On Psalm 212, PG 55.299): living as befits citizens of God’s kingdom, trusting in His measureless power and being in awe of His radiant glory. When said humbly from the heart, this praise of God can bring down God’s mercy like the dew of Hermon, protecting us even as the three children were not only protected from the flame in the midst of a fiery furnace, but were also accounted worthy of beholding the Son of man (Saint John Chrysostom, Homily on Holy Week, PG 55.522).

The Kingdom, the power, and the glory all bespeak God’s purifying, illumining, and deifying grace that can completely transform the children of Adam into children of light. They are His, indeed. But we also knows that He desires that they be ours. For from Christ’s own lips, we hear about the “kingdom prepared for you from the foundation of the world” (Matthew 25:34). From Him, we know that “it is your Father’s good pleasure to give you the kingdom” (Luke12:32). And so in Liturgy, after the people say the petitions of the “Lord’s prayer,” the priest responds by taking us where that prayer ultimately leads us: the Kingdom, Glory, and Power of the Triune God. And so in its Liturgical form, this prayer of all prayers closes, or rather opens up even further, with words from the highest heaven “For Thine is the Kingdom and the Power and the Glory of the Father and of the Son and of the Holy Spirit now and ever and unto the ages of ages.” Amen France (Just Now) Decides Lord’s Prayer Is Blasphemous, Edits Bible
The new, edited French Bible was authorized by the Vatican earlier this year. Other translation changes were also made, a process, according to AFP, that took 70 linguistic and theological experts 17 years to complete. Instructions to Nuns. Prayer Rule
St. Ignatius (Brianchaninov)
In general, in the church of God one should preserve the utmost reverence and order, for the glory of God, as well as for one's own soul's profit and for the profit of those people present, who are to be instructed in reverence by the monastics. But lack of reverence disturbs them, scandalizes them and harms them. Bringing the Monk's Prayers Home from Holy Mt. Athos
Norris J. Chumley, Ph.D.
One truth is certain: Recitation of the Jesus Prayer ("Lord Jesus Christ, Son of God, have mercy on me, a sinner") is very powerful, even for just a few minutes at a time. Whether you're in a cave or monastery, or in the cell of your apartment or suburban bedroom, you don't have to leave everything behind and become a monastic in order to find God in silent prayer.
Comments

Misha Pennington7/9/2015 3:51 pm
Strange essay. In the Church, the priest alone says, ” for thine is the Kingdom and the Power and the Glory of the Father and the Son and the Holy Spirit, now and ever and unto ages of ages.” Was this written by a Protestant?