The abbot of the St. Panteliemon Monastery on Holy Mt. Athos, Schema-Archimandrite Gabriel (in the world, George Vasilievich Legach), was born to a peasant family in 1901, in the village of Kopashnevo, near the city of Hust, Marmaroshsky Province, in the Trans Carpathian Mountain region (at that time this region was part of Austro-Hungary, later Czechoslovakia, and now Trans Carpathia Province, Ukraine). 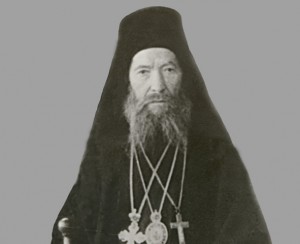 Schema-Archimandrite Gabriel
His father’s name was Vasily, his mother’s was Maria. He received a passably good home education. His grandfather taught him to read and write. His good memory enabled him to learn in a short time what would qualify as a home education.

It must be noted that while it was under the Austro-Hungarian regime, the Orthodox Church in Trans Carpathian Ukraine, after the establishment in 1646 of the Uzhgorod Unia, was totally destroyed. In that region, up to the beginning of the twentieth century, not a single Orthodox parish existed, much less a monastery.

On July 8, 1908, the future apostle to Trans Carpathia A. Kabaliuk received the Holy Orthodox faith. He is now known as St. Alexy of Trans Carpathia. Having received Orthodoxy and taken Holy Communion, he then received from the hand of Archimandrite Misail of the Mt. Athos St. Panteleimon Monastery the Athonite icon of the Mother of God “of the Akathist” with the words, “Receive from me this icon of the Mother of God and take it to your homeland as a blessing of the Holy Mountain.” On the reverse side of the icon was written:

“Holy Mountain of Athos, 1908, eighth day of July. This holy icon of the Most Holy Theotokos, alike in appearance and size with the miracle-working icon from Mt. Athos Zoographou Monastery, was painted and blessed on Mt. Athos, and is given by Abbot of the Russian Mt. Athos monastery of St. Panteliemon, Archimandrite Misail and all the brotherhood in Christ to slave of God Alexander Kabaliuk, newly-united to the catholic Orthodox Church in our holy monastery, from now on our spiritual son, an inhabitant and citizen of Austro-Hungary, as a blessing to him from the Holy Mountain of Athos—the earthly portion of the Heavenly Queen—and our holy monastery dedicated to the holy and glorious Great Martyr and Healer Panteleimon, as a grace-filled help to him in all difficulties and evil attacks from all enemies visible and invisible, and to strengthen him in his solemn promise to be faithful and obedient even unto death to the Holy Apostolic Orthodox Eastern Church, the head of which is our All-Holy Lord Jesus Christ. Amen. Most Holy Theotokos save thy slave. Mother of God, enlighten all those who are in error.”

With this act, at the blessing of the elders of the Mt. Athos St. Panteleimon Monastery, began the rebirth of Holy Orthodoxy in the Trans Carpathian region, headed by St. Alexy (Kabaliuk).”

In 1910, St. Alexy, now in the rank of hieromonk, again visited the Holy Mountain. Here the abbot of the St. Panteleimon monastery, Archimandrite Misail, received him gladly, permitted him to serve in the monastery, and also obtained permission from the Protatis of the Holy Mountain for Fr. Alexei to serve in all the monasteries and sketes on Mt. Athos. The saint lived four months on Mt. Athos until in 1911 he received from Archimandrite Misail an official document proclaiming him a monk of the St. Panteleimon Monastery. After this he departed for Constantinople to the Ecumenical Patriarch, and from thence back to his native land. 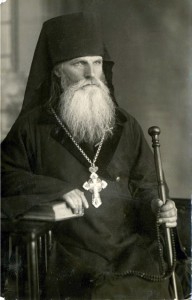 St. Alexy (Kabaliuk), Transcarpathian Carpatho-Russian
In this way, as Igor Yakimchuk notes, the Holy Mountain of Athos had a direct relationship to the rebirth of Orthodoxy in the Carpathian lands. A clear example of this is the Epistle to the Trans Carpathians from Mt. Athos, signed by abbots of the St. Panteleimon Russian monastery, and the Sketes of St. Andrew and Ilias, Archimandrites Misail, Mitropahn, and John. Here is the text:

“Confirm yourselves in the Holy Orthodox faith! Carefully preserve the gift freely given to you of a priceless treasure! Be penetrated with the spirit of Orthodoxy! Cleanse the Eastern rites of the Western corruption with which the Latins have littered it! … You are called Greek Catholics, but at the Great Entrance at the Liturgy the ‘Orthodox’ are commemorated. Why are you, Russians, called Greek Catholics? Because you received your faith from the Greeks. This means that as the Greek faith is, so should yours be. Know, that the Greeks were never Catholics, and always preserved and still preserve the Holy Orthodox Eastern catholic [universal] faith in total incorruption and purity. And there are many Greek monasteries here on Mt. Athos, and they are all Orthodox, and they do not recognize the Roman Pope and never will. The Greeks are called Orthodox by all the peoples of the world, and along with the Greeks are the Russians, Serbs, Bulgarians, and others. There cannot be two Orthodoxies: either the entire East is Orthodox, and the Catholics are holding you by deceit and error, or you, a slight handful of Uniates, are Orthodox; and all the Greeks, Russians, Serbs, Bulgarians—in a word, the entire ancient Orthodox East—have falsely claimed this name for themselves… Your return to the Father’s house—to the bosom of the Orthodox Church, will serve as a redemptive sacrifice not only for your personal sin of error, but also for your ancestors who 300 years ago, out of their ignorance and simplicity, through the deceit and force of the Latins were torn from the Body of Christ—the Holy Orthodox Church. Your prayers for them, enlightened by the true Sacraments of the holy Mother Orthodox Church, will be raised to God as incense pleasing to Him, and will boldly intercede for mercy and their return to the bosom of Abraham from the fires of gehenna.” (Gabriel Krizina), Abbot of the Orthodox Church in Trans Carpathia (20th century). Kiev, 1999, pp. 137-138).

In the words of certain researchers, the seed of the true faith sewn by St. Alexy (Kabaliuk) and his co-laborers produced speedy and abundant shoots. In the 1920s and 30s in the Carpathian lands were seen a massive renaissance of Orthodoxy, a flourishing of monastic life, and scores of new Orthodox monasteries opening where the strict Athonite rule was introduced. The majority of these newly established Trans Carpathian monasteries retained close ties to Mt. Athos, and the more zealous seekers of ascetic life would depart for the Holy Mountain, mainly to the Russian St. Panteleimon Monastery, where in time they made up quite a significant part of the brotherhood. This was particularly obvious after the militant atheist revolution of 1917 in Russia, when the Trans Carpathian region (which ended up outside the borders of the USSR, as a part of Czechoslovakia) remained the only region that provided Russian brothers to the St. Panteleimon Monastery on Mt. Athos. In the 1920’s alone over twenty Trans Carpathians entered the St. Panteleimon brotherhood.

One of these zealous seekers of the ascetic life was the future abbot of St. Panteleimon Monastery, Gabriel (George Legach).

In 1924 he and a group of his young countrymen arrived on the Holy Mountain of Athos, where on June 4, 1924 he became a novice in the Russian St. Pateleimon Monastery. In two years, on March 24, 1926, in the Russian Athonite monastery he received the ryassaphore tonsure with the name Gabriel, and on March 20, 1930 he was tonsured into the mantia with the same name.

Fr. Gabriel’s first obedience was in the roofing workshop. During that period, when communication with the fatherland was lost, the St. Panteleimon Monastery experienced serious material hardships. Therefore many of the monks of the monastery went to collect alms in Serbia, where the center of the Russian immigration was located. Fr. Gabriel became one of these emissaries. He established very good contacts with the Serbian Orthodox Church and inclined the good will of certain of its representatives. There, in Serbia, on July 22, 1937, Fr. Gabriel was ordained a hierodeacon by St. Nicholai (Velimirovich). On January 24, 1949 he was ordained a hieromonk in his own monastery.

After returning from Serbia to his monastery he continued his obedience as a roofer. “With a fearlessness that amazed the brothers he repaired and painted the roofs. The monastery leadership sent him to other obediences as well. Everyone who knew him spoke of his particular love of labor. If Fr. Gabriel was not in church or praying in his cell, then he was without fail at work. He allowed himself but an insignificant rest at night. In the over fifty years of his life in the monastery there was never an occasion when he spent time in idle talk. Fr. Gabriel loved the church. Every day, morning and evening, he came to the church services, and if he was not appointed to serve he sang and read on the cliros. He had excellent knowledge of the rubrics of church services, and in part, the more complex rule of the St. Panteleimon cathedral, where Russian and Greek services were combined. Fr. Gabriel served freely in Greek, and read the Greek Gospels well. He was spiritually guided by elders of lofty spiritual life. Fr. Gabriel was a monk of prayer. He always said the Jesus Prayer. At night in his cell he almost never used a light—he read the cell rule from memory,” as eye-witnessed remembered about him. 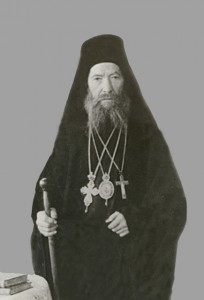 In 1965, Fr. Gabriel was chosen as assistant abbot of the Russian St. Panteleimon Monastery on Mt. Athos, helping the elderly abbot of the monastery Ilian (Sorokin).

After the repose of Abbot Ilian, Hieroschemamonk Gabriel was among the candidates for the abbacy, but at first Archimandrite Abel (Makedonov), who had arrived from the USSR, was chosen instead. However, the Holy Kinotis did not ratify this appointment because Fr. Abel had not lived long enough on Mt. Athos. Therefore Fr. Gabriel was appointed as second choice. His installation took place on April 26, 1971, and on May 13 he was elevated to the rank of Archimandrite.

The years of his abbacy were very complicated. Despite the arrival of a small number of new monks, there were only twelve or thirteen monastics. The political situation in Greece was also still rather complicated: a military junta was in power (the government of the “black colonels”), which continued the politics of not allowing new monks into the Slavic monasteries.

“Our monastery is in an extremely difficult situation, especially due to the lack of brothers. With the passing of time the number of brothers is gradually decreasing—the elderly are dying, and there is no one to replace them. This situation is bringing those who live here to despondency and hopelessness. Knowing the love that the Russian people have for Mt. Athos, we believe and hope that Your Holiness and all the Russian Church will take all possible measures so that this Russian (almost the last one on Mt. Athos) corner with its holy shrines would remain and continue its existence for the consolation of every faithful Russian person.”

On July 4, 1975, due to increasingly bad health and a desire for solitude, Schema-Archimandrite Gabriel submitted his request to retire as abbot. Archimandrite Abel (Makedonov) became the new abbot of the St. Panteleimon Monastery, and Fr. Gabriel helped him according to his strength.

Schema-Archimandrite Gabriel reposed in the Lord on June 26/July 9, 1977. A New Saint for Carpatho-Russia: St Job of Ugolka
It is necessary first to be purified, then to purify; to be made wise, then to make wise; to become light, then to enlighten; to approach God, then to bring others to him; to be sanctified, then to sanctify…
Comments
×