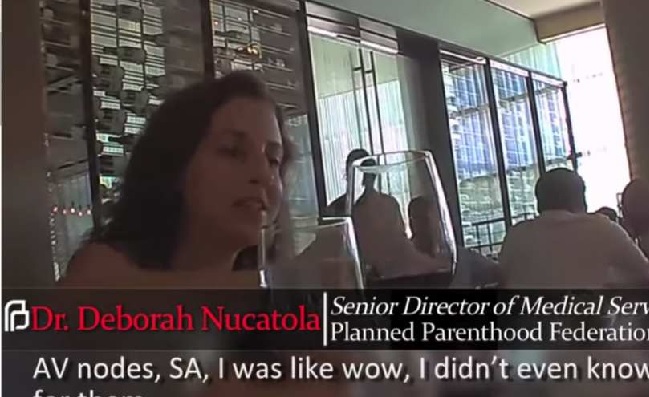 The average asking price for fetal body parts? Between $30 and $100 per specimen.

In the video, she met with investigators posing as buyers from a human biologics company on July 25, 2014.

While casually sipping wine and eating salad, Dr. Nucatola revealed that she charges $30 to $100 per specimen, and that fetal livers are especially in demand—although “a lot of people want intact hearts these days,” and she has had requests for lungs and “lower extremities.”

Nucatola admitted that Planned Parenthood's abortionists take great care not to appear to be profiteering off fetal body parts. She said, “They just want to do it in a way that is not perceived as, 'The clinic is selling tissue. This clinic is making money off of this.'”

The issue is not merely PR—there is also the little matter of federal law. Trafficking in human body parts is a federal felony punishable by up to 10 years in prison and a fine of $500,000.

The method of abortion she describes, on video, also appears to violate federal law.

Dr. Nucatola said she has “a huddle at the beginning of the day” to determine what fetal body parts consumers are requesting, and which patients that day will have babies from which they will be able to harvest them. Then Planned Parenthood abortionists tailor the procedure to assure they do not destroy the organs, maximizing profitability.

“For that reason, most providers will do this case under ultrasound guidance, so they’ll know where they’re putting their forceps,” she said.

She revealed that, as abortionists are dismembering the child, they decide, “I’m not gonna crush that part. I’m gonna basically crush below, I’m gonna crush above, and I’m gonna see if I can get it all intact.”

In order to procure intact organs, she seemed to describe herself and others performing the illegal partial birth abortion method.

“Some people,” she said, taking another sip of wine, “will actually try to change the presentation so that it’s not vertex [head first],”she continues. “So, if you do it starting from the breech presentation [feet first]...often, the last step, you can evacuate an intact calvarium [the head] at the end.”

President George W. Bush signed a law outlawing partial birth abortion in 2003. It, too, is a federal felony punishable by two years in prison and a fine of $250,000.

But, Dr. Nucatola told the undercover investigators, there are ways around the law.

“The federal abortion ban is a law, and laws are up to interpretation,” she said. “So, if I say on day one that I don't intend to do this, what ultimately happens doesn't matter.”

“At the national office, we have a Litigation and Law Department which just really doesn’t want us to be the middle people for this issue right now,” she says. “But I will tell you that behind closed doors these conversations are happening with the affiliates.” (You can read a full transcript of the conversation here.)

In a separate video, the investigators meet with Planned Parenthood CEO Cecile Richards, saying that Dr. Nucatola has been incredibly helpful in their efforts to procure unborn babies' body parts.

In addition to overseeing all medical practices at the abortion giant, Dr. Nucatola has frequently been a media spokeswoman promoting the organization's political concerns.

The video was the fruit of a nearly three-year-long undercover investigation by the Center for Medical Progress.

“Planned Parenthood’s criminal conspiracy to make money off of aborted baby parts reaches to the very highest levels of their organization,” said Project Lead David Daleiden. “Elected officials must listen to the public outcry for Planned Parenthood to be held accountable to the law and for our tax dollars to stop underwriting this barbaric abortion business.”

National pro-life leaders immediately called for a Congressional investigation. “This video provides a shocking reality check about the grisly, inhumane business model of Planned Parenthood,” said Dr. Charmaine Yoest, president and CEO of Americans United for Life (AUL). “Under Cecile Richards’ leadership, breast screenings are down, abortions are up and profits are up, as even the bodies of the unborn become something else for her to sell. We call for an immediate Congressional investigation into these alleged atrocities. And just as important, the time is now to defund Planned Parenthood. The American taxpayer should not be in business with such callous profiteers.”

Organizers are asking that this information be shared on Twitter with the hashtag #PPSellsBabyParts. They also request that everyone contact Congress and demand a full investigation. Supreme Court may take on the ‘biggest abortion case’ in nearly 25 years
While Texas has fought to show abortion is not in the best interest of citizens — working at the state-level to enact pro-life legislation and defunding abortion giant Planned Parenthood —the U.S. Supreme Court is preventing Texas from forsaking the era of Roe to build a culture of life. ‘Roe v. Wade is almost entirely dead’: Half of Texas’ abortion clinics could close after big ruling
Texas will likely see half its remaining abortion facilities close after the Fifth Circuit Court of Appeals upheld a key provision of a pro-life law passed in 2013. ‘I felt like I died’: New TV ads combat ‘happy’ abortion stories with the truth

‘I felt like I died’: New TV ads combat ‘happy’ abortion stories with the truth
The series, entitled “Been There,” features five women whose grief is evident in every frame.
Comments
×