This recent news from Gotland, Sweden tells us several things. First, that there definitely was an Orthodox presence on this Scandinavian island; second, that there may have been a particularly revered Russian clergyman serving there; and third, that more investigation by Orthodox people in Sweden should be carried out in this area. There could be much more to find!

The ruins of an Orthodox church and remains of a Russian priest are offered for sale on the Sweden island of Gotland. 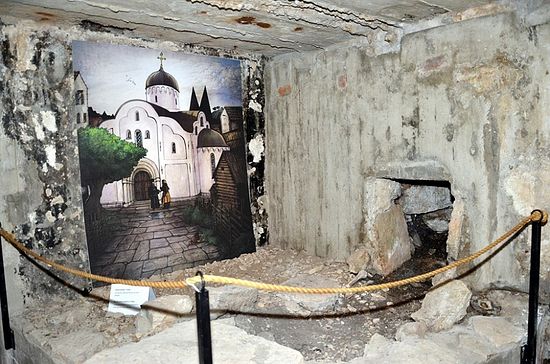 
If a would-be buyer of the “Russian yard” house pays 8.1 million Swedish krona, he or she will obtain two apartments, a restaurant decorated with ancient frescoes as well as ruins (the foundation, nave and apse) of an Orthodox church on which the house is built. The remains of a Russian priest who lived 900 years ago can be found among the ruins. The Swedish website, My home, has published material on this theme, entitled “A house in Gotland is offered for sale: with a skeleton in the basement.” 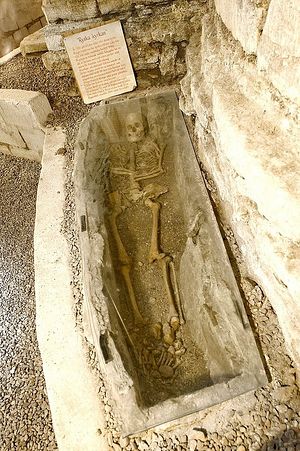 Remains of a Russian priest who presumably lived 900 years ago.
Once in the town of Visby—Gotland’s capital—Russian merchants had their own abode with a thirteenth century church dedicated to St. Nicholas the Wonderworker adjacent to it. The house was constructed on the church ruins in Visby’s central square in 1680. Today the building, known as “the Russian yard”, is an architectural monument under the state protection, but any private individual can be in possession of it.

“The skeleton of an ancient Russian priest passes into ownership as well, so a purchaser will have access to it,” relates real estate agent Leif Bertwig who is in charge of selling “the Russian yard.”

The church ruins were discovered by archaeologists in the 1970s.

“During the excavation work around thirty graves were discovered on this site, and this enabled the Swedish archaeologists to surmise that a settlement of Russian merchants may have been located precisely in this part of Visby. The church building itself is either a parish church or a chapel. Undoubtedly, Orthodox culture left its mark on Gotland which can be seen, for example, in frescoes in the Byzantine style depicting Sts. Boris and Gleb inside one of the oldest churches of the island, known as ‘Garde Kyrka’,” recounts expert in Scandinavian studies, Candidate of Historical Sciences from Immanuel Kant Baltic Federal University Arkady Ryabichenko in his interview with Pravoslavie.ru.

Rector of the St. Sergius parish of the Moscow Patriarchate in Stockholm Archpriest Vitaly Babushin has commented on the latest news from Visby to Pravoslavie.ru: 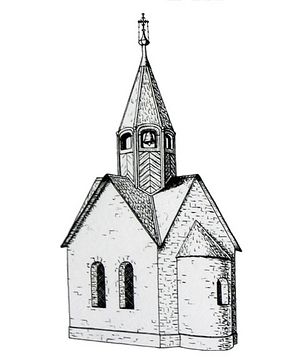 This is what the Russian church might have looked like.
“Two years ago our parish asked owners of the restaurant whose foundations include ruins of the Orthodox church to give a small group of Russian pilgrims access to this memorial site and to allow me to perform a short memorial service there. However, the Swedes were not enthusiastic. They did not refuse permission directly, but pled a possible inconvenience that our visit might cause. I do not quite remember what they meant, but it seems that it had to do with the restaurant timetable. Then I did not know about presence of the human remains, they must have lain concealed. Now that the owners are selling their property, they believe (judging by their announcement) these honorable remains belong to them.

“According to tradition, a Russian priest was buried inside this church in c. 1200. Unfortunately, I have no reliable historical sources at my disposal supporting or disproving this information, so I think these are just pious traditions. However, burials inside churches are often indicative of a royal or grand-ducal origin of those buried, or else of a particularly venerated ecclesiastic figure, which is likely to be the case here. 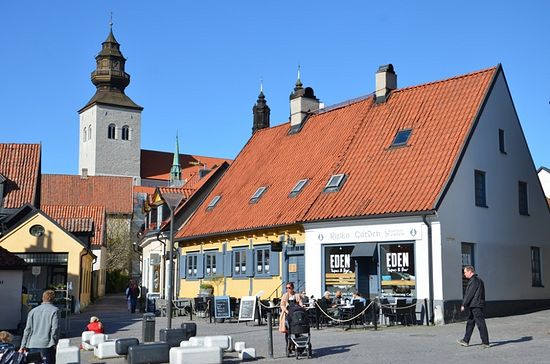 “The Russian yard” in Gotland.

“I will not waste time commenting on the work of the Swedish restaurant where one can have a good meal and drink on the bones of a Russian priest. Now the restaurant along with its properties (including the crypt and the skeleton) are on sale. If we came into possession of this object, then, as Russian Orthodox Christians, we would first of all duly rebury these honored remains and would celebrate a service for repose of all our compatriots who lived and labored in Gotland from ancient times. I feel we could show an example of a genuine Russian Orthodox attitude towards human remains which are to be treated according to the universal values and the God-given gift of life, and not as a part of the restaurant’s property! It is difficult to say how this house may be used in the future. The fact is that as a medieval historical site it is especially protected by the state and you need to use it with its archaeological gems reasonably, considering all the pros and cons. Sadly, we have no opportunity to obtain this object. We hope its new owners will meet us halfway and we will be able to decide the fate of both the church and the human remains interred there.” Secular Sweden Sees No Problem in Sending Christian Converts Back to Iran?
Charisma News reports that Sweden is denying religious refugee status to Iranian Christians, threatening to extradite them. Applicants complain that secular immigration judges don't understand the risks they face back home in Iran as converts.
Comments

Carl Anders Breitholtz8/3/2019 5:45 pm
The restaurant/former church have most likely changed owners since 2015, the Tax authorities in Visby have the records. If the new owners haven't done it already, I suggest they contact 1) Riksantikvarieämbetet in Stockholm so the ruins of the orthodox church can be preserved, and 2) the Orthodox church in Moskau when it comes to the reburial of the priest in a proper Orthodox Christian way. By the way, there are many other remains of an Orthodox Christian Sweden before the shism with Rome in 1054.
×