A Clergy Family in Great Need

We would like to post on our site a plea from Rod Dreher, Orthodox blogger at The American Conservative, concerning the current pressing need of his priest Fr. Matthew Harrington and his family, as his wife faces a dangerous and costly surgery for the birth of their fourth child. Please consider contributing as you can, through prayer and donations. 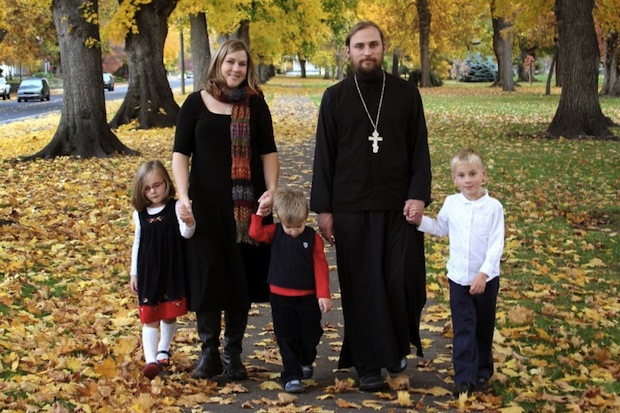 If you’ve been following this blog for the past two or three years, or if you’ve read How Dante Can Save Your Life, you will have read about my priest, Father Matthew Harrington. As pastor of St. John the Theologian Orthodox Mission, he’s a terrific priest, and helped me tremendously through my own spiritual and emotional struggles, as I recount in the book. Here’s an excerpt from How Dante telling you a little about who he is:

St. John the Theologian is Father Matthew’s first parish. When Father Seraphim Bell, a Walla Walla, Washington, priest who is Father Matthew’s own spiritual father, dispatched the newly ordained Matthew to us, he told me that the former police officer was a naturally gifted pastor “because he has suffered.”

After we had known each other a while, I asked Father Matthew what Father Seraphim had meant by that. I knew that Father Matthew had been raised by his grandparents and had never known his father. And I knew that he had been a police officer. One afternoon, sitting alone with him in the fellowship hall, I asked him to tell me his story.

“I was a very capable police officer, but I always felt like I was being punished for doing my job,” he said, squaring his shoulders under his black cassock. “I would arrest some city bigwig for drunk driving, and my boss would fuss at me. Why? It really aggravated a sense in me of deep mistrust of authority.

“And there were other things that are normal in police work but that started to get to me. I would think, ‘Why did that guy try to kill me? Why couldn’t I have saved that person?’ As I progressed in police work, I felt more and more of a sense of being orphaned. It all came out of self-pity, but those are real, hard emotions that being a cop coughed up.”

“Tell me about the breaking point,” I said.

“It was the second-to-last call I ever took,” he told me. “It was a little girl. She lived right by a big aqueduct, and fell in and drowned. I never saw her body, but by then I was so emotionally fragile that the pictures by themselves shook up me up pretty bad. She had on these pink sandals with flowers on them.

“That was a Saturday. The next morning, I went to liturgy, and in front of me was a little girl wearing the exact same shoes,” he continued. “I came undone. That was the end of my career. It really was. My wife knew. I knew. It was just how I navigated the exit.”

Father Matthew’s last deed as an active police officer was to chase two suspected thieves who were escaping on bicycles. They dropped their bikes and slipped away. Enraged by this, he took out his knife and cut their tires.

“Just like that,” Father Matthew said, shaking his head. “Then I realized that I had become what I was fighting. I couldn’t be a cop anymore. I talked to my chief and told him I couldn’t go on. I wasn’t a bad cop, and I wasn’t a malicious cop, but I was a suffering cop, and I needed out.”

Father Matthew and his wife, Anna, had discovered the Orthodox Church through the parish pastored by Father Seraphim. As the young police officer’s emotional life disintegrated under job pressure, the congregation held him up.

“What I thought was a strong wall cracked, and I fell apart,” the priest told me. “They didn’t judge me when they saw me bawling through vespers and liturgy, just bawling.”

Tall and stern, with a piercing gaze, Father Matthew is not the kind of man you imagine crying in public, if at all. Though he wears a cassock now (“my dress,” he snarks), this priest does not look like the sort of cleric fat-mouthing heretics would want to mess with.

“Yeah, I cried,” he said. “I was broken. I still am broken. I can’t watch war movies or anything like that. It’s a humbling experience to know that you’re in the prime of your life and you’re broken.”

Meeting Father Seraphim had made all the difference in his life. “He tells it like it is,” said Father Matthew. “He made me face myself, and all my pride and anger. Man, was I ever angry. Orthodoxy allowed me to come out of that.”

“Dante would call it a dark wood,” I said. “So is that why you became a priest?”

“I haven’t thought about it,” he said. “It was a response to the love I received from Christ through the Church. If anything, my time in the civil service showed me that the only way I could help people was to heal my own heart. I had to seek the fullness of life in Christ, to be able to see the divine light in anyone. Otherwise, all they’re getting is the blind leading the blind.”

Starting tomorrow, Father Matthew and his wife Anna are going to face the biggest challenge of their lives. Anna—the priest’s wife is called “Matushka,” meaning “little mother,” in the Russian Orthodox Church—will be admitted to the hospital for a high-risk, extremely complicated surgery, to give birth to their fourth child, a daughter they will name Irene. Theirs is a clergy family, one that serves a very small mission church. We in the congregation are giving all we can, but it won’t be remotely enough to meet all the medical needs of the Harringtons. Friends of the Harringtons outside our parish have set up a GoFundMe for those who would like to help them. From the GoFundMe site:

Due to complications with Anna’s pregnancy, Irene’s delivery will require her month-early arrival (July 21) by a complex surgical procedure. She will also be born with a special condition called hemifacial microsomia that includes pronounced spinal scoliosis.

Matushka Anna stopped working at the end of April due to these medical struggles. While the members of the Parish of Saint John the Theologian lovingly support Father Matthew financially in his priesthood , the Harrington family also depended on Matushka Anna’s income to fulfill their needs. The Harringtons are facing major financial hardship. Anna will not physically be able to work, and baby Irene will require her attentions full-time. Irene will likely need future surgical procedures and the attentions of specialists to care for the many possible complexities of her condition. This includes medical care and may include travel to major hospitals in other areas of the United States.

Matushka Anna’s condition is delicate in the sense that the procedure she will undergo is complicated and will require a week or so long hospital stay and her recovery will be longer than expected. The family has never been known for anything but grateful acceptance of even the most challenging situations, but these new tests have involved selling Matushka’s car, delaying almost all purchases, and belt-tightening to an extent which we, both friends and those who have been affected by Father, as well as those who appreciate voices of his variety, need to step up and do what we can.

I can vouch for the fact that the Harringtons lived a very modest life since they arrived to start our tiny mission church. Theirs has become much more modest since Mat. Anna had to quit her job. The family has the spiritual resources to face this challenge, but the financial aspect is going to be an enormity. I don’t post things like this often, but because Father Matthew’s work among our little congregation has touched many of you, via this blog and my Dante book, I thought you would like to know that the need for prayer and other forms of assistance is great with this family. Please do what you can. A Time For Miracles
Yuri Kishchuk
There is snow all around, and the alluring smell of oranges and sweets is in the air. Christmas and New Year are coming… People are thronging to the stores, buying gifts and food for themselves, their family and friends. In all this hustle-bustle not all remember that the Church is also preparing to meet its greatest winter festival, the Nativity of Christ. A Wonderful Family
This story was narrated by the mother of a Nun and it concerned her own family.
Comments