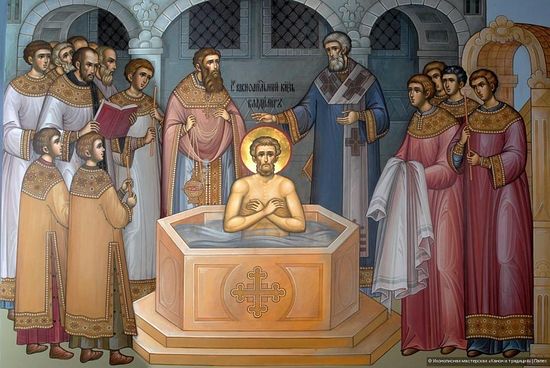 He was among the first of the All-Russian rulers to become a Christian, and originated the Christian form of government for Russia. From his time, the Russian sovereignty becomes Orthodox, and Christianity makes its way into all the spheres of social and civil life.

Did he act solely as a ruler, were his actions intended only for civil purposes? No, he showed himself to be a true Christian and preached Christ not only in word but by his personal example.

Having been reared as a pagan, Prince Vladimir, though he had heard of Christianity as a child from his grandmother, Blessed Grand Duchess Olga, he was still a zealous pagan. He earnestly fulfilled the pagan rites, tried to appease the gods, bringing them sacrifices for successes, because he was convinced that he served the truth.

When a Kievan mob killed the Viking St Feodor and his son Ioann, upon whom the lot fell to be brought into sacrifice to the idol Perun in gratitude for success in battle, Vladimir came to understand that he was in error. He sensed the abyss between moral law and the demands of paganism and his discerning soul felt the injustice. The search for truth led him to Orthodoxy, and, overcoming his internal and external obstacles, accepted holy baptism.

Now a Christian, he began to serve Christ even more zealously than he served the pagan gods. He brought his entire being and everything at his disposal in sacrifice to the Truth, for Christian teaching reveals Divine truth and expresses the loftiest moral law.

Vladimir changed after his christening. He preserved his own finest qualities while rejecting his sinful inclinations and habits. From the cruel man he was, not sparing even his own brother, who was killed in an internecine war for power, he became so soft-hearted that he did not even wish to execute criminals, employing that punishment only in rare circumstances, when it would prevent evil.

From a wayward son he became chaste, he abandoned his former wives and lived in honorable Christian matrimony with Queen Anna. From a predatory conqueror he became a peace-loving ruler. From a corrupt gatherer of taxes he became indifferent to the treasures of this world, ever prepared to give them away in exchange for the immaterial values. For his armed forces he became not so much a terrible leader brutally punishing the least of infractions, but a wise ruler, understanding the souls of his subjects and appreciating his fellows.

For his people, he became a loving father, tending to his many children, as he saw his subjects now, seeking to satisfy their needs.

He paid special attention to the helpless—the orphans, the widows, the crippled. He remembered them during his feasts and sent them wagons of food and other needed supplies.

His feasts were not raucous affairs but joyful, brotherly communion. In all aspects of life he showed himself a Christian, now Prince Vladimir the Beautiful Sun, both in his personal and family life, and in society and as head of state. Coming to know the truth, he served it with all his heart, spreading the light wherever he could. He was the personification of the teachings of Christ, serving as an example for others to emulate. That is why Orthodox spread so quickly and so deeply in Russian life. The Prince drew everyone’s attention with his own podvigi. He was the conqueror of himself, through this he ruled others, preaching Christ with his actions in every sphere of life. He served the true God as an individual, as the head of his household, as a commander, as a judge, as a ruler and monarch. He was always thereafter a servant of Truth, striving to see to it that it reigned everywhere.

The new spirit of wholeness and unity in all aspects of life and the manifestation of truth in everything St Vladimir exhibited in himself and he imparted it to the Russian people. He is their Illuminator and Baptizer, monarch and apostle, commander and teacher, unifier and preserver. His finest successors followed his lead, and it is no coincidence that it was on his feast day that the Battle of the Neva was won by Great Prince Alexander, in whom we see the spiritual image of his apostolic ancestor.

The service to God begun by St Vladimir on earth, continues even now at the Throne of the Almighty, before which he continues to pray for the Russian land which he illuminated and sanctified, and he shines with heavenly light, guiding the Russian people in Truth. Jacquelin A Bauer MS7/28/2018 8:00 am
And in this recount, we see and feel the beauty of the soul rise up. For goodness and fairness is taught by action received, provide ing the will to pass on, share, and grow consideration. May understanding be the law of the land.
×