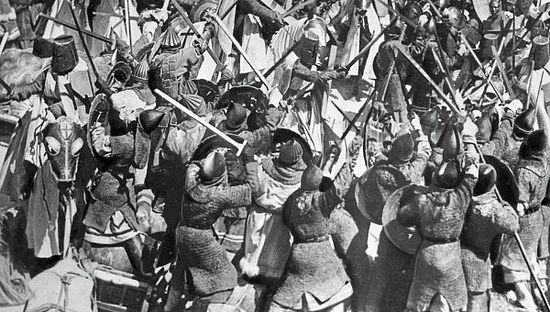 The great Soviet film, Alexander Nevsky, by the Soviet directors Sergei Eisenstein and Dmitry Vasiliev, recently restored by the Mosfilm cinema company, will be shown as part of the “Venetian Classics” retrospective competition program of the International Venice Film Festival, reports RIA-Novosti.

The annual Venice Festival will be held September 2-12, 2015. Last year at the “Venetian Classics” program Russia was represented by the restored film by Georgy Daneliya, “Walking the Streets of Moscow”.

“Embarking on the ‘Alexander Nevsky’ restoration, we thought that either the picture would take a very long time or there would be irremovable defects. The automatic cleaning yielded almost no results – there was much ‘noise’, a lot of movement throughout the film. All our restorers worked on this movie, and they cleaned practically every frame by hand,” the cinema company’s website cites the words of Mosfilm deputy director general Igor Bagdasarov.

According to him, despite all difficulties, the Mosfilm specialists managed to remove all imperfections “and the picture has been renewed at the highest quality.”

The first International Venice Film Festival (Mostra Internazionale d'Arte Cinematografica) was held in 1932 as part of the Venetian biannual festival.

Since 1934, the film festival has been held annually (its history was interrupted only twice: in 1943-45 and in the 1970s) in August-September on the island of Lido. It is one of the most authoritative festivals in the field of cinematographic art.

St. Alexander Yaroslavich Nevsky (c. 1220-1263) is venerated by the Russian Orthodox Church as “a holy right-believing prince”. In 2008 “Alexander Nevsky” became the winner of “The Name of Russia” Russian national television contest.