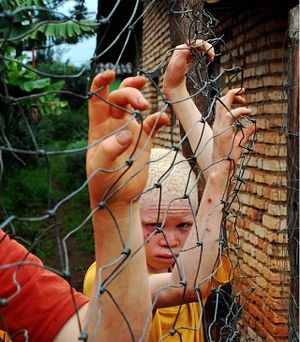 Themi Adamopolou, formerly the bass player of iconic 1960s rock group The Flies, became a missionary after a dramatic conversion to Christianity, but his latest journey - challenging the Ebola disease in Africa - is perhaps his most important act to date. The Ebola virus has killed at least 3,900 people in his adopted home of Sierra Leone.

Until recently, he refused to leave his Holy Orthodox mission in the country, preferring to stay at his post to help people protect themselves from the virus, rather than taking a much-needed break in Australia.

Father Themi has also taken on a new quest - offering support to white African albinos, who are outcasts in African society. He is taking care of group of albinos at his mission, demanding equal rights, jobs and scholarships, to help them fight discrimination.

Albinism is a congenital lack of the melanin pigment in the skin, eyes and hair which protects from the sun's ultraviolet. As well as social discrimination across Africa, albinos are vulnerable to medical complications

At its inaugural meeting recently, attended by more than 300 people, the Sierra Leone Albino Association (SLAA) said albinos in the West African country were "facing stigmatisation, marginalisation and harassment".

Since late-2007, more than 60 albinos, including children, have been killed, their limbs hacked off and sold to witch doctors who concoct charms their clients believe will make them rich and powerful. Indicative of the Sierra Leone government's poor record on the issue, it still has no records indicating how many albinos live in the country.

Amnesty International's Solomon Sogbandi said the formation of the SLAA was a vital step forward to "provide an enabling environment for their cause and act as a pressure group on government to ensure their social and human rights are enhanced".

When he heard of their plight, as ever, Father Themi couldn't stand aside.

"No, they are not Europeans visiting our mission in Sierra Leone, they are indigenous Sierra Leoneans who happen to be albinos," says Father Themi.

"Albinos not only suffer severe social isolation, discrimination and provocations, but also experience associated physical ailments - extreme skin sensitivity to the sun's rays leading to infections and even cancer. They may also be afflicted with low vision or blindness. In Tanzania they're actually hunted and killed for witchcraft purposes."

With the SLAA launched, Father Themi is finally on his way back to Australia, touching down on August 21. But the trip isn't simply a rest. With fundraising events for his projects in Sierra Leone taking place in Melbourne, Sydney and Brisbane, the work goes on.

* THEMI'S JOURNEY
Themistoclese Anthony Adamopoulo was born in 1945 in Alexandria, Egypt into a Greek family, but anticipating developments in Egypt at the time, his parents made the decision in 1956 to migrate to Melbourne.

Arriving in Australia before his teens, Themi attened Williamstown High School. Gifted academically, he won a scholarship to Melbourne University, where he began a Bachelor of Commerce Degree in 1964.

During the 1960s, Themi became a founding member of a rock band called The Flies, deferring his studies to pursue a career in the music industry and gaining intense local and interstate popularity.

After completing a Masters of Education, Themi went on to teach, but after reading the Gospels countless times, he sold everything he had, gave it to the poor and began a walk from Melbourne to Brisbane "seeking God's will".

Accepted into the Greek Orthodox Church, Father Themi took up theological studies in Australia before heading to the USA where he completed a Master of Theological Studies.

He returned to Australia, and in 1986 was one of the founding lecturers at St Andrew's Greek Orthodox Theological College in Sydney. His work in Africa began in Kenya in the mid- 1990s. Ebola Virus And The Orthodox Mission’s Challenge In Sierra Leone
The present West African epicentre of this non-curable killer infection is in Guinea (Sierra Leone’s northern and eastern border neighbour). Now it has started to spread beyond the Guinean borders.
Comments
×