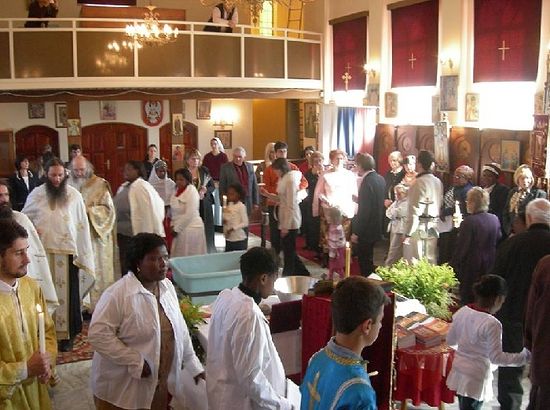 On June 4/17 eight people were baptised at St. Thomas’s Church by Father Pantelejmon (Jovanovic) with the blessing of His Eminence Metropolitan Seraphim, Archbishop of Johannesburg and Pretoria. They are Margaret Mphela of Klipfontein View, Midrand and her four children, Nina (Joyce) Aphane and her daughter Sophia (Sophie), and Margaret Mphela’s niece, Mary (Valencia) Semenya of Mamelodi.

When a group of people in Tembisa asked for Orthodox services to be held there in 2005, Margaret Mphela’s niece, Nektaria (Thabitha) Ramohlale of Mamelodi, who was already an Orthodox Christian, was staying with them in nearby Klipfontein View, and attended the services. Soon Margaret and her children were attending as well. Unfortunately most of the people at Tembisa dispersed for various reasons, leaving only Mrs. Rosina Thamaga, widow of the late Father Simon Thamaga. With the blessing of His Eminence Metropolitan Seraphim, we began holding services in Margaret Mphela’s house in Klipfontein View, and Margaret’s neighbour, Joyce Aphane and her daughter Sophia began attending as well.

The house was small, however, and again with the blessing of His Eminence Metropolitan Seraphim and Father Pantelejmon we began to take the people from Klipfontein View and Tembisa to the Divine Liturgy at St. Thomas’s Church, which was the closest Orthodox Church.

Now they have been baptised and are fully Orthodox. As Margaret Mphela remarked on the way home from the baptism service, “Now we are free,” for, as we sang during the service, “As many as have been baptised into Christ have put on Christ.” And it was good that during the baptism service we had three young people who had come from the USA to help to share the Orthodox Christian Faith in South Africa. They were Seraphima Carl, John Diamantis and Alex Goodwin. They, like many other visitors, and the baptism candidates themselves, found the baptism service most impressive, and a sign that the Orthodox Church in South Africa is growing. My Journey into The Ancient Church

My Journey into The Ancient Church
Jeremiah McKemy is an American convert to Orthodoxy from non-denominational churches, who has begun a blog to share with others his own journey. Here is his story.

Deacon Stephen Hayes8/12/2015 11:31 am
While I wrote the article, I think that your readers should be aware that the baptism took place in 2007, and not this year, and there is now a new bishop in the diocese (His Eminence Matropolitan Damaskinos) and a new priest in the parish (Father Isajlo). Also, it was not the first group baptism in the diocese, as several people had been baptised in other places in earlier years. But thank you for publishing this, and please do pray for those who were baptised,m and for those who are ministering to them now, as we are short of clergy in the Archdiocese of Johannesburg and Pretoria.
×