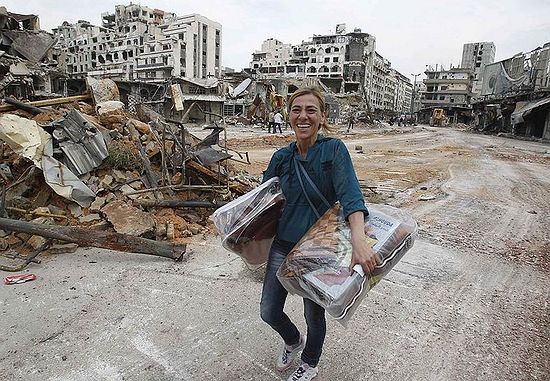 The scenes of destruction haven' t changed much since the rebels withdrew a year ago from the ancient part of Syria's Homs city, except for the heads that pop out of the windows and balconies observing the construction workers rebuilding some of what had been destroyed.

Hundreds of exhausted Syrian rebels withdrew from their last remaining strongholds in the heart of Homs in 2014 after two years of government-imposed siege. The residents of old Homs are gradually returning to their homes and personally partaking in rebuilding their neighborhoods which sustained a great deal of destruction.

Most of the returnees are Christian families who were waiting for the end of the crisis in Homs to return to their Christian quarter in Old Homs, namely to the districts of Bustan al-Diwan and Hamidiyeh, which are hugging other mixed neighborhoods in the old city.

Amid destruction, the white and colored laundry hanging on clothesline on some porches and balconies give the onlooker a sign that the house is inhabited.

"I have returned home since the city was liberated from the rebels. Debris and rubble as well as barriers, which were made of pieces of refrigerators and washing machines, were everywhere," Emad Husni, a school teacher in old Homs quarter, told Xinhua.

He said the civilians, and the local committees and municipality exerted efforts to clean the streets.

"Life is gradually returning to those shattered neighborhoods. Thank God, now we have electricity and water as well as phone lines and internet and all of the services that we want," he added.

Around 1,200 families returned to the districts of Old Homs, including 500 Christian families which returned to Bustan al-Diwan and Hamidiyeh.

People there say the church has played the main role in rebuilding the homes of the Christians who couldn't afford the reconstruction process and haven't received any compensation from the government.

"I'm from the National Anglican sect and the church has fixed and renovated my house to the best way possible and I have returned home," Ali Salim, a Syrian Christian from old Homs, told Xinhua.

Salim said he had felt the displacement when he was outside his house in the Hamidiyeh district even though he was staying at another house he owns in the predominantly-Christian town of Wadi al-Nadara in the countryside of Homs.

"This is my neighborhood and this is my country. I had stayed outside this neighborhood for three years and I felt as a stranger and as a displaced person even though I have another house outside Homs." Ghassan Bitar, another Syrian Christian, said the situation in Old Homs was "ugly," recounting how the church helped in changing the spectacle by fixing over 250 homes.

"In fact, the situation here was so ugly but now the good thing is the role the church has played in restoring a spirit to these shattered lanes. People have started returning to their homes and around 250 apartments were fixed and renewed. Houses were fully renovated. Electricity was restored and sanitation was fixed. Now, a school is being renovated as well," he recounted.

Cheerful street paintings have started mushrooming in the old city, lending the destruction scenes a light of hope, as some of them read: "Make peace not war" and "Welcome to old Homs."

Still, the upbeat mode of the Christian in Homs didn't stop the threats of the ultra-radical groups, which were once a party behind the destruction of their houses, from haunting them down, even though in other places.

This week, the Islamic State (IS) militants have snatched dozens of Syrian Christians, including women and children, in the town of Qaryateyn in the south eastern countryside of Homs.

Dozens of Christians were among 230 civilians, including 19 children, the IS captured in Qaryateyn, said the Syrian Observatory for Human Rights.

It said the kidnapping of the Christians were according to a list of names the IS militants had. A copy of the list were posted online with the names of the snatched Christians handwritten in red.

Other activists placed the number of the abducted Christians at 60, who are part of 100 families from the Syriac Christians in the town.

The IS militants stormed the town last Wednesday after carrying out several suicide car bombings at the outskirts of the town. Syria's Christians, who take up about 10 percent in the country' s Sunni-majority population, have suffered from the expansion of the ultra-radical groups in different part of the Syria.

The Christians showed support to the embattled President Bashar al-Assad whose administration has boasted itself as a defender of the minority groups in Syria, which consists of a remarkable melange of sects and beliefs.

Christians in Syria were quite well off and some even hold senior positions in the government. This might be one of the causes that have raised their concern over a possible government change.

It's common in Syria to see a mosque adjacent to a church not only in Christian neighborhoods but in every part of the country. Damascus still contains a considerable proportion of Christians, with churches all over the city but particularly in the district of Bab Touma.

Masses are held every Sunday and civil servants are given Sunday mornings off to allow them to attend churches, even though Sunday is a working day in Syria.

In late 2013, Gregory III Laham, Patriarch of the Church of Antioch and all East, told Xinhua that Syria's long-term crisis displaced more than 450,000 Christian Syrians and killed more than 1,000 of them. Five Syrian Patriarch address an appeal to Christians and Muslims living in Syria
Stating that extremism is capable of distorting any religion, Syrian Patriarchs – Orthodox, Catholic, and Non-Chalcedonian – have addressed their flocks, calling upon them to maintain closer ties with the Muslims who are struggling with islamist ideologies. In midst of Syrian war, giant Jesus statue arises
In the midst of a conflict rife with sectarianism, a giant bronze statue of Jesus has gone up on a Syrian mountain, apparently under cover of a truce among three factions in the country's civil war.
Comments
×