Speaking my truth is not hate 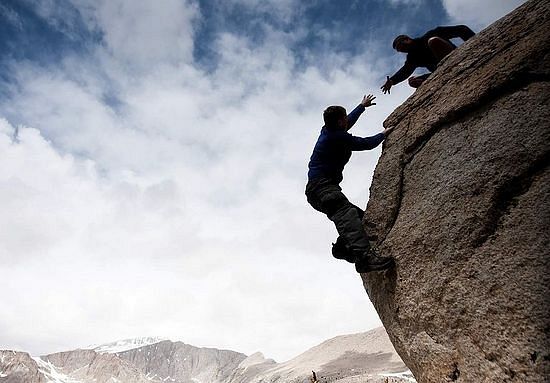 Philadelphia is one of the Greek words for love. As distinct from the eros we Americans prefer and idolize, philadelphia is devoid of sexual or romantic interest. It’s the brotherly affection between siblings, who support each other, and hold each other accountable.

With the recent court ruling on marriage, philadelphia becomes more risky for people of faith to offer their brothers and sisters who struggle with sexual passions (whether same or opposite sex — it doesn’t really matter). Our culture now considers this struggle pointless, and encouragement to resist eros is the epitome of ignorance, even hate.

If the Gospel presents a vision of health and wholeness, and departures from that vision cannot heal, then brotherly love compels the faithful to proclaim that healing, rather than the pseudo-love that merely affirms others’ right to do what they think will make them happy.

But the courts (and increasingly, society) embrace a new anthropology that says we’re defined by our passions — and denying them is suicide. This should concern people of faith at least as much as any questions of religious liberty: what a soul-destroying impact the redefinition of marriage, and this sexualized vision of humanity, will have on all who once were encouraged to resist what we’re now told to embrace — what we’re told defines us as persons.

Since opposing passions now means opposing the person who has them (or who is them), any voice of loving encouragement is now shouted down as hate. We’ve witnessed not only the redefinition of marriage, but the redefinition of love itself. In the new morality, love means affirming, accepting and celebrating others’ pursuit of sexual fulfillment. Counseling sobriety makes one hateful.

Which is all the more reason to remember why we speak: not out of hate, but out of brotherly love that won’t allow calling darkness light, because our and our brothers’ healing is on the line.

St. Silouan of Athos said, “Our brother is our life.” That means taking responsibility for him, rather than simply affirming him on his treacherous path. What those struggling with passions need as they stand on the edge of a precipice, isn’t the encouragement to jump.

Two of my friends who’ve long struggled with same-sex eros are now under great pressure to feel “liberated,” and succumb to it. Followers of the Gospel owe it to them and others to brave the accusations of hate (which come from the same source who told Eve that God was holding out on her, by not giving her the fruit in Paradise) — and encourage a path to wholeness.

Such encouragement will be increasingly risky, as our culture claims liberation from the outmoded concept of sin, yet becomes more miserable the freer it gets. May Christians not be silenced by fear of ridicule, nor let false accusations of hate prevent them from speaking the truth about eros .

icxcnika8/25/2015 3:24 am
In addition, the greek word is not philadelphia, but filia. Philadelphia is a compound word. Good article, but it is probably best to stick with English if unsure.

Seraphim`8/21/2015 9:39 am
Great piece. Only I would offer that it's not "my" truth, but "THE" Truth I believe we have to focus on. The "My" truth is actually the watchword of this "everything goes" movement with regards to sexuality. Thanks, Father, I loved your thoughts!