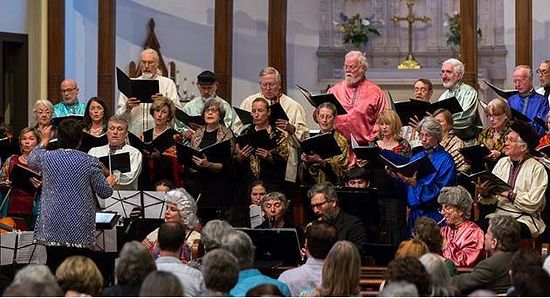 The Slavyanka Russian Chorus in a previous performance at St. Mark's Episcopal Church.

As waitlisted hopefuls and ticket holders alike gathered last Friday evening at the entrance of St. Mark’s Episcopal Church in Palo Alto, they were invited in by the ringing of genuine Russian church bells. The ringing marked the beginning and closing of Bay Area Russian choral ensemble Slavyanka’s performance of Rachmaninoff’s “All-Night Vigil,” Op. 37. As the almost 100 singers took their places, the bells — also used during intermission and between movements — gave the performance somewhat the character of an actual religious service.

The Friday, August 21, concert by the group was one of three performances last weekend — with the other two taking place in San Francisco and Berkeley — to celebrate the timeless masterpiece’s 100th anniversary. Sergei Rachmaninoff (1873-1943) wrote his stark composition for unaccompanied chorus (also erroneously known as simply “Vespers”), in just two weeks in early 1915.

It is generally considered as one of the finest accomplishments of a period of renewed interest in traditional choral music and liturgical chant, starting in the 1880s, when dozens of Russian composers applied themselves to composing choral music on texts from the Russian Orthodox liturgy.

Slavyanka normally consists of 40 men and women, but for the occasion was more than doubled in size, supplemented with about 60 additional singers, who commuted to rehearsals from as far away as Carmel, Santa Rosa, and Walnut Creek. There were even reinforcements from Boston, where Slavyanka’s Artistic Director Irina Shachneva was musically active for the 20 years before she came to the Bay Area.

Merging an existing choir with a large number of guest singers into a single, unified ensemble is an arduous and time-consuming task. There is a degree of finesse and inner cohesion that an ensemble can only reach with time and repetition, but the tremendous unity that Irina Shachneva managed to create among her singers was a clear indication of how effectively she was able to overcome most of the disadvantages of what was no doubt limited rehearsal time.

The admirable quality of the ensemble was especially evident when the chorus could sing at forte and fortissimo-level, as in “Khvalite imya Gospodne” (Praise the Name of the Lord) where “Slavyanka-plus” sounded robust, well balanced, and rhythmically together.

This level of consistent accuracy was less prevalent throughout softer passages. Some of these did not exude as much confidence and purpose as for instance the magnificent ending of “Bogoroditse Devo” (Rejoice, O Virgin), right before intermission, with its long, flowing melody and smooth choral texture in which the women’s voices stood out particularly well.

Alexander Frank was a slightly timid but otherwise clear tenor soloist with a lengthy solo in “Nïne otpushchayeshi” (Lord, Now Lettest Thou). Impressive and splendid were also bass Gene Krassovsky as Deacon and bass-baritone Nikolai Massenkoff, who sang the part of the Priest.

Slavyanka’s “Vigil” was bookended by a fitting, bell-inspired choral meditation by Soviet neoromantic composer Georgy Sviridov (1915-1998) to open the performance, and a concluding movement from Rachmaninoff’s only other religious composition for unaccompanied choir, The Divine Liturgy of St John Chrysostom, Op. 31, further blurring the line between concert and service.