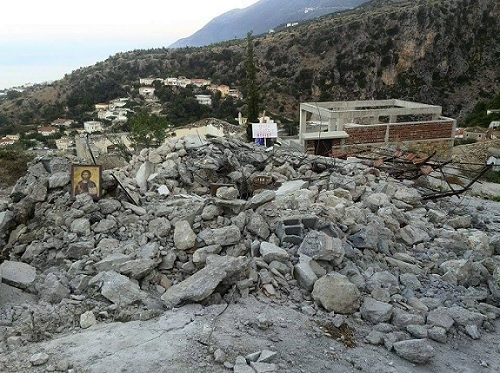 On August 26, 2015 at around 4 o’clock in the morning construction forces attacked and destroyed the church of St. Athanasius in Dhermi in Himara, which had recently been twice vandalized, reported the press office of the Albanian Orthodox Church.

The destruction crew gave no notice and did not allow the parish faithful to remove the sacred objects before they flattened the parish. Parishioners responded that they felt dejected and offended to see the Holy Gospel, icons and other sacred objects buried under the rubble. 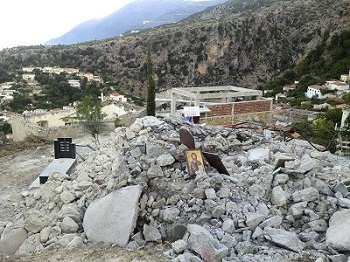 As were the previous acts of vandalism at St. Athanasius, this action is a flagrant violation of Albanian Law no. 10057, 22.01.2008, “On the ratification of the Agreement between the Government of the Republic of Albania and the Orthodox Church of Albania” which recognizes the sanctity of buildings used for Orthodox worship and prohibits state intervention, promising the protection of religious objects. Those who planned the destruction of the temple had made various incorrect claims about the history and legal ownership of the parish building in order to justify their actions. Hierarchical representatives have demanded an explanation from local authorities.

Such actions endanger the peaceful coexistence of different religious communities towards which the Albanian Orthodox Church works and provokes and distorts the image of the Albanian people and nation. Albania, Greece Row Over Village Church
Athens criticised Tirana after a police attempt to remove an alleged illegal construction at a village church rekindled rivalry between the Catholic and Greek-backed Orthodox churches in Albania. Dr. Jeanne Smith9/5/2015 7:49 pm
I am heartsick when I see pictures like this of churches destroyed in Albania. Sometimes God is the only thing that keeps us all alive. Please, please, let us respect others' rights to their religion. Religion is at the heart of who we are as human beings. Thank you.
×