Do Orthodox Christians Believe in the Atonement? 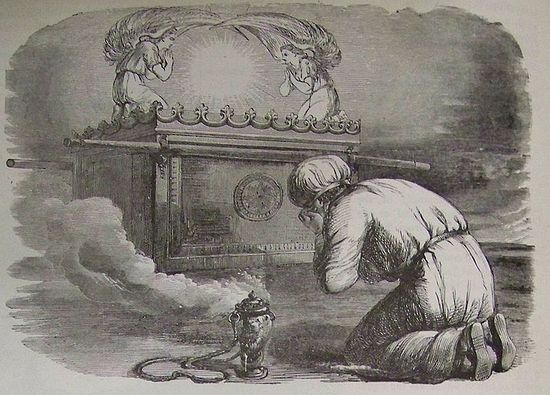 The Mercy Seat, illustration from the 1890 Holman Bible

The concept of atonement is found throughout Scripture, and so of course we Orthodox do believe in it. There was in fact a feast in the Old Testament called " The Day of Atonement," which in Hebrew is called Yom Kippur. This was the only fast day specifically called for in the Law of Moses, and was "a most holy sabbath [Shabbat Shabbaton]" (Leviticus 16:31). This is the fast that was alluded to in Acts 27:9, which states that "sailing was now dangerous, because the fast was now already past..."

The English word "atonement" was coined by William Tyndale, and means "to make one" or literally "at one-ment" (taking the two words "at" and "one" and adding the suffix "-ment." This well translated the meaning of the Hebrew word "Kippur," which means "reconciliation" -- specifically reconciling sinful men with a Holy God.

Another term which William Tyndale brought into English is "Mercy Seat". William Tyndale based his translation on Luther's translation into German: "Gnadenstuhl," which literally means the seat of grace or mercy. However, there is nothing in the Hebrew term, Kapporet, which suggests "mercy" or "seat." "Kapporet" is a form of the word "Kippur", and literally means "the place of reconciliation". This was the lid of the Ark of the Covenant, and the Mercy Seat was the place upon which the blood of the sacrifice on the day of Atonement was sprinkled, and by which reconciliation between God and men was brought about. The Greek translation for Mercy Seat was "ἱλαστήριον, hilasterion." And we find this word used in Romans 3:24-25: "Being justified freely by his grace through the redemption that is in Christ Jesus: Whom God hath set forth to be a propitiation through faith in his blood, to declare his righteousness for the remission of sins that are past, through the forbearance of God." Interestingly we find in that text the word "redemption", which could be translated as "ransom", and the Hebrew word for "ransom" (Koper) is from the same root word as Kippur -- a word used in reference to the Old Testament sacrifices, and which clearly has the connotation of "payment."

Church Tradition directly connects the Cross wih the Ark of the Covenant, because the Ark and the Mercy Seat was the place of atonement, and the Ark is referred to as "the place where His feet have stood" (Psalm 131:7 lxx) and the Cross is the place were Christ's feet stood, when he made atonement for our sins (see Christopher Veniamin, trans. Saint Gregory Palamas: The Homilies (Waymart, PA: Mount Thabor Publishing, 2009) p. 86).

There are many contemporary Orthodox writers who wish to deny or downplay a number of concepts that relate to our redemption. They will argue we don't believe Christ had to die in our place, or that His blood needed to be shed to pay the penalty for our sins. They will deny the legitimacy of legal terms, in favor of the idea that the Church is a spiritual hospital. The problem is not that the Church is not a spiritual hospital, but rather that in emphasizing one set of images used to explain our salvation, they deny a whole set of equally valid images that are clearly Biblical. It is true that in the west there was an over emphasis on legal imagery, but the solution to such an imbalance is not a new imbalance in the opposite direction. We can and should speak of sin as an illness, but when we die, we do not go before the final medical exam -- we face the final judgment, which is a legal image if ever there was one. And so we can also speak of sin as a transgression of the Law of God, and of our need to be justified by God, even as we speak of sin in terms of an illness that we need to be healed of.

We reject the idea that Christ's death was a ransom paid to the devil, but that it was a ransom in some sense is confirmed by the Lord Himself, and elsewhere in Scripture (Matthew 20:28; Mark 10:45; 1 Timothy 2:6). So we simply have to understand that verbal images point to a reality, but are not the reality itself, and we get a better idea of that reality by considering all the Biblical images that point to it -- not by focusing on one or two to the exclusion of the rest, and certainly not by pressing those images beyond the point that they are intended to make.

St. Gregory Palamas, in his Sixteenth Homily (delivered on Holy Saturday: "About the Dispensation According to the flesh of our Lord Jesus Christ and the Gifts of Grace Granted to Those Who Truly Believe in Him"), speaks quite a bit about the need for Christ to die in our place. The entire homily is well worth reading, but here are some excerpts:

As is often the case, the proper Orthodox perspective on this question is one of balance. We should proclaim the whole counsel of God (Acts 20:27), and not just the parts that we find most appealing. Nor should we overreact to the imbalances of heterodox theologians, and thus fall into a new error, by rejecting important aspects of our Tradition. Our Conciliar Salvation
Fr. Stephen Freeman
I consider it both a strange mystery and a settled matter of the faith that God prefers not to do things alone. Repeatedly, He acts in a manner that involves the actions of others when, it would seem, He could have acted alone. Forgiving Our Way into Salvation
Gabe Martini
By pondering our participation in Christ’s life throughout the year—and especially through the season of Great Lent—we can better understand its purpose.
Comments

Maged M1/27/2018 8:56 am
Thanks for the balanced article. Here is also patristic research that confirms the same: http://myagpeya.com/blog/soteriology/

Anonymous8/21/2017 8:26 pm
Wow. I am a convert to Orthodoxy, and yes, the priest where I converted did tell me that Orthodox don't believe that Jesus actually had to die on the cross in order for us to be saved - that salvation could have happened another way, but that God chose to allow that way in order to show how much He loves us. Maybe I emphasized the first part too much in my mind - but I really came away with the idea that Jesus di did not actually HAVE to be crucified for our salvation. I think I have gained a deeper appreciation for Jesus sacrifice and what it means to take communion, what it means to keep sinning - and also how much of it is I simply do not understand because it is too much of a mystery for me. Thank you for this article! If I can keep gaining greater and greater understanding similar to this, I will feel more and more intimately connected to Jesus - this article has helped me suddenly feel more intimately connected than before, I need to keep meditating on this. Thank you and pray for me!

Nicole6/23/2017 1:59 am
The difference in the atonement as I have understood it is that the atonement is always available to us, but that by sinning we reject it. Thus, we need to rely on God more and more to help us stop sinning so that ewe become receptive to reconciliation with God.

Richard Mohr6/22/2017 8:16 pm
I am a convert to the Eastern Orthodox Church. When I was an Evangelical I earned an Master of Divinity degree from Fuller Theological Seminary. While there I did an independent study on the word in Romans 3:25.

The issue was how to translate this word - expiation, propitiation, mercy seat, atonement, or something else. I did the exegesis, read how the word was used elsewhere but looking at any commentary by the Church Fathers was never suggested. We didn't do things that way. The whole context of atonement was a legalistic one. I also learned that the English word "atonement" is unusual because the noun "atonement" apparently came into existence before the verb "atone."

I understand our emphasis on the Church being a place where we sick people get well but appreciate Fr. John's point that when the end comes we don't go for a medical exam.

Ben Marston4/30/2016 1:24 am
Fr. John,
Thanks again for this article. Yes, the balance. I have found such comfort that Christ's death was the propitiation of my sin and sins, expiating my guilt thereby. I prayed for an insight into expiation. One day at work I bought a coconut water and was drinking it; while I was away another employee drank it by mistake. When I discovered their mistake, I immediately forgave the offending person and that included their offer to pay for the drink. However, the offending person said "I know that you forgive me, but I don't feel right." On the basis of that, I allowed them to pay for their offense, to expiate their sense of wrong-doing. To me, this illustrated there is something in human nature that is in need of expiation, is served by the expiatory act of Christ our God. Glory to Him who is our propiation!

Those who abandon all legal metaphors for the work of Christ approach perilously close to rejecting the God of the Old Testament for an exclusive devotion to that of the New. This approaches the Marcionite heresy. Also it tends to posit a salvation that is Monophysite in that it denies the humanity of our salvation, including the legal dimension to our lives. It goes further in saying that hell is not a place, but only an ontological experience of our inability to receive God's love. But as creatures with bodies it is both. It is both an inner state of our souls and an outer punishment in a place for our bodies.

Russell Service9/1/2015 2:41 pm
Thank you very much for this well balanced article. I really enjoyed your insight on why some clergy don't teach often on the Atonement due the Protestant Reformers overreaction to prior abuses by Roman Catholics. I'm a Roman Catholic who converted from Evangelical Protestantism. I have noticed that both of those faith communities don't often teach the whole truth about Redemption. When I read an article like yours I find it quite inspiring due to your conviction to teach on the whole truth. Thank you and keep up the good work.
×