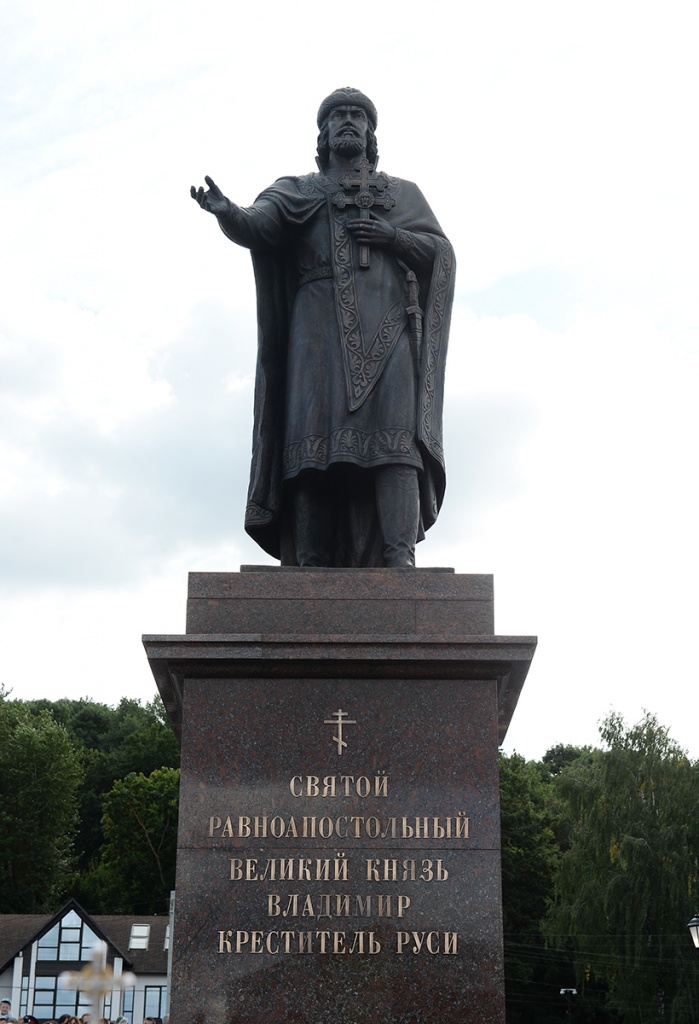 The Patriarch of Moscow and All Russia Kirill consecrated a statue of Kievan Prince Vladimir in Smolensk in western Russia on Sunday.

The statue, which now adorns the picturesque embankment of the Dnieper River, reminds Smolensk residents of the year 990 when the local population was baptized by Prince Vladimir, which is evidenced by historical chronicles.

The ceremony of unveiling of the statue was attended by Russian Presidential Plenipotentiary Envoy to the Central Federal District Alexander Beglov and acting head of the Smolensk Region Alexei Ostrovsky.

The monument is a 4-meter bronze statue mounted on a 5-meter base. Prince Vladimir of Kievan Rus who presses an Orthodox cross to his chest overlooks the Dnieper River. With his right hand, the Prince points to the river in whose waters Smolensk residents were baptized. The statue was made by member of the Russian Artists’ Union, Smolensk resident Valery Grashchenkov. His project was endorsed personally by Patriarch Kirill.

The Monument to Prince Vladimir in Moscow

Another monument to Prince Vladimir is set to be opened in Moscow. However, heated debates have erupted over the place of the statue’s location.

The Moscow city authorities have announced plans to unveil the Prince Vladimir monument on the bank of the Moskva river on November 4, when Russia marks People’s Unity Day.

The 25-metre statue featuring the Prince with an Orthodox cross in his hands was supposed to overlook Moscow from Sparrow Hills, the capital’s highest point, with its back to one of the famous Stalin skyscrapers, Moscow State University.

However, the Russian Military-Historical Society urged the Moscow authorities to find a different location for the statue, commemorating 1,000 years since Prince Vladimir’s death.

The society said that plans to unveil the statue on Sparrow Hills “raised public concerns” and could be dangerous as the land in this area was unstable.

More than 50,000 Muscovites signed an online petition against the statue’s construction, fearing the 330-ton monument could slide down the hill, a popular tourist site.

Meanwhile, over one-third of Muscovites have voted that the huge statue of Prince Vladimir of Kiev should be unveiled in a square next to the Kremlin, according to information earlier posted on the Active Citizen project’s website.

“A total of 34.67% [of Muscovites] voted for Borovitskaya Square,” the statement said.

Lubyanka Square, the former home of a famous statue of Bolshevik revolutionary “Iron” Felix Dzerzhinsky, got 32.12% of the votes. Cross procession of over 20,000 participants walked through Kiev