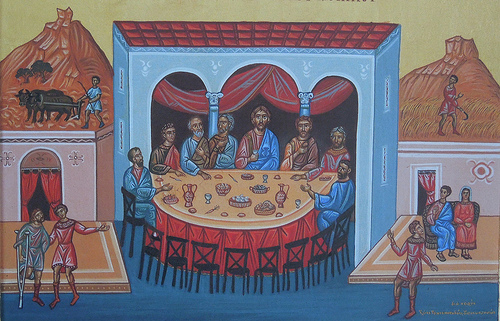 And Jesus answered and spoke to them again by parables and said:

The kingdom of heaven is like a certain king who arranged a marriage for his son, and sent out his servants to call those who were invited to the wedding; and they were not willing to come. Again, he sent out other servants, saying, "Tell those who are invited, See, I have prepared my dinner; my oxen and fatted cattle are killed, and all things are ready. Come to the wedding.” But they made light of it and went their ways, one to his own farm, another to his business. And the rest seized his servants, treated them spitefully, and killed them.

But when the king heard about it, he was furious. And he sent out his armies, destroyed those murderers, and burned up their city. Then he said to his servants, "The wedding is ready, but those who were invited were not worthy. Therefore go into the highways, and as many as you find, invite to the wedding." So those servants went out into the highways and gathered together all whom they found, both bad and good. And the wedding hall was filled with guests.

But when the king came in to see the guests, he saw a man there who did not have on a wedding garment. So he said to him, "Friend, how did you come in here without a wedding garment?" And he was speechless. Then the king said to the servants, "Bind him hand and foot, take him away, and cast him into outer darkness; there will be weeping and gnashing of teeth." For many are called, but few are chosen.

The Lord finished this whole majestic, prophetic parable with the words: "For many are called, but few are chosen.’"These words apply to both Jews and Christians. There were few chosen among the Jews, and there are few among the Christians. All we who are baptized are called to the King’s table, but God alone knows whom He has chosen. Woe to those of us to whom the Most High, the King, shall say before all the angels and saints: "Friend, how can you come not having a wedding garment?’"What shame, what unavailing shame! What ruin, what irretrievable ruin! God in the very truth speaks these words to us now, every time we approach the holy altar to receive Communion, to unite ourselves in spirit with Christ the Bridegroom: "Friend, how can you come not having a wedding garment?"

Let us hearken with heart and conscious when we approach the holy chalice, and we shall hear this questions and this reprimand. Oh, that these words of God’s may not bring with them weeping and gnashing of teeth in the final darkness that will descend when God says this to us for the last time! Who of us can guarantee that God will not speak these words to us today for the last time in this earthly life? Who can guarantee that his soul will not be found this very night in the resplendent heavenly assembly around the King’s table, wearing the filthy garment of sin? What mortal man can know that today is not a day fateful to him for all of eternity?

A few moments were decisive in the destinies of the two robbers on the cross. One of them was incapable of making use of these few moments, and went off into ultimate darkness, while the other used these few moments wisely: he repented, acknowledges the Son of God and asked Him for salvation: "Remember me when You come into Your Kingdom’"(Luke 23:42). At that moment the old garment of sin fell from his soul, and it was clothed in a resplendent wedding garment. The repentant thief, with the dignity of one of the chosen, appeared in Paradise at the King’s table (Homilies, pp 296-297). Guarding the Chalice
Nathan Duffy
When a faith is highly traditional—so traditional that her Tradition is seen as nothing less than the presence of God living and breathing in the life of the Church—it is sure to clash with the sensibilities of a modern, critical, and pluralistic culture such as our own.One of the many sources of friction between the Orthodox Church and contemporary culture is in the exercise of authority. On Preparation for Holy Communion. “We must raise the standard”
Bishop Pachomy (Bruskov), Anastasia Rahlina

On Preparation for Holy Communion. “We must raise the standard”
Anastasia Rahlina, Bishop Pachomy (Bruskov)
As the Lord said in the Gosples, He that is able to receive it, let him receive it (Mt. 19:12): one person may be capable of living an intense inner life, regularly go to church, and continually search his own conscience—as St. Ignatius (Brianchaninov) says, so that their minds would always swim in the Gospels, in the teachings of Christ. Another person might be so inwardly disposed that it is an ascetic labor for him to receive Communion only twice a year.
Comments