On September 3/16 the Orthodox Church keeps the memories of two Holy Fools, or Fools-for-Christ, Blessed John “the Hairy,” fool-for-Christ, of Rostov (1580), and Priest Peter, fool-for-Christ, of Uglich (1866). The phenomenon of Holy Fools can be one hard to understand—it is a very particular calling and certainly only for the few. Fools-for-Christ shun all worldly praise and conventional behavior in order to give themselves over entirely to the will of God, and often for the purpose of revealing the word and will of God to those around them.

Belowe we offer more information on the idea of Holy Fools, followed by the life of Blessed John "the Hairy," celebrated today. 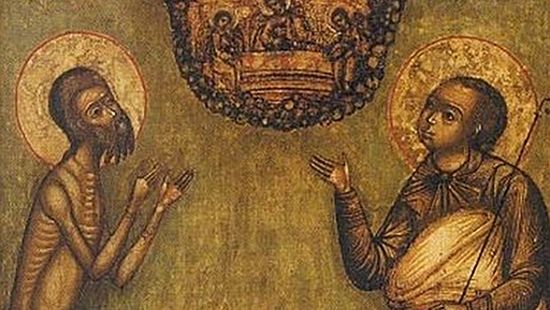 If any one among you thinks that he is wise in this age, let him become a fool that he may become wise. For the wisdom of this world is folly with God (1 Cor 3:18-19).

For most of us, St. Paul’s words are reminders to focus on God’s love, mercy and glory, and to put submission to His will ahead of the transient things of the world. But some devout followers have taken his advice further, and become what we call “Fools for Christ.” What are they, and how do they function? Are they really just pretending to be foolish, or are these people truly mentally ill?

Holy fools have existed for centuries, even before our faith began. Some of the Old Testament prophets are seen as forerunners of the Holy Fool: Isaiah walked naked and barefoot for three years, Ezekiel lay before a stone and ate bread baked on cow dung. Hosea married a harlot. They performed these strange and unsavoury acts to highlight Israel’s infidelity to God, warning His people of what was in store for them if they didn’t repent and turn back to Him. In ancient Greece, the Cynics were similar to our holy fools—they believed in a simple life and rejected the values of the day—riches, greed and immorality were their particular targets. Perhaps the most famous Cynic is Diogenes, who, among other things, carried a lit lamp around with him, searching, he said, for an honest man. He slept in a tub and is said to have eaten raw meat.

In our faith, Holy Fools often serve the same purpose as their Old Testament counterparts: that is, to warn a city, or a parish or a monastery about their failings and turning away from God. But their behaviour often isn’t just that simple, and to be a Holy Fool is a difficult and dangerous calling. It requires someone to reject the values of the world, and sometimes, even to seem to reject the teachings of the church. They forfeit the acceptance of others, and they act in ways that often convince people they are insane. It’s not unusual for holy fools to spend time locked up in madhouses and asylums, or to find themselves mocked, beaten, and thrown out of churches and monasteries. It’s not a way of life most people can tolerate or understand, either to do it or to be around it.

Some of the fools for Christ are in fact “faking it.” They act the way they do because they want to keep their humility and extreme piety a secret from everyone but their spiritual fathers. St. Isadora, of the Tabenna monastery, is one of the earliest examples of a fool for Christ who was more than likely faking mental illness. For the sake of humility, she wore a dishrag on her head, undertook the dirtiest and least rewarding jobs in the monastery, drank dirty dishwater and endured with meekness, humility, and silence the contempt and disdain of her sisters. Her cover was blown when a monk showed up one day at the monastery, demanding to see her and claiming God had shown her to him in a vision. Once they discovered how truly holy she was, she left the monastery and disappeared from history. St. Alexander of Constantinople is another example—he feigned madness with everyone but his spiritual advisor and disciple, and suffered greatly because of it.

It’s unclear with other fools for Christ if they are in fact, sane, or if they are suffering from some form of mental illness or a breakdown that enables them to draw closer to God and become living saints. St. Xenia of St. Petersburg is perhaps one such—she was so grief-stricken on the death of her husband that she gave all her possessions away, wore his clothing, and adopted his name. She wandered the streets of St. Petersburg and spent the nights in a field outside of town. Was she mentally ill, or was she faking it to convince others, and distract them from her piety and humility? We’ll never know, although it might be that she began her podvig out of a grief that unbalanced her. St. Feofil is another example, whose madness seemed at times calculated, as when he behaved badly in order to be released from an obedience he hated, and at times an illness, as when he kept his cell full of mess and dirt and food, or he blew his nose on the altar cloths and stood with his back to the altar.

“Ostrov (The Island)” is a film about a fool for Christ, available on Netflix, or from Amazon. It’s worth a viewing to get an idea of the calling of Holy Fool.

There are undoubtedly others who have never come to light, simply because they were so good at feigning madness, or who were truly ill, that they were locked away and are known only to God. But they are a necessary and vital part of the church, both to show us our faults as individuals and as the Body of Christ, and to demonstrate an amazing humility and piousness to us. 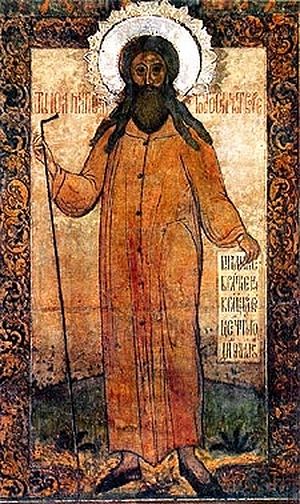 Living in humility, patience and unceasing prayer, he spiritually nourished many people, among them St Irenarchus, Hermit of Rostov (January 13). After a long life of pursuing asceticism, he died on September 3, 1580 and was buried, according to his final wishes, beside the church of St. Blaise beyond the altar.