The Miraculous Relics of St. Joasaph of Belgorod

On September 4/17 the Church commemorates the uncovering of the miraculous relics of St. Joasaph of Belgorod in 1911. Below is a miracle worked by his wondrous relics, as recorded in the book Contemporary Cases of Miraculous Help, translated from Russian by Tatiana Pavlova and Natalia Semyanko. 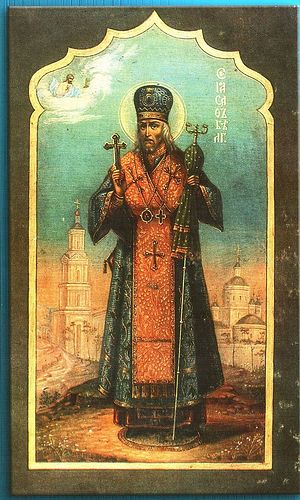 At the time I was studying at St. Petersburg Theological Academy. I had much knowledge, but no real faith. There were ceremonies associated with the opening of the relics of St. Joasaph and I attended them unwillingly, thinking about the tremendous crowds of people thirsting for a miracle. How could miracles happen these days?

I came there and something moved inside of me: I saw something to which one could not remain indifferent. There were sick people and cripples from all over Russia—there was so much suffering and pain that it was hard to look at. Moreover, the universal expectation of something miraculous was conveying itself to me, in spite of my skepticism towards the forthcoming ceremony.

Finally the Emperor came with the Family and the celebration began. By this time, I stood with profound anxiety: I did not believe and still, I waited for something to happen. Now, it is hard to imagine that sight: thousands and thousands of sick, bent, crippled, possessed, and blind people stood and lay on both sides of the road, along which the saint’s relics were to be carried. One cripple in particular drew my attention: he could not be observed without a shudder. All his body parts had grown together—he was like some kind of ball of flesh and bones on the ground. I waited: what could happen to that man? What could help him?

Then the coffin with the relics of St. Joasaph was brought out. I never saw and will probably never see anything like it again—almost all the sick, standing and lying across the road, were cured: the blind began to see, the deaf—to hear, the mute began to talk, to cry and jump for joy, the cripples’ body parts stretched and healed. I looked at all that was happening with horror, trembling and reverence—and did not let that particular cripple out of my sight. When the coffin with the relics reached him, he separated his arms—a terrible crunching of his bones was heard, as if something was tearing and breaking inside of him, he started to rise to his feet with an effort—and finally stood up. What a shock I experienced! I ran up to him with tears in my eyes, then caught some journalist by the hand, begged him to write that down…

I returned to Petersburg as another person—a believer. Saint Joasaph of Belgorod
So great were the labors of St. Joasaph that he soon became known to Empress Elizabeth I, who summoned him to court and listened to his homilies with great attention, later calling him to hierarchal service. In 1748 St. Joasaph was consecrated bishop of Belgorod and Oboyan. From that moment and until the end of his days, the saint was quite literally a good shepherd of his flock and knew each sheep by name.

St. Joasaph of Belgorod, in Verse and Song
L. N. Pogozheva
The Queen of Heaven is particularly close to children who call upon her. She loves and helps them. Once the father of the holy Russian hierarch Joasaph of Belgorod was sitting on his porch at sunset pondering on what awaited his son when he grew up and finished his studies. Suddenly he saw the Mother of God in the air and his son on his knees, praying at Her feet. Then he heard her say to Joasaph, "Your prayer is enough for me," and from the heights an angel flew down and cloaked the youth in a bishop's mantle.
Comments

Baby Varghese9/23/2015 12:29 pm
I heard about St.Joasaph for the first time.I seek the saint's intercession for healing of my various ailments,including the chest pain,which is latest.
×