On September 16, 2015, His Eminence Archbishop Demetrios released an encyclical regarding the sixtieth anniversary of the riots in Constantinople which resulted in great damange to Orthodox Church properties, as well as the looting and destruction of Christian homes and businesses. In commemoration he calls for all parishes of the Greek Orthodox Archdiocese to serve memorial servicse today, Sunday, September 20, 2015. 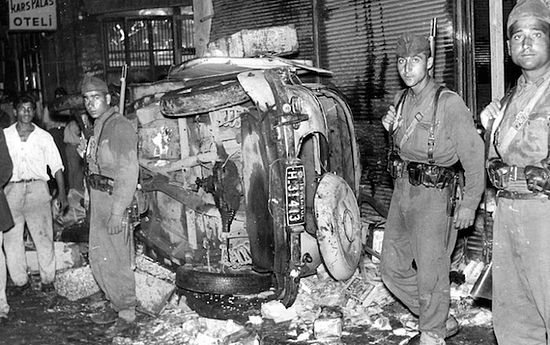 Commemoration of the Asia Minor Catastrophe

To the Most Reverend Hierarchs, the Reverend Priests and Deacons, the Monks and Nuns, the Presidents and Members of the Parish Councils of the Greek Orthodox Communities, the Distinguished Archons of the Ecumenical Patriarchate, the Day, Afternoon, and Church Schools, the Philoptochos Sisterhoods, the Youth, the Hellenic Organizations, and the entire Greek Orthodox Family in America

Beloved Brothers and Sisters in Christ,

We are confronted on a daily basis with the tragedy of conflict in our world, the struggles and suffering of refugees, and the violence and death associated with terrorism and genocide. We see and hear reports of the tremendous challenges faced by people who are being expelled from their homes and countries, who are seeking basic provisions and security, and who are in need of hope and comfort.

As Greek Orthodox Christians, we are very aware of these challenges, and we are called in the love of God to respond to these great needs. We also offer our prayers and support in our remembrance of the great tragedies that have befallen our forbearers. This month marks the anniversary of two periods of intense persecution, suffering, and loss of life and property by Greeks in Asia Minor.

This month is the sixtieth anniversary of the riots in Constantinople in 1955 which resulted in the damage, destruction, and looting of thousands of Greek businesses and homes and scores of churches, monasteries and schools. People were killed or injured, cemeteries were desecrated, and crosses were vandalized. Almost every Greek Orthodox Church property was targeted, including the Patriarchal cemetery and Balukli, where sepulchers and vaults were violated. This orchestrated act of violence and terrorism caused great injury to the Greek people in Constantinople and surrounding areas, and resulted in tens of thousands of Greeks leaving Turkey.

The Greek refugees from the pogrom of 1955 were among the millions who died or left Turkey during the first half of the twentieth century, many being forcefully expelled during the Asia Minor Catastrophe of 1922. In September of that year the Greeks of Smyrna were brutally attacked, and their homes, businesses, and churches burned. Thousands fled, with many perishing due to limited means of escape. Just as we are seeing today many refugees and victims of conflict, so then ancestral lands were stolen, homes and livelihoods were destroyed, and security, freedom, and well-being were lost.

In remembrance of the victims of these great tragedies, I ask the parishes of our Holy Archdiocese to conduct memorial services on Sunday, September 20. Let us also remember in solemnity the struggles and sufferings of millions of Greek refugees, recognizing the impact these events have had on Greece, Cyprus, and communities around the world. I also ask that you offer prayers for the millions of refugees who are experiencing great loss and threats today. Our forbearers found strength and hope through their faith and in their resiliency in the face of death. As we have known suffering within our communities and our heritage, we can share in their suffering; and as we have found comfort and hope in Christ, we can share comfort and hope with those who have lost so much.

With paternal love in Him, Memorial in Honor of Greeks Oppressed in Siberia

Memorial in Honor of Greeks Oppressed in Siberia
The Federation of Greek Communities of Russia managed to gather €70.000 to erect a monument in honor of the Greeks who lost their lives in the gulags of Siberia from 1937 to 1938. The Holy Trinity Monastery. Patronal Feast, Twelve Years After the Pogrom
Rebirth of the Ancient Holy Sites of Kosovo and Metohija

The Holy Trinity Monastery. Patronal Feast, Twelve Years After the Pogrom
Rebirth of the Ancient Holy Sites of Kosovo and Metohija
Hieromonk Ignaty (Shestakov)
"We still have hope," states a communiqu&#233; in the Rasko-Prizren diocese, "that the celebration of the Divine Liturgy, which prayerfully revived the monastery of the Holy Trinity, will be followed by other steps leading to a popular and spiritual rebirth, and Serbian return to this land."
Comments
×