A Law for All Seasons 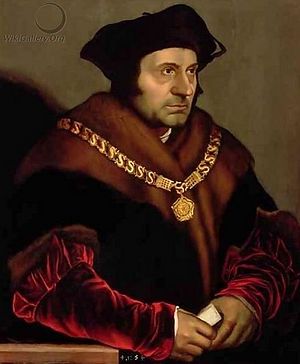 William Roper: So, now you give the Devil the benefit of law!

Sir Thomas More: Yes! What would you do? Cut a great road through the law to get after the Devil?

William Roper: Yes, I’d cut down every law in England to do that!

Sir Thomas More: Oh? And when the last law was down, and the Devil turned ’round on you, where would you hide, Roper, the laws all being flat? This country is planted thick with laws, from coast to coast, Man’s laws, not God’s! And if you cut them down, and you’re just the man to do it, do you really think you could stand upright in the winds that would blow then? Yes, I’d give the Devil benefit of law, for my own safety’s sake!

Thomas More was martyred by Henry VIII in England for his refusal to approve of the king’s adulterous marriage to Anne Boleyn. Like St. John the Baptist, he preferred God’s law to man’s. He died as a lawyer and a prophet. It is a lesson worth considering. The lesson is the role of law in the world.

In the Genesis account of the Expulsion from the Garden, Adam and Eve are thrust into the world. They had been naked, but we are told that God made them “garments of skin.” That phrase has a rich life in the thought of the Fathers over the centuries. It came to stand for God’s provision for our lives in our fallen state. The garments of skin are not a description of what is perfect, but of what is useful and necessary to preserve our lives.

Among the most common forms of the “garments of skin” are the mores, customs and laws of a people. None of these things can be treated as absolutes, or as perquisites for the return of Paradise. Traffic laws are not made for Paradise, but without them highways become the most dangerous places in the world.

Historically, the break-down of law is the hallmark of civilizational collapse. Apart from law, violence reigns and only the strong prevail. The upholding of law is not at all the same thing as justice itself, but without law justice becomes scarce indeed. The New Testament points to the primary role of law in a culture:

…the law is not made for a righteous person, but for the lawless and insubordinate, for the ungodly and for sinners, for the unholy and profane… (1Tim. 1:9)

Everyone falls into such a description at some point. The law is not given in order to make people righteous – that is the work of God. The law is given to restrain the wicked.

Frequently in modern culture, the ideology of modernism itself has perverted the law. The modern project has as its goal the creation of a better world and better people. Everything is done, finally, in the name of a secular utopia, and this changes the very nature of law.

In CS Lewis’ fantasy novel, That Hideous Strength, he describes a town that has been given over to an organized social experiment, an image of modernity run amok. The language of sociology replaces the language of law. It is not enough to make people observe the law – the powers that be want to make the people into something different. To be incarcerated under such a regime does not serve the purpose of “doing your time.” Incarceration becomes therapeutic, such that an individual can be held indefinitely, or at least until he or she has “changed.” Of course, Lewis reveals all of this to be a demonic conspiracy.

We hear echoes of this in the Marxist-spawned movements of political correctness. The nature of the rules shifts from protection of law to efforts to make people think differently. The intrusion of law into the very hearts and minds of a nation is, indeed, demonic.

Our own utopian improvement efforts are easily perverted, and always in the name of a laudable outcome. The expulsion of Adam and Eve did not come with the exhortation to expand paradise to the entire world. It came, instead, with prohibitions against our turning the world into a living hell.

The cultural habits of progress and utility are heady stuff. Most people have been so immersed in the mists of modern delusion that they believe that progress towards paradise is both possible and essential. Our conversations and arguments constantly turn on questions of outcomes and results. How is it that, with all the resources of modernity, America has succeeded in creating one of the largest prison populations ever known? Utility has been a demonstrable failure.

But this does not mean that we can live without the law. Indeed, the Antichrist in the New Testament is described as the lawless one (2 Th. 8). This characterization belongs to a very interesting point in the Apostolic preaching. A common part of the Apostolic deposit includes a description of the corruption found in the “last days:”

But know this, that in the last days perilous times will come: for men will be lovers of themselves, lovers of money, boasters, proud, blasphemers, disobedient to parents, unthankful, unholy, unloving, unforgiving, slanderers, without self-control, brutal, despisers of good, traitors, headstrong, haughty, lovers of pleasure rather than lovers of God, having a form of godliness but denying its power. And from such people turn away! (2 Tim. 3:1-5)

But you, beloved, remember the words which were spoken before by the apostles of our Lord Jesus Christ: how they told you that there would be mockers in the last time who would walk according to their own ungodly lusts. these are sensual persons, who cause divisions, not having the Spirit. (Jude 1:17-19)

This thread runs throughout the New Testament, from the preaching of Christ Himself to virtually all the Apostolic writings. The Christian reading of history is that it will end in lawlessness, a breakdown in the fundamental structures of society as well as the corruption of individuals. It is the picture of a very dangerous period.

And this takes us back to Thomas More who says, “And when the last law was down, and the Devil turned ’round on you, where would you hide, Roper, the laws all being flat?”

As we pray for nations and states, and what often seems like the perversion of law, we must not pray for the abolition of law. There is a temptation even for the righteous to “just get things done.” The Apostolic teaching does not direct our attention at a danger from the Left or from the Right, but to the direction of lawlessness. And it is clear from the words in Scripture, that the primary manifestation of lawlessness is to be found within individuals themselves.

Walk in wisdom toward those who are outside, redeeming the time. Let your speech always be with grace, seasoned with salt, that you may know how you ought to answer each one. (Col. 4:5-6)

And may He preserve our hearts from lawlessness. Rdr Andreas Moran9/27/2015 1:23 am
The Lord Chancellor was the 'keeper of the king's conscience'. Sir Thomas More (a saint of the Roman church) kept the king's conscience when the King Henry VIII lost it. More was the last Lord Chancellor who understood the correspondence between God's law and the laws of men. Lord Chancellors later became politicians and the link between God's law and laws made by the legislature was lost. But we should not think that the laws of men are therefore not for the good. Law has two limbs: the laws themselves and the legal system which applies those laws. A society one would wish to live in has good laws and a legal system which applies those laws impartially and without corruption or interference from the executive or the legislature. But from an Christian Orthodox standpoint, the loss of the link between God's law and human laws means that some civil laws, based on the relativistic modern concept of human rights, are now contrary to God's law. Relativism does not recognise the truth.
×