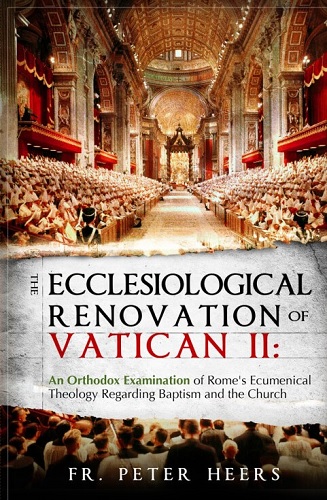 A new book, The Ecclesiological Renovation of Vatican II: An Orthodox Examination of Rome's Ecumenical Theology Regarding Baptism and the Church by Protopresbyter Peter Heers is now available for pre-order from Uncut Mountain Press:

"More than 50 years have passed since the Second Vatican Council - arguably the most consequential religious gathering of the 20th century - produced a new vision of what the church is and ought to be. Remarkably, in spite of the subsequent “ecumenical spring” and flurry of ecumenical activity, there has not been a thorough examination of the Council’s new ecclesiology from an Orthodox standpoint - until now. The Ecclesiological Renovation of Vatican II, first published in Greek in 2014, has already been hailed by leading Greek Orthodox churchmen as a watershed in ecumenical studies, a paradigm shift for ecumenical relations and ecclesiology, required reading for expert and seeker alike.

In 14 chapters, with more than 700 footnotes, both the historical and theological road leading to the new ecclesiology (part one) and the ecclesiology of the Council itself (part two) are examined thoroughly in the light of the patristic tradition of Orthodoxy. The roots of the new ecclesiology in the recent (Congar, Bea, Newman) and distant (Calvin, Aquinas, Augustine) West are unearthed and examined, thus shedding new light on the continuity, or discontinuity, of Vatican II with the Western Christian tradition. Seen in its proper historical and theological context the conciliar vision of the church is then examined in depth, compared and contrasted with the Orthodox patristic vision of the Body of Christ, revealing new horizons for both researcher and believer, participant in, and observer of, the Orthodox-Roman Catholic Theological Dialogue."

Reviews of the new book

This doctoral thesis is an important and valuable contribution to “the dialogue between the Orthodox and Roman Catholics,” as it concerns the Church, the Mysteries and ecumenism. It is a very scholarly and profoundly patristic ecclesiological examination, moving within the Orthodox perspective and offering new material, much of which will be new to most readers. There is no doubt that it will be a revelation for many, as it shines much light on the current condition and course of ecumenism.

In this present work the author, Father Peter Heers, presents in clear and concise language an in-depth critique of the new ecclesiology of Vatican II. Reading these documents in light of patristic texts and works of past and contemporary Eastern Orthodox and Roman Catholic theologians, Father Peter maintains that the Council in fact removed age-old boundaries and landmarks concerning what and who constitutes the Church as the Body of Christ, seemingly heedless of the warnings of Holy Scripture and the Church Fathers. We are indebted to Father Peter for helping us navigate our way through these documents and for his clarion call to vigilance lest these novelties be accepted for what they purport to be ― based on a return to the sources (ressourcement), rather than what they are in actuality ― an innovation (innovatus)

This study, the only one of its kind, penetrates to the core of the Roman Catholic teaching on the Mysteries… clarifying, in the most unambiguous manner, the entirely different presuppositions of approach to Baptism by Roman Catholicism and Orthodoxy. With Fr. Heers’ study, many issues are clarified, older positions are overturned and new research perspectives are opened up for an objective and dispassionate evaluation of the Dialogue and its real prospects … The author effectively calls attention to missing pieces of the historical and ecclesiological puzzle, which he then fills in with the unfailing guide of the ancient Christian Tradition which remains whole and intact within the historical continuation of patristic Orthodoxy. The successive maneuverings for the sake of the aims of Vatican II and facilitation of the Dialogue is critiqued soberly and objectively. The precision of his critical analysis is successful on account of his rich knowledge of the Orthodox Patristic Tradition and the medieval and contemporary West. His critique consistently remains within the limits of frankness and nostalgia for a honest Dialogue aimed at realization of true unity according to the words of Christ (Jn. 17, 21, 24)… This study is an essential contribution to the today’s ecumenical relations and will be considered carefully.

Fr. Heers’ study is the first detailed examination of the historical process of the separation of the Mystery of Baptism from the other Mysteries, with the conclusion being reached that this led to the “extension” of the Church and the establishment of a new Roman Catholic ecclesiology. This study does not simply constitute an academic contribution to an all-important theological issue, but it is rather an ecclesiological study which offers a great deal to the Church today, for it opens up new perspectives for every good-willed reader, whether Orthodox or Roman Catholic.

— Demetrios Tselingides, Professor of Dogmatic Theology, Theological School of the University of Thessaloniki

The Ecclesiological Renovation of Vatican II is one of the most significant works of Orthodox sacramentology to appear since Fr. George Metallinos’ I Confess One Baptism. Fr. Peter’s work is a fulfillment of Fr. Georges Florovsky’s plea that Orthodox theologians “re-experience” the dialectical twists and turns of Western theology, the goal being the clearing away of any unnecessary occlusions that stand between the non-Orthodox and the Church of Christ. Only through such a neopatristic approach as Fr. Heers’ are we able to sympathize with the “existential” situation of the non-Orthodox while at the same time preserving and proclaiming the Orthodox faith.

— James L. Kelley, author of A Realism of Glory: Lectures On Christology in the Works of Protopresbyter John Romanides

From the Author's Preface

"At the center of theological speculation within the ecumenical movement today stands the Mystery of Baptism. Baptism as the basis for Christian unity has been touted and painstakingly explored by both Roman Catholic scholars, especially since the Second Vatican Council in 1962, and Protestant scholars, within the World Council of Churches. Orthodox theologians have also taken part in this discussion, but largely from the outside looking in. This is because, while Roman Catholics and Protestants share a common history and many common ecclesiological assumptions, the Orthodox approach the question from an entirely different historical experience and set of theological presuppositions. They have an historical memory which retains the Patristic consensus of the first four centuries as the starting point and heart of the matter even today.

The potential of Baptism to be the key which will open the door to unity was not fully acknowledged until the Second Vatican Council. With this Council’s recognition of both the validity and efficacy of non-Roman Catholic Baptism and an already existing ecclesiastical unity, all eyes were set on Baptism.

In spite of the extensive ecumenical literature on the subject, scholars have neglected to examine important inconsistencies, historical and ecclesiological, contained in the conciliar document of the Council on the subject, Unitatis Redintegratio (Decree on Ecumenism), as well the historical and theological road which led to its drafting. As a result, premature theological conclusions have been reached and even celebrated without due consideration of the Patristic and Orthodox outlook.

In this study, our principle aim is systematically to present the main points of the dogmatic teaching on Baptism and the Church in the Decree on Ecumenism, with important references to the Council’s chief ecclesiological text, Lumen Gentuium. In order to better understand the historical and theological context of the Decree on Ecumenism, we will review key aspects of the historical and theological development of the new ecclesiology presented therein. As our examination is from the perspective of the Orthodox Church, we will concentrate on those points at odds with Orthodox dogma.

As a secondary goal of our study, we examine the claim put forward by the authors and defenders of the Council’s new ecclesiology that it represents ressourcement, a return to the sources, and that the Council, far from being a departure from the Tradition or an innovation, was a new actualization of Tradition. We will answer the question: Were the theologians of Vatican successful in returning Catholicism back to the ecclesiology of the Church of the first millennium, or did they, despite their stated intentions, fail in this regard?

Our study is divided into two parts. In Part One we will present key aspects of the historical development of Roman Catholic teaching on Baptism and the Church. In Part Two, we will examine the teaching of the Council on Baptism and the Church, as it is expressed in the two encyclicals referred to above, as well as examine the communioecclesiology as the guiding concept of the Council’s teaching."

Protopresbyter Peter Heers is the rector of the Prophet Elias parish in the village of Petrokerasa, Greece, outside of Thessaloniki. In 2013 he received his Doctorate in Theology (D.Th.) from the Aristotle University of Thessaloniki for his dissertation entitled On the Ecclesiology of the Second Vatican Council from an Orthodox Viewpoint which was subsequently published in Greek in 2014, and is now available as the present book in English.

Fr. Peter founded Uncut Mountain Press which has gained a solid reputation as a provider of Patristic and patristically-minded Orthodox texts, includingThe Truth of Our Faith by Elder Cleopa (Ilie), Apostle to Zaire: The Life and Legacy of Blessed Father Cosmas of Grigoriou, and St. Nikodemos the Hagiorite's Exomologetarion: A Manual of Confession, Concerning Frequent Communion, and Confession of Faith,among others.

The book can be pre-ordered now and will be available in November 2015.

New Book: Noetic Prayer as the Basis of Mission and the Struggle Against Heresy from Uncut Mountain Press
"This book is required reading for every Orthodox missionary, or, rather, every Orthodox Christian, for there is no Christian who does not seek to be made whole and bring wholeness and spiritual health to his neighbor."

Ecumenism and the Ecclesiology of Saint Cyprian of Carthage
Fr. Daniel Degyansky
Saint Cyprian of Carthage developed with fearless consistency a doctrine of the complete absence of Grace in every sect which had separated itself from the True Church. His doctrine is one of the basic foundation blocks of Orthodox ecclesiology and it stands in direct opposition to the presuppositions of the ecumenical movement. Moreover, his warnings about the enemies of the Church have traditionally guided Orthodox in their response to those outside Her fold.

The Mystery of Baptism and the Unity of the Church
The Idea of “Baptismal Unity” and its Acceptance by Orthodox Ecumenists
Fr. Peter Alban Heers
The Orthodox Church’s understanding of heterodox baptism flows from and is determined by its self-understanding of being the “one, holy, catholic, and apostolic Church,” which alone performs the one baptism into the death and resurrection of Christ. This is so, for the Church is known in her mysteries. In and through the mysteries the Church exists and is continually formed, her borders are set, her members identified. “Those who live their lives outside the mysterial (sacramental) life are outside the body of Christ.”
Comments
×