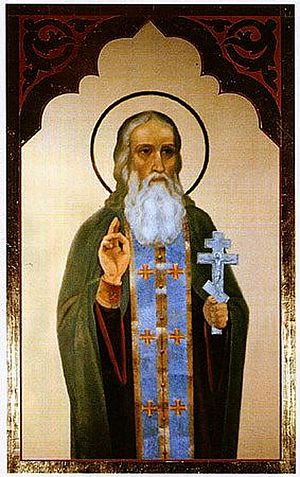 Saint Athanasius of Serpukhov (in the world Andrew) was born at Obonezh Pyatina into the family of the priest Auxentius and his wife Maria. He was, from youth, inclined towards prayer and renunciation of the world, and he sought a worthy guide in monastic labors.

At this time, news of St Sergius of Radonezh had already spread throughout the whole of Rus. The monastery of the Life-Creating Trinity at Makovets had become for everyone a luminous model of monastic organization. Here in the monastery, the cenobitic life transformed “the hateful discord of this world,” creating an oneness of spirit in an unity of love based on the example of the Divine Trinity Itself. The youth Andrew went from the outskirts of Novgorod to Abba Sergius at Makovets, following in his footsteps in search of spiritual perfection.

The favourite obedience of Abba Athansios, which he imposed upon himself, was copying books. The holy books were regarded by the Fathers as on the same level as the holy icons, the most important way to impart churchly ideas, those of theological and liturgical creativity.

The school of St Sergius, revealing to the Russian and to the Universal Church the whole extent of theological experiential knowledge of the Holy Trinity, is closely connected with the flourishing of church literature, with the necessity of interactive enrichment of the Russian Church by the literary works of the Byzantine Church and its theologians, and by the deep spiritual experience of the Russian ascetics.

In the year 1374, the Serpukhov prince Vladimir Andreevich the Brave, a colleague of Demetrius of the Don , turned to St Sergius with a request to found a monastery on his lands. Abba Sergius came to Serpukhov with his beloved disciple Athanasius, and having established the monastery of the Conception of the Most Holy Theotokos, he blessed St Athanasius to organize it, and then to be its igumen.

The monastery of St Athanasius was built near the city of Serpukhov, on the high bank of the River Nara. They therefore called it “Vysotskoi” [“of the heights”]. Hence also its title, with which entered into Russian Church history its founder and first igumen, St Athanasius of Vysotsk.

Abba Athanasius zealously set about the organization of the monastery entrusted to him. Many Russian ascetics arrived here, “on the heights,” for an heightened schooling in monasticism.

According to the teaching of Abba Athanasius, preserved for us by Epiphanius the Wise, to be a monk was no easy thing. “The duty of the monk consists in this, that he be vigilant in prayer and in divine precepts until midnight, and sometimes for the whole night. He should eat nothing but bread and water, oil even and wine would be altogether improper.” Through the words of the saint of God, many came to him at the monastery on the heights, “but then they slackened, and, unable to endure the work of ascetic struggle, they fled.”

Those ascetics of higher monastic worth remained with the holy abba. Therefore, it was to this monastery, to his disciple and fellow-ascetic Athanasius, that the God-bearing Abba Sergius of Radonezh sent his future successor, St Nikon (November 17) for tonsure and guidance in monastic endeavors. St Athanasius taught him: “Monks are called voluntary martyrs. Many holy martyrs suffered for a single hour and then died, but each day monks endure sufferings not from torturers, but from within, from the properties of the flesh and from mental enemies. There are struggles, and they suffer until their last breath.”

In 1478, after the death of St Alexis, Metropolitan of Moscow, the new Metropolitan, St Cyprian (September 16) arrived in Moscow. But Great Prince Demetrius of the Don wanted to establish his own priest and colleague Michael [Mitaya] as metropolitan, and he would not accept Metropolitan Cyprian. Instead, he expelled him from Moscow.

St Cyprian was in a difficult position. But he found support and sympathy among the pillars of Russian monasticism, Sts Sergius of Radonezh and Athanasius of Vysotsk. From the very beginning, they saw the canonical legitimacy of the Metropolitan in his dispute with the Great Prince and they supported him in the prolonged struggle (1478-1490) for the restoration of canonical order and unity in the Russian Church. St Cyprian had to journey several times during these years to Constantinople to participate in council deliberations concerning the governace of the Russian Church. On one of these journeys, with the blessing of holy Abba Sergius, St Athanasius of Vysotsk went to Constantinople with his friend the Metropolitan, leaving his own disciple, St Athanasius the Younger as the igumen of the Vysotsk monastery.

At Constantinople St Athanasius settled into the monastery of the holy Forerunner and Baptist John (Studion), where he found a cell for himself and for several disciples who had come with him. St Athanasius occupied himself with prayer and salvific theological books. The monk spent about twenty years in the capital of Church culture, working to translate books from the Greek language and copying Church books, which he then sent off to Rus. Thereby, he transmitted to the Russian Church not only a legacy of great Orthodox thought, but also the traditions of Constantinople’s masters of manuscript illumination, with their elegant penmanship and artistry of textual miniatures, achieving a harmony of content and form. A continuing creative connection was established between St Athanasius’s skillful copying of books at Constantinople and the calligraphic and iconographic school of the Vysotsk monastery at Serpukhov.

It was not by chance that it was especially at the Vysotsk monastery that the holy Igumen Nikon guided the future iconographer St Andrew Rublev (July 4), as once previously the God-bearing Abba Sergius had guided Nikon himself in this monastery to spiritual maturity and an understanding of the rejuvenating and transformative spirit of pure churchly beauty.

In this sacred service of churchly beauty, in constant liturgical activity for the glory of the Life-Originating Trinity, the life-bearing genius of St Andrew matured. God destined him for the great visual rendering of the theological and liturgical legacy of St Sergius, with the immortal wonderworking icon of the Most Holy Trinity for the iconostasis of the Trinity cathedral. In the iconographic creativity of St Andrew Rublev, just as in the temple-building activity of St Nikon, and in the hagiographic works of Epiphanius the Wise, we find embodiment and synthesis of the finest traditions of the Byzantine and Russian art.

This creative synthesis was served also by St Athanasius of Vysotsk all his life. Living at Constantinople, he continued to work for the Russian Church, and for his native land. To give but one example, he sent to the Vysotsk monastery ten icons of the finest Greek style. He and his disciples translated into the Slavonic language the “Four Hundred Chapters” of St Maximus the Confessor, the Chapters of Mark about church services, and the Discourses of St Simeon the New Theologian.

In the year 1401, just before his death, the venerable elder copied, and possibly translated himself, a Church Rule, distributed within the Russian Church under the title, “The Eye of the Church.”

St Athanasius spent his life in constant work with books. He died at Constantinople in old age in the year 1401 (or perhaps a bit later). Russian chroniclers note him as an elder “virtuous, learned, knowing the Holy Scriptures”, to which “at present his writings give witness.” His Life was written in the year 1697 by the hieromonk Karion [Istomin] of the Moscow Chudov monastery. Dwelling together in unity—St. Sergius of Radonezh
Nun Cornelia (Rees)

Dwelling together in unity—St. Sergius of Radonezh
Nun Cornelia (Rees)
The Russian people’s problems with power struggles, treachery, and war between different princes were not over. In the midst of it all, there stood a humble monk, ever avoiding honor or power over others, asking nothing and giving everything. This was a magnetic force that drew together seemingly irreconcilable enemies. The Life of Metropolitan Nicholas of Alma-Ata and Kazakhstan, Confessor

The Life of Metropolitan Nicholas of Alma-Ata and Kazakhstan, Confessor
Vladyka said, “Let’s pray to the Heavenly King; perhaps he will hear our prayer.” They began to serve the moleben for rain. Then a miracle happened—the sky, which did not have a single cloud, darkened, became covered in thick rain clouds and it not only rained, it poured, as if a bucket of water had spilled out. The walls of the old Uralsk cathedral trembled from the thunderclaps. Vladyka paused in his prayer and said, “Orthodox people! Isn’t this a miracle?!”
Comments
×