“The Cross is the ISIS’s main enemy; today no trace of a cross can be seen in Mosul” 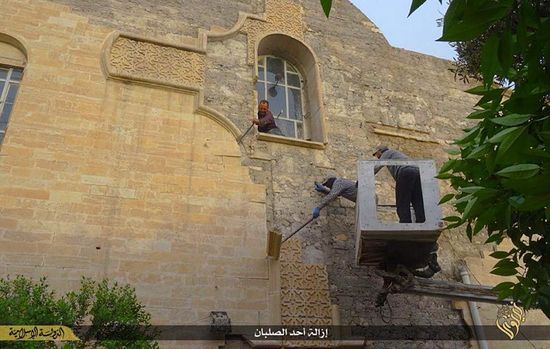 A war is currently being waged against Christianity on the territory of the Biblical city of Nineveh, which is currently under control of the “Islamic State” militants: according to eyewitnesses’ evidence, the fanatics are trying their best to eliminate the very memory of the Christian presence in Mosul, reports Ankawa news agency.

In his report, sent to the Ankawa agency’s staff writer Yunus Zanoun, the journalist A.S. from Mosul gave information about ISIS’s intention to wipe out all the Christian symbols from Nineveh, and that they are working hard in order to achieve this ambition. “The cross is ISIS’s main enemy; that is why today no traces of crosses can be seen in Mosul,” A.S. noted.

According to the journalist, the terrorists threw down all the crosses from domes of Mosul churches within two weeks after seizing city; they organized raids on houses of Christian residents of Mosul to destroy all the crosses and icons in the city.

“The dwellings were ravaged with great fury – and the vestiges of this hatred for Christianity can be seen here to this day… As for churches and monasteries, whole teams are involved in the job of dynamiting or partially demolishing their buildings. For example, large-scale work at the St. George’s Monastery in the al-Arabi neighborhood of Mosul was carried out to dismantle the iron crosses from the fencing, while the St. Ephraim’s Monastery in the ash-Shurta neighborhood was deliberately “enlarged”—this was done to conceal a huge cross carved on the front of the monastery’s main church,” A.S. related.

At the same time, the Alsumaria.tv portal reported that “Islamic State” militants exploded a number of Christian homes in the Karakush district. There is still no information on the number of victims or the extent of damage to the residents’ property.

Pastor Philip Kalsal5/17/2019 12:49 pm
There will be suffering for Christian's because the devil hates us, note these words.
" THE DEVIL CAN BURN ALL THESE CROSS'S THAT CAN BE SEEN BY THE WORLD AND CLAIM TO WIN, BUT HE CANNOT REALLY CLAIM THE VICTORY UNLESS HE BURNS THE CROSS THAT CANNOT BE SEEN BY THE WORLD BUT BY GOD INSIDE OUR HEART'S THROUGH JESUS CHRIST.
RUN TO WIN THE PRICE PHILIPPIANS 3:14

Juan el greiego the second5/26/2016 1:04 am
Sadly the only way to defeat isil is to kill them all; they are the new nazis. They have theSpiritual pus of Adolf Hitler.They must die and theirmtowns and villages destroyed until they are no longer seen on the earth.
Juan El Griego11

ed9/26/2015 7:01 pm
Shameful what they are doing to our Lord's houses and his people in the very lands where people chose to become christian.


This is part and parcel of islam, not just radical islam.

islam says that they will fight until 'there is worship only for allah throughout the whole earth'.