The Good of Metaphysics

Metaphysics, despite what booksellers may offer in the way of do-it-yourself witchcraft manuals and stories of UFOs, is much different than any popular misconception of its meaning. For Aristotle, the starting point of Wisdom, or philosophy, was metaphysics. Modernity has more or less rejected metaphysics in its quest for self-destruction. But metaphysics will never go away, because metaphysics is reality itself—the study of the totality of what is. Metaphysics is the starting point in terms of actual foundations of knowledge and presupposition, yet it comes at the end of the process of pedagogy, as it is the highest science. Nowadays, aside from certain continental philosophers who follow in the train of genius writers like Husserl, theoria and metaphysics have been jettisoned for pragmatism, post-modernism and other forms of self-destructive prattle. And over the length of centuries in the West, there’s been no lack of contributors to this gradual decline.

Unfortunately, certain basic flaws in Aristotle’s own position led to that decline, particularly his adoption of empiricism. Aristotle cut the world off from the possibility of any other world or reality or dimension, and while it took a millennium or two, this ultimately resulted in materialism, positivism and finally the negation of all meaning and purpose. In fact, that last notion was crucial for early moderns like Bacon who did have legitimate disagreements with Aristotle. Aristotle had adopted several ideas about the natural world from tradition, such as that the heavens are perfectly unchanged, static realities, or that rocks have an essential quality of “going downward.” Bacon rightly laughed at this, but what Bacon didn’t foresee was that tossing out Aristotle’s final cause, or telos, would result in the total collapse of philosophy.

The place of Thomas Aquinas can also not be forgotten on this slope of decline. Aquinas followed suit with an Aristotelian-Platonic synthesis (so he thought), which placed human reasoning on an independent basis that never touched the divine, since the absolutely simple divine essence, within which the divine archetypes upon which even “natural” reasoning was based, were never accessed by the mind of man in this life. Aquinas upheld this notion due to his idea of simplicity, which was such that the divinity, which is also the ground of human knowledge, never interacts with or connects to the abstracted phantasms of man’s mind, since the exemplars themselves are “in the divine essence,” a “First Cause” that is only able to “reveal” itself by created effects in this life. Bacon departed from these ideas, and turned to a more consistent (so he thought) empiricism.

We don’t observe a telos, or purpose. We observe cause and effect, and from a human vantage point. But this is a double-edged sword: If things don’t have any purpose, essence or meaning outside of the arbitrary “meaning” individual given humans ascribe to them, then meaning doesn’t inhere over time, and we end up with the problems Hume elucidated about identity over time. Certainly Bacon still thought there was a Deity and meaning in the world, but he set in motion the train of (flawed) reasoning that would ultimately dispose of any objective meaning. If we adopt Bacon’s more consistent Thomistic more consistent Aristotelian empiricism, then give it time: we shall end up with Hume’s radical skepticism. And radical skepticism led moderns to adopt bizarre, destructive philosophies like nihilism, post-modernism and other emanations of the humanist faith. Kant was thus right to seek for an answer to Hume in transcendental categories, because that signified a return to the crucial area of a priori notions, where Plato was right and Aristotle was wrong (though Aristotle was right about quite a lot). 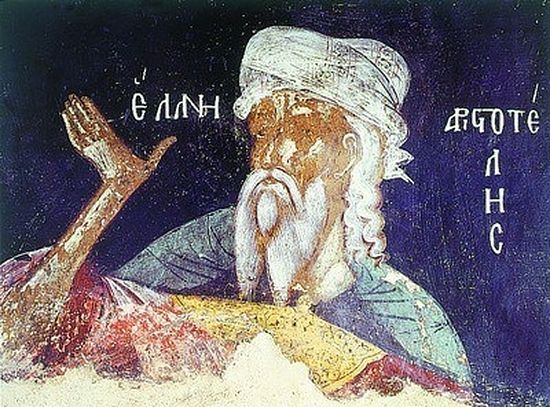 Fresco of Aristotle in the Philanthropion Orthodox church on Lake Ioanninon, Greece. By George and Frangos Kondaris, mid-14th century.

For Kant, the solution was to reconcile how there could be a synthetic a prioriclaim that was true: how can we make an a priori claim about all experience? Kant, following the Aristotelian notion of transcendental arguments, correctly listed pre-conditional necessary categories that were presupposed in any human experience of cognition. However, Kant traveled the road of folly by still ascribing to empiricism, and in so doing, his categories never touched the objective, external world. Kant could never know if any of his claims and arguments were actually true of the noumenal world, and so he stated they were only true of the phenomena of experience as they appeared. And from there, as a rationalist, he tacked on all kinds of other ideas that would only further the cause of destroying what was one of the greatest insights in the history of philosophy—pre-conditional categories of experience, proven by indirect, transcendental argumentation.

The solution to this imagined dilemma is rather simple: toss out the illusory divide between the phenomenal and noumenal, and hold to a direct experience of the world – to which the transcendental categories do indeed apply—and explain the objective world to which all men are party. This actually approach not only works; it makes sense, and it explains how we do things like see, interpret, walk, analyze, build rockets, form sentences, etc. Brilliant philosophers like P.F. Strawson have carried on this monumental work of real philosophy in transcendental arguments, venturing into the realm that most obviously demonstrates this: that of linguistics. For a human person to make a single sentence presupposes an entire world, structured in a certain way—this is the salvation and continuation of real philosophy, while the prophets of relativism and post-modern fantasists will be left in the dust.

So we can salute Aristotle in his primacy of metaphysics and be simultaneously saddened in his acceptance of the nascent empiricism that would be the death of the West, a process ending in all-corroding relativism. It may have taken a few thousand years to realize the full implications of the supposedly neutral “scientific method” unto civilization’s collapse, and if there is to be science any longer, it must recognize that theoria and philosophy are vitally necessary. Naturally, it’s a problem not so much of intellect as of the proud human psyche in convincing our fellows to even understand what transcendental arguments are and why they are relevant.

Questions such as these should appeal to Gödelian mathematical types, who are often far better-equipped to tackle these issues than so-called “philosophers” of our modern universities, intellectual harlequins who are in truth nothing other than the sophists Plato and Aristotle once conquered. It’s no accident that the ancient sophists are an unknown rabble, aside from one or two obscure names. Thousands of years later, the world is still blessed to know who Plato and Aristotle are. The sooner the modern sophists pass out of existence, the better. Let us hail a return to Aristotle and logic, purged of its errors—a return to sound reasoning—to the trivium and quadrivium, and to the transcendent and the sacral.

Soul of the East Scientism: The Joke's on You

Scientism: The Joke's on You
Jay Dyer
Arrogantly assuming they know, when in fact they do not (having a gadfly’s appearance of knowledge), scientism fancies logic only when it suits it, quickly to discard and dispense with such rigors when the heat comes. “All human knowledge comes through sensory experience” sets their assumptions, yet when pressed as to whether this proposition itself is a fact of sensory data (which it obviously is not), universal claims suddenly dissipate and this great commandment is hailed as an obvious given. It’s a new maxim, a new commandment from the gods of the Enlightenment, and you dare not ask such questions. Yet if science is so groundbreaking and revolutionary in character, why are its high priests so afraid of these basic questions of epistemology? Atheism, Not God, is Odd

Atheism, Not God, is Odd
Closer to home, an analysis of the 2008 British Social Attitudes (BSA) survey by David Voas of the University of Manchester reveals that the historical correlation between being educated and being "non-religious" has not only weakened but reversed.
Comments

Ari8/25/2019 3:57 pm
Gavin, I have commented just to tell you the pointlessness of your comment. Arnobius, before he was received into the Church, wrote many books defending the Christian Faith. Another type of background checking shows that before Jay was received, he had converted many to the Church, something Arnobius had perhaps succeeded in doing before being himself received into the Church. Also, I have a friend who says such things as these: "I am Orthodox", "I go to the Orthodox Church", and he knows he is not an official member of the Church yet, even though God willing he soon will be.

Gavin James Campbell6/23/2019 5:18 am
A little bit of background checking shows that Dyer was not even Orthodox when he wrote this. That he lied about his membership in the Church.

Nick Spitzer11/10/2016 7:14 am
The situation has actually changed over the last 20 years. Metaphysics is a burgeoning field in most analytic philosophy departments with several journals and conferences devoted to it.
×