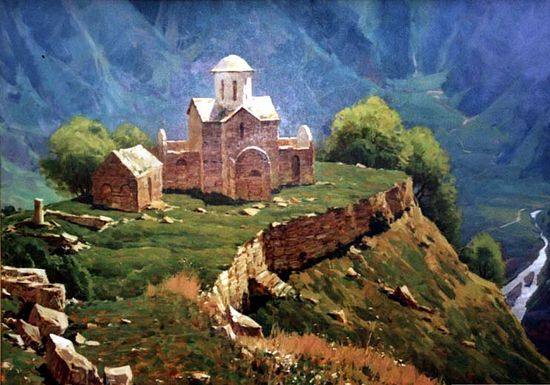 Sergei Chitanava tells a story of his grandfather:

My grandfather Nikoloz died four years ago at age 102. He was of sound mind and memory until the end of his life. When he was a young man a miraculous event occurred in his life which radically changed his worldview and lifestyle.

He believed the Bolshevik propaganda and became a Komsomol member at the age of fifteen. Four years later he became a communist, and, unfortunately, participated in the destruction of churches. When one of the churches was being ravaged, he took down an icon of the Mother of God from the wall and was about to throw it into the fire. But suddenly holy myrrh, as if it were tears, started streaming from the eyes of the Most Pure Virgin. 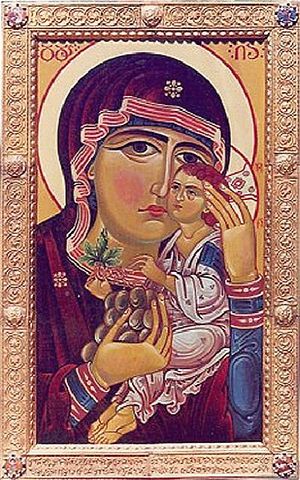 Nikoloz screamed and ran out, crying: “The icon began weeping and speaking to me! She has said such things to me … Woe to me, a wretched man, and unto all those who are desecrating the house of God!”

He threw his weapon to the ground, tore his clothes and rushed to the forest.

His parents and brothers searched for him in the mountains for a long time, but Nikoloz seemed to have fallen through the earth. All in vain—they could find him nowhere.

When all hope of finding the lad was lost he returned home himself. However, he was as dumb as a fish; his only answer to all questions was: “I remember nothing! You had better not ask me about anything.”

From that time Nikoloz avoided communists. A rumor spread through the village that the icon had allegedly driven him mad.

But Nikoloz made no attempt to dispel these rumors. He was in company with other people very seldom. Every day from dawn to dusk he would work in the field and in the vineyard. He always concealed a part of his earnings somewhere. The man saved money so assiduously that even if he had been starving he would have never taken anything from his savings. To tell the truth, nobody in his family knew where he was hiding the money.

Then he married: an orphan girl was found for him. Grandmother Mariam never regretted marrying grandfather Nikoloz. Occasionally she used to say: “I wish for my daughters and granddaughters that they find husbands as “crazy” as Nikoloz.”

When the Georgian people were gradually returning to the Church at the time of spiritual awakening, grandfather Nikoloz rejoiced very much but never entered any church himself, saying, “I am unworthy.”

Only on his deathbed did grandfather Nikoloz reveal the truth to me and my cousin, a priest.

According to his story, when he ran away to the woods, saints together with the Heavenly Queen appeared to him. The Holy Theotokos said: “The Lord gave Me Georgia [Iberia] as My first portion on earth. Even if you destroy the House [i.e. churches], I will not abandon you all the same. But I will not give the Georgian people even one tenth of the abundant grace that I could grant to them. Yet your suffering will be prolonged.”

Then She asked him: “Maybe one day you will give Me back My House?”

And it became known that throughout his life grandfather had wanted to build a church (at least a small one) in honor of the Mother of God, and that is why he saved money all his life.

But because of numerous economic defaults in the country, the sum he had collected lost its value and Nikoloz was not able to realize his dream.

Right before his death, grandfather Nikoloz gave my cousin his old tobacco pouch with several gold coins in it and asked him: “I know that this money will not be sufficient for building a church. But maybe you can order a mounting for an icon of the Mother of God on my behalf.”

Translation from the Russian by Dmitry Lapa Entrance of the holy Equal-to-the-Apostles Nino
Archpriest Zakaria Machitadze
Holy Apostles Andrew the First-called and Simon theCanaanite first preached the Christian Faith in Georgia inthe 1st century, but at the beginning of the 4th centurymost of the country was still pagan.
Comments

Cyrill Smolky10/2/2015 11:28 am
Faith and the miracle of faith recognises no ethnic or other borders. Indeed the more humble the perosn the more inoccent is his/her soul to become the messager of the holy spirit.
×