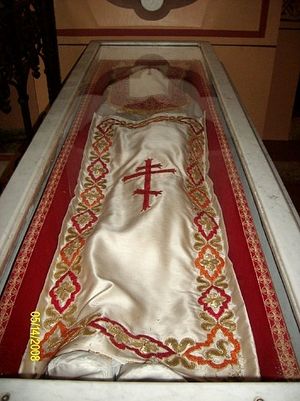 The relics of St. Elizabeth in Jerusalem
As part of its ongoing investigation into the murder of the last royal family of Russia and the testing of their alleged remains, the Russian Investigative Committee has stated that samples of the relics of St. Elizabeth the New-Martyr, the sister of Tsarina Alexandra and herself a Grand Duchess, may be delivered from Israel to Moscow to aid in establishing the identity of the remains found near Ekaterinburg alleged to be those of the Royal Martyrs.

Senior investigator Vladimir Solovyov explained to Interfax that it is a complicated matter involving international relations and delivery, and that negotiations are ongoing with the Russian Orthodox Church as a final decision has yet to be made.

Growing up in Germany, the future Grand Duchess of Russia was raised a Lutheran, but was received into holy Orthodoxy following a pilgrimage to the Holy Land. After the assassination of her husband she founded the Sts. Mary and Martha Convent in 1909 and the sisterhood became known for its active ministry to the sick and suffering, especially during the First World War. St. Elizabeth was known as the “White Angel of Russia.”

Like Tsar-Martyr Nicholas II and his family she was arrested by revolutionaries in 1918 and was eventually martyred in an old mine in the Ekaterinburg region. She was canonized in 1981 by the Russian Orthodox Church Outside of Russia and in 1992 by the Moscow Patriarchate as a new martyr.

Thirty-three Portraits of Grand Duchess Elizabeth
Photogallery
November 1, 2014 marks the 150-year anniversary since the birth of Royal Martyr Elizabeth Feodorovna, one of the Russian people’s favorite saints, and honored all over the world. Sean L. Tobin12/11/2015 8:43 pm
I think it is a shame that they have to go all the way to Jerusalem to disturb the remains of this saintly lady just to prove that the remains, which we all know have already been certified by DNA testing, to be the remains of Tsar Nicholas and members of his family.

If DNA tr4sting has already been carried out on the remains of the Tsarevich and his sister, the Grand Duchess Maria, and it has been conclusively shown that they are by DNA comparison the people that has been claimed they are, it is wrong to go through all that testing again just to convince the Orthodox Church, which is nothing but a Department of the Russian Government of today just as it was a Department of the KGB in Soviet times. It is a sacrilege

There are other remains in Russia and other direct descendants of members of the Imperial family alive including the Duke of Kent of England. This whole exhumation of Tsar Alexander III and others to prove something we already know is really a great sham.
×