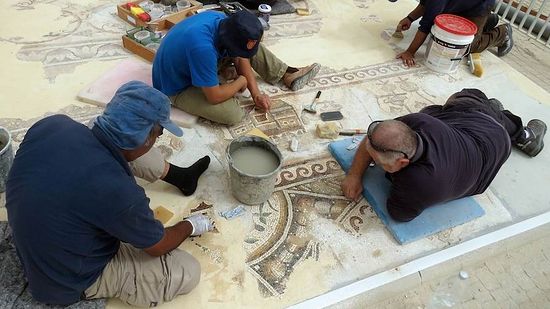 A recently discovered rare Byzantine-era mosaic will be publicly displayed for the first time at a festival in southern Israel.

The 1,500-year-old mosaic was discovered during an archaeological excavation in Kiryat Gat two years ago and will be permanently displayed in the southern Israeli town starting Thursday, the Israel Antiquities Authority announced in a news release.

The mosaic, sections of which have been preserved, once served as the floor of a church and depicts a map of an Egyptian town with streets and buildings.

“The artist utilized tesserae of 17 different colors in preparing the mosaic,” archaeologist Saar Ganor of the antiquities authority said in the news release, referring to the square tiles of which mosaics are composed.

“The investment in the raw materials and their quality are the best ever discovered in Israel.”

The opening of the mosaic to the public is part of the new Factories from Within festival in the Kiryat Gat Industrial Park, the first of what is planned as an annual event.

During the dig, archaeologists uncovered evidence of a flourishing local Byzantine culture at the site, including a pottery workshop and glass vessels.

The region, near Israel’s southern coastal plain, was home to an important Byzantine settlement. Archaeologists believe that residents produced and sold wine that found its way across the Mediterranean region.

The church itself, which served the surrounding towns, sat on the road between Ashkelon and Jerusalem, where archaeologists have uncovered other Byzantine settlements. Mozaicon. Vibrant Romanian Mosaics
Mozaicon was started by a group of Romanian fresco artists who came together in 2008 to create the mosaics for the Patriarchal Cathedral Complex in Bucharest.

Byzantine Monastery discovered in Israel
Archaeologists in Israel have discovered the remains of a Byzantine-era compound near Jerusalem. They believed it is to have once been a monastery and includes an oil press, wine press and mosaics.
Comments
×