Metropolitan Savva of Warsaw and All Poland: We Are Unpleasantly Surprised by the Fact That Orthodox Parishes are Captured by Force in Ukraine 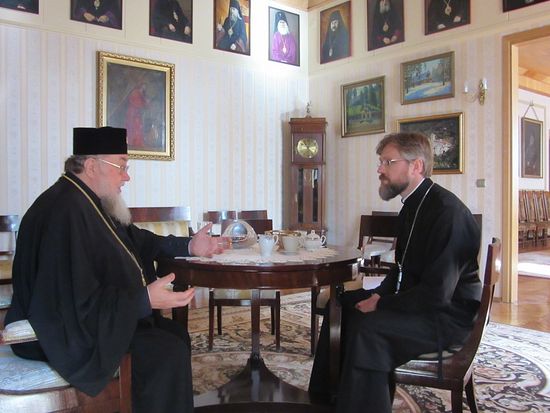 "We are unpleasantly surprised by the fact that Orthodox parishes are captured and the Orthodox are subjected to discrimination in Ukraine. Where is the state power, which does not defend people and fails to ensure their religious rights? Ukraine wants to be a democratic state, but there must be order in a democracy," said the primate of the Polish Orthodox Church, His Beatitude Metropolitan Savva of Warsaw and All Poland, during his meeting with Archpriest Nikolay Danilevich, vice-chairman of the Department for External Church Relations of the Ukrainian Orthodox Church (UOC), who is in Warsaw for an OSCE conference.

During the meeting, which took place on October 1, 2015, at the metropolitan’s residence, Archpriest Nikolay informed His Beatitude about the present situation concerning the rights of the UOC faithful as some local councils have adopted discriminative decisions with regard to the UOC and its churches have been captured. Metropolitan Savva, on his part, spoke about the status and rights of the Orthodox Church in Poland, regulated by a special state law adopted in 1992 whereby the Orthodox minority in this Catholic country enjoys all the necessary rights. 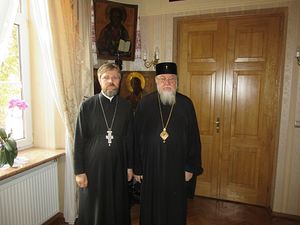 His Beatitude also spoke about the situation concerning the Ss. Cyril and Methodius Monastery in Ujkovice, which was closed by the decision of the Holy Synod of the Polish Orthodox Church for various canonical violations. Among them are cases in which the monastery clergy concelebrated with representatives of the Ukrainian Orthodox Church of the Kiev Patriarchate (UOC KP), which is not recognized by the world of Orthodoxy. It was noted that the number of Ukrainians has noticeably increased in Polish Orthodox churches today, and the local clergy give them the proper pastoral care.

Metropolitan Savva said he prays for Ukraine in this crucial time for the Ukrainian state and conveyed words of fraternal support to the primate of the Ukrainian Orthodox Church, His Beatitude Metropolitan Onufry of Kiev and All Ukraine. Horlivka commemorates Those killed on “Bloody Sunday” last year
On the first anniversary of “Bloody Sunday”—the day when artillery shelling of the residential neighborhoods of the Horlivka center began—a memorial service for the repose of all the civilian residents killed in the armed conflict was held at the request of the local inhabitants. A monastery is closed in Poland for concelebrating with schismatics from “the Kyiv Patriarchate”
A monastery has been closed at the Przemysl Diocese of the Polish Orthodox Church by decision of its Holy Synod because of its clergy’s concelebration with representatives of the so-called “Kyiv Patriarchate.” The abbot has been suspended. The Monasteries in Poland are Proof that the Church is Alive
Magdalena Slavinskaya, Archimandrite Athanasius (Nos)

The Monasteries in Poland are Proof that the Church is Alive
Magdalena Slavinskaya, Archimandrite Athanasius (Nos)
I will say it once again: our goal is always salvation. The world changes, but the Orthodox faith does not. We should not conform to the world; the world should conform to the faith. Circumstances in life can change, but the strivings of the human soul remain forever unchanged. A person can strive for only one thing—for fullness, which is Jesus Christ. This is the most important thing in the life of every person who believes, and not only of the monk.
Comments
×