A Visit to Elder Ieronymos of Aegina 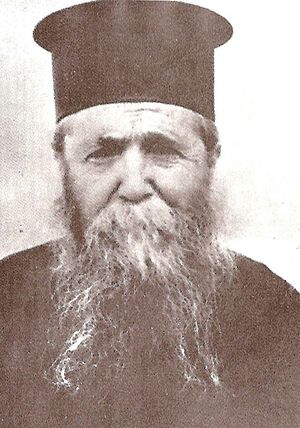 The Greek island of Aegina is a holy place. A small habitation of 87 km2 and 13,000 people, its map is dotted everywhere with monasteries and churches to the glory of God. Aegina is known for the two saints who labored there—the sixteenth century bishop of Aegina, St. Dionysios of Zakynthos, and especially the great luminary of the nineteenth and twentieth centuries, St. Nektarios. 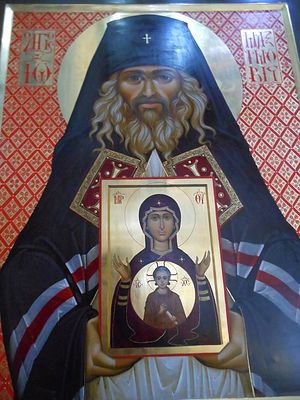 The icon of St. John Maximovitch in the church of the Entrance of the Theotokos
The church of the Entrance of the Theotokos sits along the water at the port, and inside hangs a beautiful icon of St. John Maximovitch, welcoming all of us Americans to the island. And just a few miles from the port the relics of St. Nektarios lie in the convent of the Holy Trinity. Many pilgrims testify that when they lean against his tomb in prayer, they hear the saint knocking from inside the tomb, making his presence known. Pilgrims are also welcome to enter the room in which he lived, from where so many prayers ascended before the throne of God, sanctifying the space. This monastery, and its massive cathedral named in honor of St. Nektarios are the most popular pilgrimage destinations on the island. 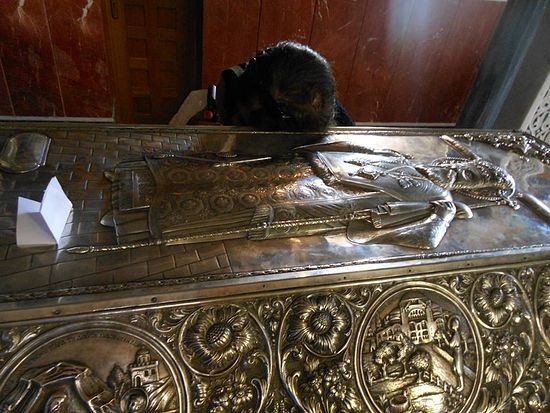 Prayer at the relics of St. Nektarios 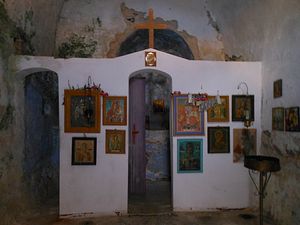 One of the chapels in the vilalge of Paleachora
Just a few minutes down the road on foot is located St. Catherine’s monastery, where, among other treasures, is venerated an icon of St. Spyridon with his eyes closed. Many pilgrims have claimed to see his eyes open in the icon as they prayed. Just up the road from Holy Trinity convent is the ancient hillside village of Paleachora which at one time was home to at least seventy churches. More than thirty remain and are open to visitors, bearing witness to the great faith of the Aegean people through the centuries. A forty-five minute walk from St. Nektarios brings one to the Monastery of Panagia Chrysoleontissa (the Mother of God the Golden Lioness), past a roadside shrine marking the spot where the Theotokos leaned against the rocks as she stopped to rest.

There are several other venerable monasteries and churches on the island, but there remains yet one great treasure which is perhaps comparatively unknown in the wider Orthodox world—that is, the relics of the great twentieth-century elder Ieronymos of Aegina. Even the kindly shop owner at the port who eagerly directed me to the Holy Trinity monastery to venerate St. Nektarios had never heard of Elder Ieronymos and was clueless to help me find his monastery. Thankfully I was able to find a cab driver who knew the way to the small street on which sits the Annunciation Monastery where the elder for decades lived and labored.

It is said that several inhabitants of Aegina have independently had the same dream in which three clergymen appear: St. Dionysius, St. Nektarios and Elder Ieronymos. The canonized saints are seen discussing between themselves, and pointing to the elder they say: “He is higher than we are.”[1] Thus, while the elder is as yet not as well-known as his fellow Aegean saints, he offers to us a life and teachings no less vital for modern Orthodox Christians.

Not knowing any Greek I had no idea what to expect at the elder’s monastery, but I was warmly greeted by the one elderly nun who still lived at the monastery and a frequent pilgrim to the monastery who was able to translate between Greek and English for me. I was very pleased to see as I stepped into the monastery and walked down the entrance hallway an icon of the Royal Martyr Nicholas II, and a picture of the holy Metropolitan Philaret of New York (ROCOR), reminding me that the saints are truly of one Spirit, be they Greek or Russian, or any other ethnicity. 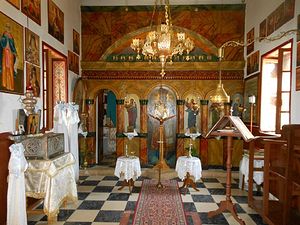 The church at Annunciation Monastery - the reliquary of the skull of Elder Ieronymos can be seen on the left
Mother Eupraxia spared no expense in treating me to delicious Greek coffee and various sweets, and despite her age and visible tiredness and the fact that I had arrived unannounced, she did not decline to offer me her time, and to allow me to venerate the church and various other holy sites within the monastery. Inside the church of the monastery, on the left side against the wall is a reliquary with the precious skull of the God-bearing elder. Outside is situated his grave, and I was also blessed to enter two cells where the elder stayed, as well as the confined and unadorned cell to where he would retreat for solitude in order to descend into his heart in noetic prayer. Of course, when a saint reposes, the Holy Spirit that fills him does not suddenly depart, and so it is a great opportunity and a blessing for any Orthodox Christian to make a pilgrimage to such a place, and to try to enter into the stillness and prayer that characterized the life of Elder Ieronymos. 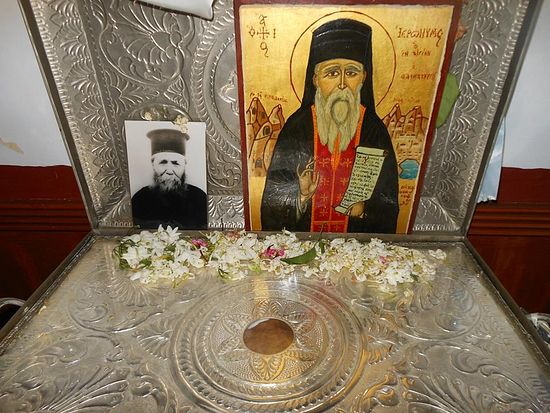 The skull of the elder

After I venerated the church and relics, Mother Eupraxia, who had known the elder in her lifetime, sat down to speak to me about his life and what she recalled of him. A thorough biography of him is available, but it is one thing to read of a saint, and it is another to hear of him from the lips of one who knew him, and experienced him. Mother Eupraxia is a living link to Elder Ieronymos, who himself knew many great elders such as Joseph the Hesychast, and in him she experienced the life of Christ that the saints acquire. 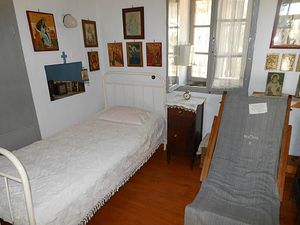 One of the elder's cells
Mother Eupraxia related to me, through our translating friend, that the elder, born Vasilieos in 1883, had always been pious and prayerful, from his youngest years. While other children were interested in games, he wanted to go to the caves outside his town of Kelveri in Cappadocia, where countless ascetics had labored over the years. There was a great ascetic living there at that time named Missael, with whom Vasilieos became well-acquainted, and from whom he learned the mystery of noetic prayer of the heart. Missael was a married man, toiling all day to support his family, and retreating at night to the caves, there to commune with Christ.

Through Missael’s example young Vasilieos was inspired to dedicate his entire life to Christ, and in time he would do so as both a priest and a monk. From an early age he would preach in church and his words, full of zeal, inflamed the hearts of many around him to turn more fully to Christ our Savior. Of course, as is often the case in the lives of the saints, this also earned him some enemies who tried to keep him from attending the divine services and even tried to kill him. Humbly accepting that his ministry was not appreciated by all, he went to venerate the holy places in Jerusalem where he met the future Elder Arsenios the Cave-Dweller, and stayed for several months, before returning to Constantinople.

In 1922 he left Asia Minor due to the upheaval there and went to Greece, and later to Aegina, where he remained for the rest of his life, until his repose in 1966. During his time on the island he obediently accepted ordination to the priesthood and he consoled countless who were suffering in soul and body, even building a hospital church named for St. Dionysios. In serving the Divine Liturgy his soul was elevated to the heavens and he desired ever more to devote his life entirely to God in ascetical seclusion. 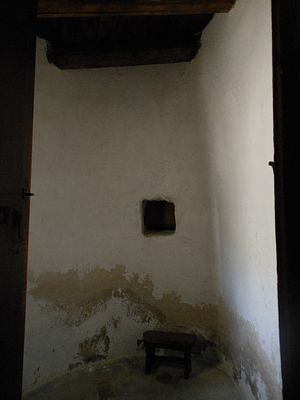 The tiny cell where he entered into the prayer of the heart
One incident occurred soon after his ordination which exemplifies the whole life of the elder: while serving the Liturgy on the fortieth day after his ordination he was vouchsafed a frightful vision. He beheld, in the chalice, suddenly the Body and Blood of Christ taking on the visible form of flesh and blood, which left him understandably shaken. With much fear and trepidation he finished the Liturgy, and he remained in the altar for many hours, tearfully entreating the Lord to return the Gifts to the appearance of bread and wine that he might finish consuming them. The elder took this vision as a sign not of his greatness, but rather of his unworthiness and after many hours of prayer he was able to communicate of the precious Body and Blood of Christ. A few months later another priest came to serve at the hospital and Elder Ieronymos never again served the Divine Liturgy, feeling himself wholly unworthy. 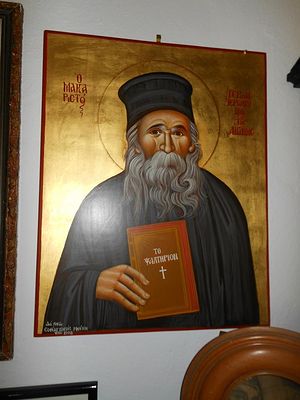 Of course there is much more that could be told of the elder, who spent his remaining years continuing to console his spiritual children as their elder, pouring himself out for the sake of their salvation, retreating often to his tiny cell to speak to the Lord. By this point Mother Eupraxia had grown tired, and I had to make my way to the port to catch a boat back to Piraeus. The atmosphere of the Annunciation Convent was one of joy, peace, humility, and servitude—the atmosphere instilled in it by the sanctifying life and presence of Elder Ieronymos. His life was one of humility, which led him to the heights of the spiritual life, of which we are given the slightest glimpse in the recounting of the vision he beheld during the Liturgy. The life of humility is the life of Christ, and in return he experienced the very life of Christ in visions of the living Christ, becoming even greater than Sts. Dionysios and Nektarios, in their own words.

While I knew little more than his name and his reputation as a holy elder before visiting Aegina, I left with a greater respect and feeling of connection with him, which often happens when one makes the effort to visit a holy site. The saints continue to live in Christ, and there can be no doubt that Aegina continues to be the home of St. Dionysios, St. Nektarios, and also, the great elder Ieronymos, and may we know the benefit of his prayers. 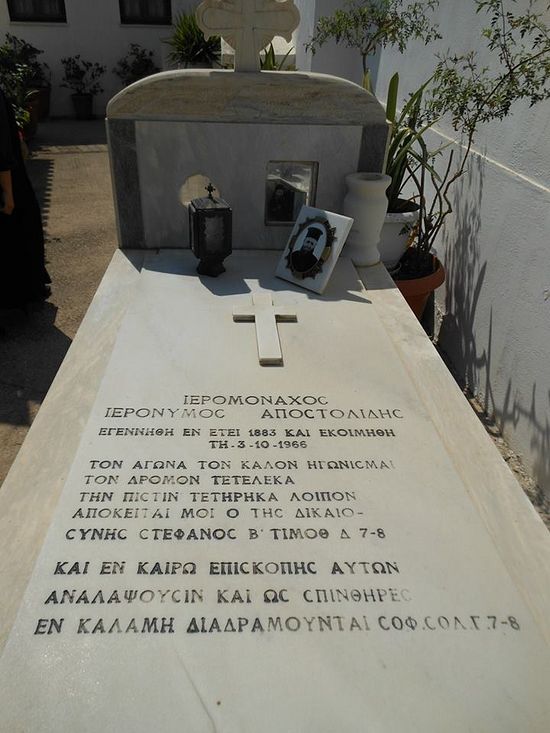 The grave of the elder A Contemporary Voice From Holy Russia: Elder Zosima (+ 2002)
Reposed August 16/29
The main lesson of the Elder was that the greatest joy is the joy of living with God, which nothing can ever take away. He taught this in his life, he taught this also in his death. Those who saw the Elder's face in death, saw joy and an unearthly rejoicing on it. After his holy repose, many saw the Elder in dreams, announcing: “I am still alive” and “Zosima is risen.” In particular he left in his will instructions regarding the Church. He prophesied difficult times for the Ukraine, instructing all to follow and be faithful to the Russian Orthodox Church. An Optina Elder. A Story
Olga Rozhneva
“Well, that is that,” she thought. “It did not work… It was stupid of me to even hope… The Elder has more than enough things to do without having a conversation with every old woman who wants to talk to him!” The very next day, the phone rang, and, interrupting her daily tasks, she picked up the receiver. She picked it up, and almost dropped it again, for it was batiushkahimself who was calling! And he invited her to come see him at the metochion.
Comments