Fr. Dumitru Staniloae: The Cross as a Means of Sanctification and Transformation of the World

October 5 marks the anniversary of the repose of the renowned Romanian theologian Fr. Dumitru Staniloae. His many works include commentaries on the Church Fathers, a Romanian translation of the Philokalia, and his 1978 masterpiece Orthodox Dogmatic Theology. Fr. Dumitru endured several years of imprisonment for his faith at the hands of Communists, after which he began to work for the Romanian Holy Synod and often traveled to international conferences to share his theological vision. He reposed in 1993 at the age of ninety.

Below we offer his work on "The Cross as a Means of Sanctification and Transformation of the World" in honor of his memory: 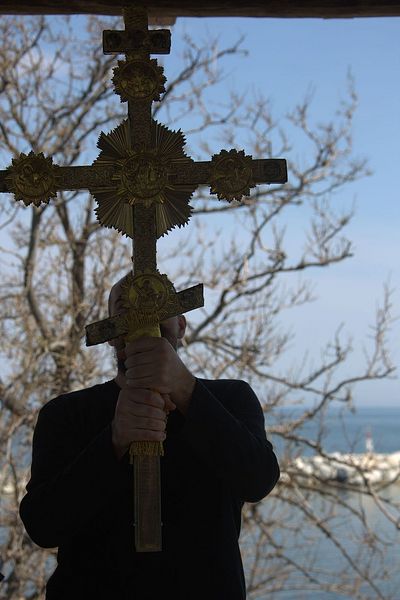 Through the Cross, Christ sanctified His body—the link with the world. He rejected the temptations sent to Him by the world, that is to taste the pleasures, to satisfy His needs unrestrained or to avoid pain and death. If we, in the same way, ward off the temptations of sin and patiently suffer the pain of death, sanctity can spread from His body to all bodies and throughout the world.

The Orthodox Church doesn’t say that, through the Cross, Christ left creation, but that He restored it to paradise—the paradise of virtue for those who, out of love for Him, accept His Cross. So the Cross is Christ’s power which, if we adopt it, can bring the world to paradise. For this purpose, Christ remains with us until the end of time. Without doubt, the real paradise will come about only after the resurrection of the world.

Creation was turned into a battlefield between people because of greed and selfish passions in general. But it can be restored to its paradisaical state through the Cross. At the feast of the Elevation of the Precious Cross on September 14, the Orthodox Church sings: “In paradise of old, the wood stripped me bare, for by giving its fruit to eat, the enemy brought in death. But now the wood of the Cross that clothes us in the garment of life has been set up in the midst of the earth and the whole of the world is filled with boundless joy” (Sessional Hymn of the Feast). This is why paradise opened again, because the “flashing sword” (Gen. 3, 24) which blocked entry to it because of human greed, was unable to keep it closed. Because now Christ entered paradise, having opened it, in human form bearing the wood of the cross, through which He had conquered greed, and had preferred renunciation of His self. And all of those who do the same will also enter paradise.

It’s certain that there’s a paradise into which the souls of the faithful enter after death. But there may also be an evolving paradise here on earth, a restitution of the original paradise. It may evolve through the Cross, which is raised in the midst of the earth and which people accept as the rule of their lives. The paradise of the souls of the faithful after death already exists thanks to their earthly lives, which follow the spirit of the Cross. In the end, the evolving earthly paradise will become the perfect and eternal paradise after the resurrection of the bodies.

But without the effort to make the earth, to some extent, paradise, it would never progress towards the paradise beyond. It’s for this purpose that Christ remains with us to the end of the world.

We already have on earth an approximation of the eschatological paradise. In another hymn, the Orthodox Church sings: “What marvelous wonder! The most holy Cross, the life-giving Tree, is lifted up on high today and shown to the world. All the ends of the earth give glory, all the demons take fright; how great a gift is bestowed on us mortals!” (Sticheron at Lauds, Elevation of the Cross). 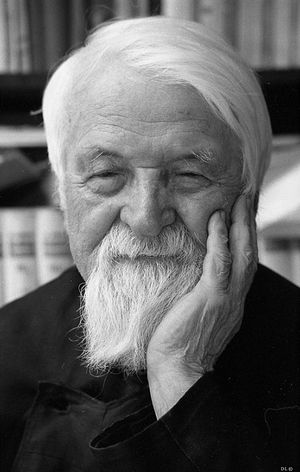 Fr. Dumitru
The role of the Cross in the sanctification and transformation of the world is apparent in all the hymns of the Orthodox Church. Just as the body of the Lord was sanctified through the Cross, so our own bodies are sanctified , as is our relationship with the world and as is the world itself. We receive sanctification through the power of Christ, within which the Cross retains its presence and is an extension of His understanding, patient, sinless attitude towards the world, and becomes a hymn of praise to the Father, an offering to Him of all the relationships in the world.

This is why, in the Orthodox Church, all persons and all things are sacrificed and offered through the Cross. Christians make the sign of the Cross and seek the strength to behave with purity towards the world. They also declare their wish to be elevated themselves through their effort; to glorify God through all their actions and sufferings in the world, even through their death; to live and to die for God, to demonstrate in every way that they’re sacrificing themselves for Him. Through the Cross, the Church sanctifies everything: water, with which it sprinkles the faithful, food, houses, gardens and fields with their produce, the gifts which are offered to God. The Cross sanctifies all of them, it purifies them insofar as they’re cleansed, making God, their Lord, transparent. The Cross places them, among all other things, in communication with God. Everything’s offered as presents to God. All our Church services begin and end with the sign of the Cross. All the main gestures of worship are associated with the sign of the Cross, because the very power of Christ is passed down through the sign of the Cross, to the extent that, in making it, we invoke Him. With this sign, the faithful come to meet the power of Christ, promising that they’ll offer a pure sacrifice to God, that they’ll act with purity in every act of theirs in the world. This is why the sign of the Cross is always accompanied by an invocation to the Holy Trinity. Because it’s the Trinity which actuates our salvation and it’s where the divine power comes from which is active in the world, in order to sanctify and transform it. This is made manifest through the Cross in the world.

The power of the Cross doesn’t only purify the faithful and their relationship with the world, but also the world itself. The Cross puts to flight those demons which cause evil and launch temptations through water, wine, fruit, and human beings.

The faithful believe that, by making the sign of the Cross, in all their actions and on all the paths of their lives, at every contact with nature and people, they have the Holy Spirit as support. There’s a special connection between the Holy Spirit and the Cross, because the latter is the human effort at purification, while the Holy Spirit is the purifying divine power. Both need to be in tandem.

The Cross is the cleansing force of the universe. And when we make the sign with faith and determination, for a pure life in the world, the power of the Spirit of Christ comes, of Him Who was pure in the world. And we avoid sin and await death. The Cross gives us this power of Christ because, bearing it in mind, we want to imitate its example and behave in the world without selfish passions, in a spirit of mature restraint, peace and concord with others.

Only the Cross, by taming our selfish passions and loosening our excessive attachment to the world, which is held to be the only reality, can bring lasting peace among people and nations.

The Holy Fathers have declared that the sight of God in the world, or the transparency of God in the world, depends on our purification from the passions. This idea was elaborated theoretically, in a particular manner, by Saint Maximus the Confessor. According to him, when we look at things and are free of the passions, we restore their true meaning, that is the transparency of God through them: “Meaning is affected by passion; complex thinking consists of passion and meaning. If we separate passion from meaning, what’s left is sublime thinking.” (400 Chapters on Love III, 43, PG, 90, 1029). This doesn’t mean the destruction of the world, but rather the re-discovery of the truths of its meanings—which haven’t been distorted by the passions—and of its divine transparency.

When we take up the Cross, we become, by the power of the Cross of Christ, a new creation (2 Cor. 5, 16-17) as Saint Paul says. In this condition we see everything [as being] from God (2 Cor. 5, 18), as he goes on to say. In this way we prepare creation to attain the state of liberation to which we, too, will attain: as children of God and not as slaves to the world and the passions any longer. Because the world doesn’t rejoice either at the state of decline into which we, having fallen, have dragged it and become its slaves, instead of its masters. The state of freedom to which we’ll attain corresponds to the state of glory in which we can make the world a partaker, too (Rom. 8, 31).

Creation is still in its birth pangs as regards this true and new condition of its existence. They’re the pain of the Cross, which you bear without sin. The Cross is confirmed as the only means through which the world passes on to a new form of existence, where God becomes visible as He Who is all things to all people. He’s the only way that we can come to the most splendid supper, where knowledge of the Divine Word abounds, where creation makes Him transparent in all His fullness and we enter into direct and pure dialogue with Him. So the whole world will be manifested in Him and in us, as the common content of the dialogue, as a luminous transparency through which He will become known to us in all the riches He has given us (Saint Maximus the Confessor, Ambigua, P.G. 91, 1373).

All of this will take place thanks to the Cross of Christ, if we accept it as our own. Only through the light and the power of the Cross, which will appear in the sky, the sign of the Son of Man at His glorious Coming (Matth. 24, 30), will the world prove to be, in the end, a new heaven and new earth (Rev. 21, 1).

Protopresbyter Dumitru Staniloae, Στο φως του Σταυρού και της Αναστάσεως (Ιn the Light of the Cross and Resurrection), The Holy Monastery of the Transfiguration of the Saviour, Kymi, pp. 27-35.

Romanian Church Considers Popular Monk For Sainthood
The Metropolitan of Transylvania said Thursday it had begun the lengthy process of canonization for Arsenie Boca, a Romanian Orthodox monk and priest whose grave in western Romania attracts tens of thousands of pilgrims every year. Elder Arsenie (Papacioc) of Romania
†July 19
Archimandrite Arsenie (Papacioc)
Elder Arsenie Papacioc of Romania, blessed memory, was part of the great generation of confessors for Christ that had suffered much while imprisoned for their faith under the atheist [communist] regime of the east. His words, not academic but rather simple, down to earth, have great authority as they are spoken from an experience of suffering and with a burning love for everyone.