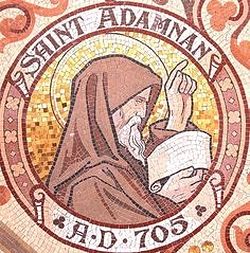 St. Adomnan
St. Adomnan (also Adamnan, Eunan) was born in Ireland in about 625, approximately on the site of the present-day small town of Raphoe in County Donegal in Ulster. His father’s name was Ronan and his mother was called Ronat. The venerable man studied at one of the monasteries founded by St. Columba of Iona (who was probably a distant relative) in Ireland before he moved to Scotland. The young Adomnan soon became famous for his learning, brilliant knowledge of the Holy Scriptures and theology, fine teaching abilities and holiness of personal life. It is believed that for a short time Adomnan studied and taught at the Irish Monastery of Durrow. Historians suggest that for some time the saint headed the Skreen Monastery in the Irish county of Sligo; the area where this monastery stood once was known as “the Seals’ Hill”. 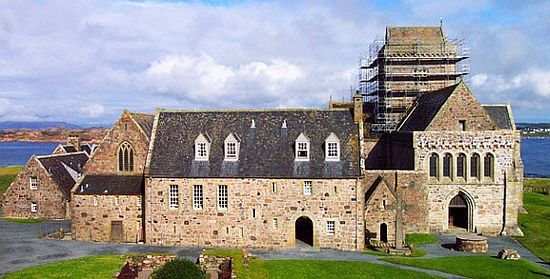 Later the man of God moved to Scotland, to the great monastery of Iona, where he led the monastic life under Abbot Segene. In the year 679, aged about fifty-five, Adomnan himself became the tenth abbot of this prominent monastery and, thus, one of the successors of great Columba. Adomnan was one of the wisest and most active abbots in the whole history of Iona. From time to time he made journeys to the north of England and Ireland to spread the Good News of Christ. He also undertook a successful mission to the Scottish area now known as Perth and Kinross, especially to the long glen (a narrow valley in Scotland) called Glen Lyon. 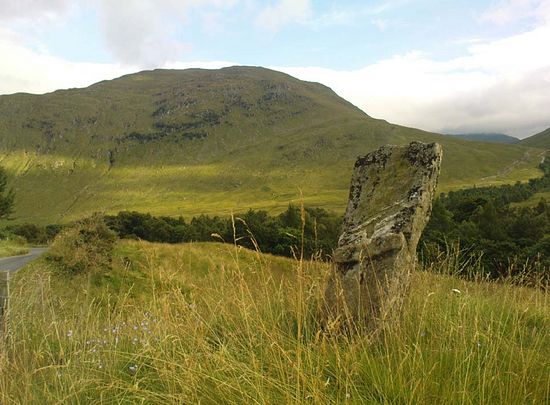 In about 686 St. Adomnan visited the English kingdom of Northumbria to hold negotiations with king Aldfrith (his former student in Ireland) regarding the liberation of sixty Irish captives who had been captured by Aldfrith’s predecessor, King Ecgfrith. While the negotiations were being held, the Abbot of the Monastery at Wearmouth, St. Ceolfrid, convinced Adomnan of the correctness of the Roman practices and customs (22 years before at the Synod of Whitby the English Church had decided to institute the practices of the Orthodox Church of Rome in the British Isles, but the Celtic Churches of Scotland, Ireland and Wales complied with this decision and adopted these practices only several generations later). Thus Adomnan accepted the Roman method of the calculation Easter (which was used by all the Orthodox Churches) and other traditions of the old Patriarchate of Rome. However, the monks on Iona did not wish to abandon their age-old Celtic customs, so the holy abbot had for some time to leave Scotland and return to his native Ireland.

In the year 692 Adomnan took an active part in a number of Church councils which were held in present-day Northern Ireland and had great success. At the Synod of Birr in 697 the man of God spoke for the introduction of the Roman Paschal cycle in the churches of northern Ireland. By that time the whole Orthodox world followed this Paschal cycle, which was accurate, as opposed to the old and mistaken one which the Celts still adhered to at that time. In the same year the saint secured the exemption of women and children from compulsory military service (a purely pagan custom) and worked out the regulations that provided for the protection of children and clergy: Specifically, they exempted priests from military obligations. “The Law of Adomnan”, also known as “The Law of Innocents”, was like a statute book, and it rapidly spread all over Ireland. In this way Abbot Adomnan played an important role in both the spiritual and social life of the country, gaining the love and gratitude of the Irish.

St. Adomnan in due time returned to Scotland and ruled the holy Monastery of Iona until his repose. At the request of the monks he wrote the most famous version of the Life of St. Columba which survives to this day. This is one of the most vivid and outstanding hagiographical works of the period and it is still read today. St. Adomnan is also the author of the book, On the Holy Sites—a description of the shrines of the Holy Land based on the account of a Frankish bishop who had been shipwrecked near Britain. Adomnan personally knew this bishop, who told him about the holy places not only of Palestine, but also of Gaul, Egypt and Constantinople. The composition of many beautiful poems in Gaelic is attributed by many scholars to Adomnan as well. Later the book, The Vision of Adomnan, was compiled in Ireland. It told of the spiritual insights and revelations received by Adomnan. This account enjoyed wide popularity in the Middle Ages.

St. Adomnan reposed in peace in the Lord in the year 704 (according to another version, 705) as a very old man, venerated by all for his exemplary holy life and many years of labors for the good of the Holy Church. Unfortunately, he did not live to see the moment when Iona accepted the Orthodox method of calculating Easter—this happened in 716. After the repose of St. Adomnan his veneration spread all over Scotland and Ireland. Residents of both Scotland and Ireland venerated him as one of their main intercessors and patrons who contributed greatly to their history. Remarkably, the saint remained a peacemaker even after his repose and took care of his people. This can be illustrated by the following story. St. Adomnan’s relics rested on Iona for nearly a quarter of a century. But in 727 a conflict between two clans flared up in Ireland. Hoping that by the grace of God and through the prayers of St. Adomnan a truce could be reached, the monks brought the saint’s relics to Ireland and visited forty churches that administratively belonged to Iona. And indeed, it became possible to reach a truce very soon. Many people took an oath on the holy abbot’s relics and promised to obey “The Law of Adomnan”.

The shrine of St. Adomnan was twice desecrated by the Vikings: first in the ninth century and then again exactly 200 years later in the eleventh century. 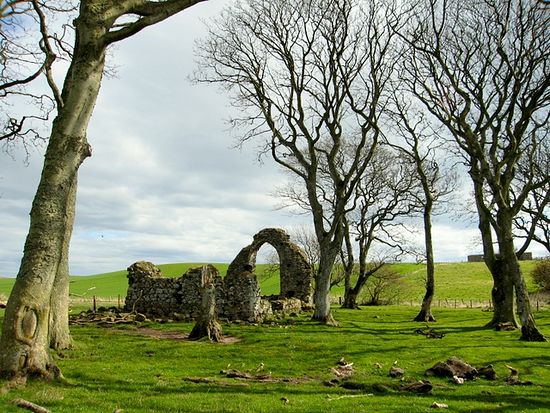 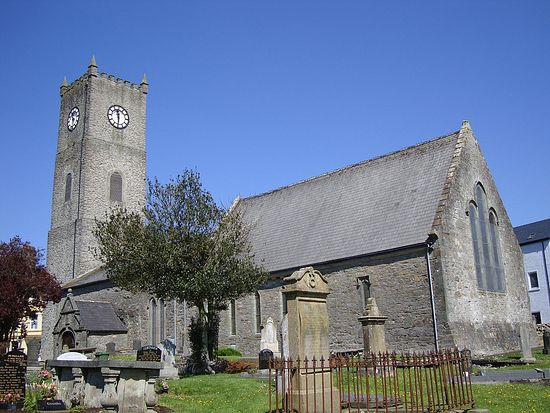 Numerous churches in the Scottish County of Aberdeenshire, in the Angus area and in the Hebrides were from ancient times dedicated to St. Adomnan. Ruins of the chapel dedicated to St. Adomnan can be found at Nether Leask in Aberdeenshire to this day. In Ireland from time immemorial there were churches in honor of this saint in the counties of Donegal, Sligo and Derry. In the town of Raphoe in Donegal, the supposed birthplace of Adomnan, an Anglican Cathedral belonging to the Church of Ireland is dedicated to him and it is known as “The Cathedral Church of St. Eunan”. A monastery had been established by St. Columba on this site several decades before the birth of Adomnan. In the Middle Ages, churches were built in memory of both these saints in this town. 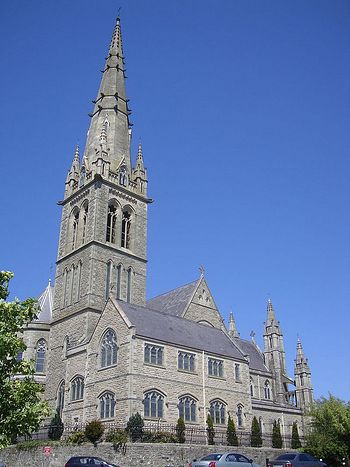 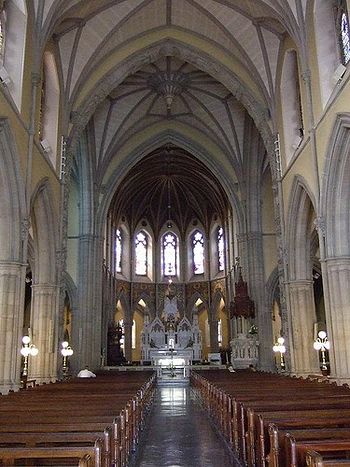 Central aisle of the Cathedral of Sts. Columba and Adomnan in Letterkenny, Donegal

Significantly, there is a joint Anglican Diocese of Raphoe and Derry in the Church of Ireland, which unusually has two cathedrals—the Raphoe Cathedral of St. Adomnan and the Cathedral of St. Columba in the city of Derry—another visible link between these two saints. St. Adomnan is the patron-saint of the Roman Catholic Diocese of Raphoe. Along with St. Columba he is also the patron saint of the Catholic cathedral in the town of Letterkenny, which stands on the River Swilly in Donegal (the Cathedral dates back to the late nineteenth century). This church was built in the Victorian Neo-gothic style, and scenes from the Life of Adomnan are depicted on its great inner arch. The Cathedral has twelve bells, each of which is named after an Irish saint who in one way or another is connected with the area, including St. Adomnan. A college in Letterkenny is called after Adomnan as well. 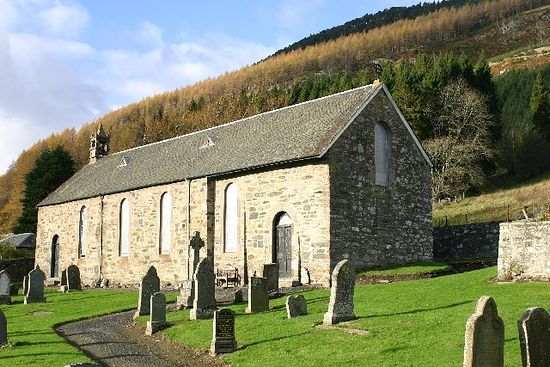 The Dull church, Perth and Kinross

In Scotland, there are several important surviving relics in memory of Adomnan in Glen Lyon where he actively evangelized. One of them is the early 8th-century bell known as “The St. Adomnan’s bell” which is kept in the church of the village Innerwick, another relic is the large ancient St. Adomnan’s cross standing by the roadside two miles away from the Innerwick church. In the same glen, there is also a very ancient church (now unused) in the village of Dull in Perth and Kinross which stands on the site of a monastery founded there by Adomnan. Early crosses and a font dating to that period were discovered near the church by the archaeologists not long ago, precisely on the territory of the former abbey. 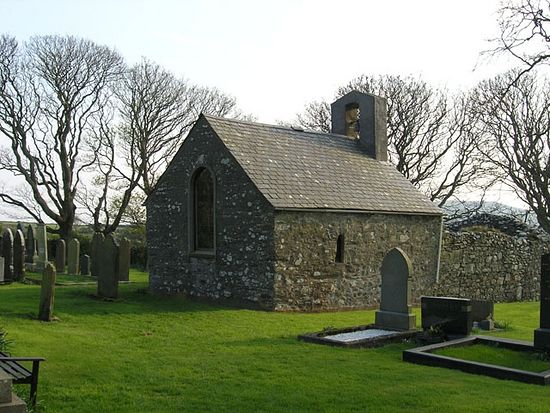 St. Adomnan's Church in Lonan, the Isle of Man

Finally, there is a very old church of St. Adomnan situated in the parish of Lonan in the eastern coast of the Isle of Man. This temple is also called “the old Lonan church”. Its origins are not very clear but in the Middle Ages the land on which it stands belonged to the St. Bees Priory in Cumbria. There are a number of Celtic crosses at the churchyard of the St. Adomnan’s Church, the oldest of them dates back to the fifth century!

Holy Father Adomnan, pray to God for us! Saint Bega, Anchoress of Cumbria
Commemorated: September 6/19 and October 31/November 13
Dmitry Lapa
St. Bega is said to have been Irish. She was a virgin who led a holy life in north-western England. The legend says that she was an Irish princess, the most beautiful in her kingdom, who fled from her native land to avoid marriage with a pagan Viking—a Norwegian prince. Guided by an angel, Bega refused a pagan husband, as she wanted to devote her life to the Heavenly Bridegroom—Christ. Saint Senan, Abbot of Scattery in Ireland
Commemorated March 8/21
Dmitry Lapa
Notably, the saint had so many disciples whom he instructed, that every time he left the monasteries he had established he blessed dozens of them to remain and live there and blessed the most experienced ones to be in charge of these communities. Saint Colman of Kilmacduagh in Ireland, Wonder Worker
Commemorated: October 29/November 11
Dmitry Lapa
St. Colman’s zeal and thirst for spiritual perfection were so strong that with time he resolved to leave the island monastery and to retreat to a remote and quiet place to pray more deeply.